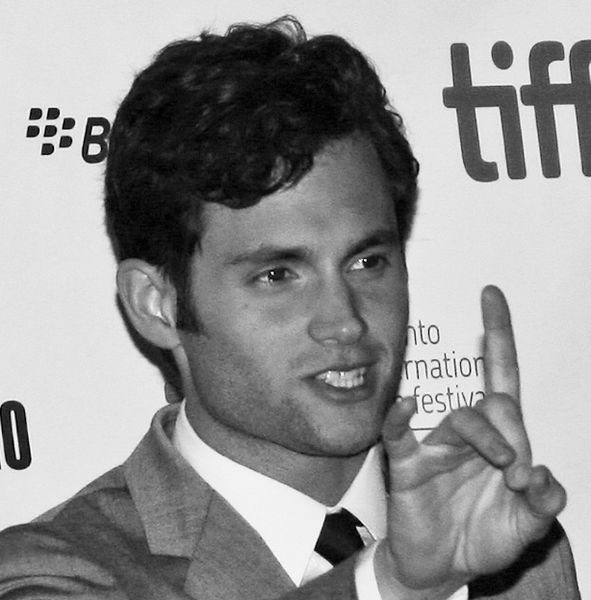 Badgley was born in Baltimore, Maryland, the son of Lynne Murphy and Duff Badgley, who worked as a newspaper reporter and also a carpenter; Duff was the Green Party candidate for governor of Washington in 2008.[2][3] His parents divorced when he was 12.[4] Badgley split his childhood years between Woodlake, Virginia and Seattle, Washington. He attended Woolridge Elementary, where his mother became PTA president[5] before he transferred to St. Christopher's School. He enjoyed playing youth soccer, where his father coached.[citation needed] He attended Charles Wright Academy in Tacoma, Washington, and was involved with the Seattle Children's Theatre. He soon began doing voice-overs for children's radio stations.

At age 11, Badgley relocated to Hollywood and began pursuing an acting career. He also sought a singing career during this time, and recorded a pop single in 1998.[6] At the age of 14, Badgley completed his California High School Proficiency Exam and began attending Santa Monica College.[4] He was later accepted to the University of Southern California, where he deferred admission due to contractual obligations, but then later enrolled at Lewis & Clark College in Portland, Oregon, for two years.

Badgley's first credit was voice work for the video games Mario Golf 64 and Mario Tennis 64 in 1999 and 2000.[6] His first screen acting credit was on an episode of Will & Grace and he subsequently appeared on shows such as Daddio, The Brothers García, and What I Like About You.[7] His first noticeable role was as Phillip Chancellor IV on the soap opera The Young and the Restless, from 2000 to 2001. He was nominated for a 2001 Young Artist Award for Best Performance in a Daytime Series for his work.[8]

In 2002, he starred in The WB's comedy-drama series Do Over as Joel Larsen, a 34-year-old man who gets a second chance to get his life right, thanks to a freakish accident that catapults him back to 1980, as a 14-year-old. Badgley went on to star in two other WB series: The Mountain (2004-2005) and The Bedford Diaries (2006).[7] Badgley's first major film credit was 2006's John Tucker Must Die, playing the role of Scott Tucker.[9] In its opening weekend, the film grossed a total of $14.3 million, ranking third in the US box office results for that weekend.[10] Badgley later appeared in Drive-Thru, co-starring future castmate Leighton Meester.[11]

In 2007, Badgley was cast in The CW's teen drama series Gossip Girl as Dan Humphrey, based on the book series of the same name by Cecily von Ziegesar. He initially turned down the role, but accepted after the producers struggled finding someone to fill the role.[12] In 2009, he starred in thriller film The Stepfather, a remake of the 1987 film, as the stepson of the serial killer.[13] Badgley then played Todd, the romantic interest of main character Olive (Emma Stone), in the 2010 teen romantic comedy Easy A.

In 2011, he was named one of People's "25 Beauties (and Hotties) at 25"[14] and BuddyTV ranked him number 75 on its "TV's 100 Sexiest Men of 2011" list.[15] He also appeared in the financial thriller drama Margin Call (2011).[16] In late June of that year, Badgley reportedly would portray Jeff Buckley in Greetings from Tim Buckley. The movie follows the journey Jeff Buckley took in grappling with the legacy of his late musician father, Tim, leading up to and culminating with his legendary 1991 performance of his father's songs.[17] For the role, Badgley said he took guitar and vocal lessons.[18] Badgley joined the cast of Parts per Billion in December 2012, opposite Alexis Bledel and Teresa Palmer.[19] The film was released in 2014.[20]

Badgley joined the cast of the 2013 adaptation of Cymbeline as the orphan Posthumus.[21] In early 2014, Badgley and bandmates released a song titled "Easy" on SoundCloud under the name M O T H E R; the song quickly gained popularity and was posted on numerous blogs.[22] Months later, the band changed the spelling to MOTHXR, citing a cease-and-desist from another band with a similar name.[23] In 2015, the band signed with the labels Kitsuné and Washington Square Music, the New York City-based subdivision of the Razor & Tie label.[24] The band has supported acts such as Streets of Laredo, San Cisco, Sir Sly, Har Mar Superstar, The Neighbourhood, and Miami Horror. Their debut album, Centerfold, was released February 26, 2016.[25][26]

Badgley had a recurring role in NBC's 2015 miniseries The Slap, based upon the Australian series of the same name.[27] He had a minor role in Adam Green's Aladdin[28] and starred in Lifetime's television adaptation of You as Joe Goldberg, which premiered on September 9, 2018.[29][30][31]

During the 2008 United States presidential election, Badgley expressed his support for Barack Obama over John McCain. Badgley and Blake Lively appeared in a pro-Barack Obama commercial, as part of MoveOn's Youth Vote program. The commercial, directed by Doug Liman, aired during Gossip Girl on The CW, MTV, and Comedy Central.[32] In March 2010, the American Red Cross announced Penn Badgley as a member in National Celebrity Cabinet, a group of celebrity supporters who promote Red Cross services.[33] A "huge soccer fan", Badgley joined forces with Brad Pitt to bring the FIFA World Cup to the United States in 2018 or 2022.[6][34]

Badgley is a friend of Baltimore activist DeRay McKesson,[35] whom he met during the Occupy Wall Street movement, and considers himself an ally of the Black Lives Matter movement.[36][37] Badgley wants the police brutality dialogue to include women victims.[38] Badgley is also a LGBT rights activist.[39]

In 2014, Badgley began a relationship with singer Domino Kirke. They married in a New York courthouse on February 27, 2017.[40] Through this marriage, Badgley has one step-son.[41]