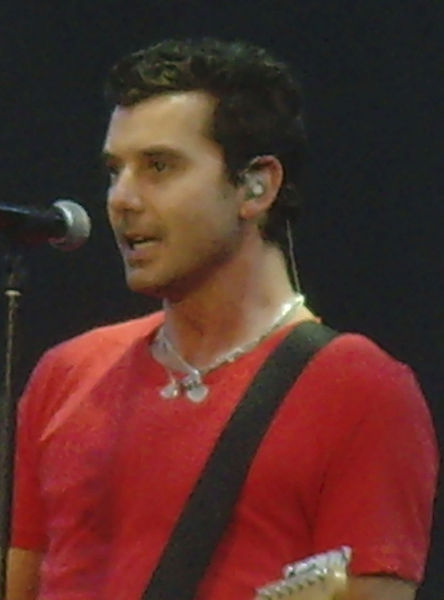 Gavin McGregor Rossdale (born 30 October 1965)[citation needed] is an English singer, songwriter, musician, actor, and the lead singer and rhythm guitarist of the rock band Bush. He helped form Bush in 1992; upon its separation in 2002, he became the lead singer and guitarist for Institute, and later began a solo career. When performing solo, Rossdale plays songs from his musical libraries.[1] He was ranked at 100 in the Top 100 Heavy Metal Vocalists by Hit Parader. In 2013, Rossdale received the British Academy's Ivor Novello Award for International Achievement.[2]

Rossdale was born in Marylebone, London,[citation needed] the son of Barbara Stephan (née Bowie) and Douglas Rossdale, a doctor. His mother was born in Scotland, whereas his father was of Russian-Jewish descent, with the family's surname originally being Rosenthal.[3][4] His parents divorced when he was 11, and he was raised by his father and aunt. His mother remarried and moved to Tampa, Florida. Rossdale has a younger sister, Soraya, and an older sister, Lorraine. His half-sister, Georgina, is a doctor. Rossdale learned to play bass guitar after hanging out with Lorraine's boyfriend, who was in a band, but he switched to rhythm guitar.

At 17, Rossdale left Westminster School and formed a band called Midnight, which produced a couple of singles and many publicity photos. In 1991, Rossdale moved to Los Angeles for six months, lived wherever was available in the city, and took whatever part-time jobs he could, including as a production assistant on music video shoots. He then spent some time in New York City before returning to England, where he reconnected with his future manager Dave Dorrell (MARRS), whom he had previously met in Los Angeles. In 1992, Rossdale formed Future Primitive; its original line-up included Sacha Gervasi, who left to become a filmmaker. The band changed its name to Bush in the summer of 1994 and released the promo Sixteen Stone.

Rossdale has been the lead singer and songwriter for the British post-grunge rock band Bush since its inception. Their debut album, Sixteen Stone (1994), was a huge commercial success.[5] Almost overnight, Bush went from playing small pubs in London to headlining arenas in the US, the result of extensive, non-stop touring. However, some critics labelled them as an inferior derivative of bands such as Nirvana and Pixies, and this criticism followed them throughout their career as a band. In particular, Rossdale's forced, raspy singing voice and random, stream of consciousness-style lyrics were dismissed by some as an imitation of Nirvana's lead singer, Kurt Cobain.[6] Although the band reached superstar status in the US, they failed to have much impact in the UK, which at the time was preoccupied with Britpop.[7] The sole exception to this was their single "Swallowed", which reached Number 7 on the UK charts. A change in record labels and management did not bode well for the band, who disbanded in 2002.[8]

Bush's albums include the aforementioned Sixteen Stone, Razorblade Suitcase, Deconstructed, The Science of Things, and Golden State. All albums had success in terms of albums sales, which led Bush to be one of the best selling rock groups to come out of the nineties.[9]

In 2004, after Bush had been on hiatus for two years, Rossdale formed Institute. Their album, Distort Yourself, released on 13 September 2005 achieved moderate success and the single "Bullet Proof Skin" was used in the motion picture Stealth. In an interview published in November 2008, Rossdale noted that the Institute record was, "for all intents and purposes, a solo record. It was just a bad marketing decision to call it something else".[11] Institute broke up in 2006, after one album.

In 2007, Rossdale announced on his website that he was working on new music for a solo album. He wrote that he was very happy with the sound of the album, citing he went back to his roots with Bush. Rossdale's single, "Can't Stop the World," is the introduction theme to Fox's programme, Drive. That year, he covered John Lennon's "Mind Games" for the album Instant Karma: The Amnesty International Campaign to Save Darfur. Later that year, he finished recording his first solo record titled Wanderlust, released 3 June 2008. Gwen Stefani, Rossdale's then wife, sang background vocals on the track "Can't Stop The World", with other vocalists on the album including Shirley Manson, Katy Perry and Dave Stewart[12] Bush and Institute guitarist Chris Traynor also played on the album. He also made a guest appearance on the DT8 Project album Perfect World, taking lead vocals and co-writing the track Falling.

On 1 April 2008 the first single from WANDERlust, "Love Remains The Same", was released through digital retailers. It entered the Billboard Hot 100 at Number 76, rising to 27 in October 2008, giving Rossdale his first Top 40 hit since the days when he fronted the post-grunge band Bush. Rossdale mounted a full-scale solo tour in Spring 2009.[13] Of the album's title, Rossdale said, "I just liked it because it's kind of sexy enough, it's powerful, it's one word. Wanderlust sums up that desire for music and for singing and performing and this life."[14]

Rossdale also provides the vocals for the Apocalyptica song "End of Me," which is the lead single from their latest album 7th Symphony.[15]

Rossdale was a featured vocalist on Santana's 2010 album Guitar Heaven: The Greatest Guitar Classics of All Time performing a cover of T. Rex's "Get It On".

Rossdale was also a judge for the 10th annual Independent Music Awards to support independent artists' careers.[16] In 2013, Rossdale was awarded in the Ivor Novello Awards, for International Achievement in Songwriting, which was presented to him by Chris Martin.[17][18] On 27 October 2017, Rossdale sung with Linkin Park at their special memorial concert in memory of vocalist Chester Bennington. He performed the song "Leave Out All the Rest".

Rossdale appeared in the film Constantine (2005) playing the half-demon Balthazar.[19] He has also appeared in the films Zoolander (2001), Mayor of the Sunset Strip (2004), Little Black Book (2004), the Game of Their Lives (2005), How to Rob a Bank (2008), and The Bling Ring (2013). Additionally, he appeared in the crime drama television series Criminal Minds in the episode "The Performer" (2009), portraying a rock star named Paul Davies who takes a vampire-like alter-ego named Dante whose music is involved in a string of exsanguination murders.[20] Rossdale has also appeared in the eighth episode of season 5 of Burn Notice,[21] and appeared as villain Johnny Moreau in the 100th episode of Hawaii Five-0 in November 2014.[22]

In his 1995 autobiography Take It Like A Man, Boy George wrote that Rossdale had a relationship with Peter Robinson, also known as Marilyn, in the 1980s. In a 1996 interview for Rolling Stone, Rossdale responded, "That's George's take - he doesn't know me. There's a queue of people going to their lawyers about stuff in his book. I hope he manages to sell some books by putting my name in there."[23] Elsewhere, both Rossdale and Robinson initially denied the story[24][25] but in 2003, Robinson dedicated the Marilyn single "Hold on Tight" to Rossdale, citing "the years of our passionate relationship" and featuring a photo of them together on the cover.[26] Later, both men spoke more candidly about their relationship, with Robinson confirming in 2009 that they had been "together five years" in the 1980s,[25] while in 2010, Rossdale said the relationship with Robinson had been an experimentation and "part of growing up".[27][28][29] Robinson later called Rossdale "the love of my life".[25]

In 1995, Rossdale met Gwen Stefani, lead singer of the rock band No Doubt, when Bush and No Doubt were on tour together.[30] During a break with Stefani, Rossdale dated Hole frontwoman and Kurt Cobain's widow Courtney Love for eight months in 1995 and 1996. Love commented, "Everyone gave me so much shit, because Gavin sounded a lot like Kurt."[31][32] Rossdale then married Stefani in 2002. In 2005, on the radio show Loveline,[citation needed] Rossdale said that he and Stefani preferred to keep their relationship entirely out of the media because he grew up in a chaotic home and that having a stable environment for his family was important to him. The two have three sons together: Kingston James McGregor Rossdale (born May 26, 2006), Zuma Nesta Rock Rossdale (born August 21, 2008), and Apollo Bowie Flynn Rossdale (born February 28, 2014). On 3 August 2015, Stefani filed for divorce from Rossdale, citing irreconcilable differences.[33] The divorce was finalised in April 2016.

In 2004, a paternity test revealed that Rossdale was the father of Pearl Lowe's daughter, Daisy (born 1989); Rossdale and Pearl had had a brief relationship, and Rossdale had been Daisy's godfather.[34][35][36] Rossdale subsequently cut off all contact with Pearl and Daisy,[37][38][39] but in 2009, several websites published photos of Daisy walking with Rossdale's son in London.[40][41] Both Daisy and Rossdale said in 2010 that their relationship is good and based on respect.[42]

Rossdale and his band are members of Canadian charity Artists Against Racism and have worked with them on campaigns like radio PSAs.[43]