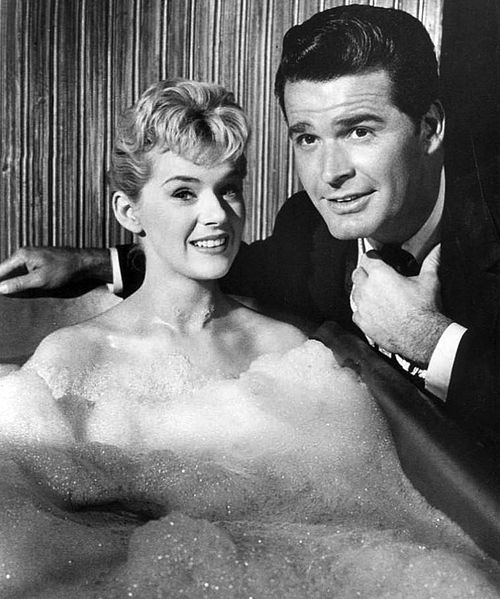 Stevens was born Concetta Rosalie Ann Ingoglia in Brooklyn, New York, the daughter of musician Peter Ingoglia (known as Teddy Stevens) and singer Eleanor McGinley. Her mother was of half Irish and half Ashkenazi Jewish ancestry.[1] Stevens is of Italian, Irish, German-Jewish and Polish-Jewish descent. She adopted her father's stage name of Stevens as her own. Her parents divorced and she lived with her grandparents and attended Catholic boarding schools.[1] Actor John Megna (1952-1995) was her half-brother.

At the age of 12, she witnessed a murder in Brooklyn and was sent to live with family friends in Boonville, Missouri.[2]

Coming from a musical family, Stevens joined the singing group called The Fourmost[3] with Tony Butala, who went on to fame as founder of The Lettermen. Stevens moved to Los Angeles with her father in 1953.

When she was 16, she replaced the alto in a singing group, The Three Debs.[3] She enrolled at a professional school (The Georgia Massey Professional School in the San Fernando Valley), sang professionally, and appeared in local repertory theater.[citation needed]

Stevens started working as a movie extra and stand-in.

Her first notable film role was in Young and Dangerous (1957) with Mark Damon, a low budget teen movie. She could also be seen in Eighteen and Anxious (1957); an episode of The Bob Cummings Show ("Bob Goes Hillbilly"); and a teen car chase movie, The Reckless Age (1958) aka Dragstrip Riot.

Stevens' big break came when Jerry Lewis saw her in the latter and recommended her for Rock-A-Bye Baby (1958) as the young girl who loves Lewis, made at Paramount.[4][5] In December 1957 she signed a seven year contract with Paramount starting at $600 a week going up to $1,500 a week.[6]

Stevens made another film with Damon, The Party Crashers (1958), also at Paramount. Paramount dropped her.

Like many Warners contract players, Stevens was kept busy guest-starring on their regular TV shows like The Ann Sothern Show, Maverick, Tenderfoot, 77 Sunset Strip and Cheyenne.

Stardom came when she was cast as Cricket Blake in the popular television detective series Hawaiian Eye from 1959 to 1963,[8] a role that made her famous; her principal costar was Robert Conrad.

In a televised interview on August 26, 2003, on CNN's Larry King Live, Stevens recounted that while on the set of Hawaiian Eye she was told she had a telephone call from Elvis Presley. "She didn't believe it, but in fact it was Elvis, who invited her to a party and said that he would come to her house and pick her up personally"; they subsequently dated.[10]

Stevens' first album was titled Concetta (1958). She had minor single hits with the standards "Blame It On My Youth" (music by Oscar Levant and lyrics by Edward Heyman), "Looking For A Boy" (music by George Gershwin and lyrics by Ira Gershwin), and "Spring Is Here" (music by Richard Rodgers and lyrics by Lorenz Hart).[citation needed]

She appeared opposite James Garner in a comedy episode of the TV Western series Maverick entitled "Two Tickets to Ten Strike," and after making several appearances on the Warner Bros. hit TV series 77 Sunset Strip, she recorded the hit novelty song "Kookie, Kookie (Lend Me Your Comb)" (1959), a duet with one of the stars of the program, Edd Byrnes,[1] that reached #4 on the Billboard Hot 100. She and Byrnes also appeared together on ABC's The Pat Boone Chevy Showroom.[citation needed]

Stevens' popularity on the small screen and as a recording star encouraged Warners to try her in films. She starred in three films for the studio, all opposite Troy Donahue: Parrish (1961), as a rural girl; Susan Slade (1962), playing the title role, an unwed mother; and Palm Springs Weekend (1963), a teen romantic comedy.[13] In 1962 Warners suspended her briefly for refusing to go on a publicity tour.[14] She performed in Wizard of Ozon stage in Kansas.[15]

When Hawaiian Eye ended Stevens guest-starred on Temple Houston and The Red Skelton Show. She played the lead in a horror film, Two on a Guillotine (1965), for Warners.

Stevens later starred as Wendy Conway in the television sitcom Wendy and Me (1964-1965) with George Burns, who also produced the show with Warners and played an older man who watched Wendy's exploits upstairs on the TV in his apartment.[1] She had a percentage of the show, and had three and a half years left on her contract with Warners. She said, "I've done the teenage epics... and want to move up into something like Virginia Woolf or Any Wednesday. I want to be a big star but do I have to throw tantrums and behave badly to get there? Can't I just be talented and work hard and be happily married?"[16]

Stevens had the juvenile lead in Never Too Late (1965), released by Warners. She signed a new contract with Warners to make one film a year for six years.

She made reprised her stage performance of Wizard of Oz at Carousel Theatre, California, then followed it with Any Wednesday, at Melodyland, Anaheim California. Stevens was reunited with Lewis in Way... Way Out (1966).[17][18]

Stevens starred in the Broadway production of Neil Simon's The Star-Spangled Girl with Anthony Perkins and Richard Benjamin in 1966.[19][20]

Tired of playing air-headed girls in her movies, Stevens got into nightclub work in Las Vegas in 1968. It was well received and she would regularly play Las Vegas.[21][22]

She turned down the Valerie Perrine role in Lenny because of its nudity.[22]

In the 1970s, Stevens started singing the Ace Is The Place theme song on Ace Hardware TV commercials in Southern California, and was a guest on The Dean Martin Celebrity Roast a few times.

In the spring of 1977, Stevens appeared in a first-season episode of The Muppet Show.

Stevens guest starred on Fantasy Island, The Love Boat, Hotel, Detective in the House, Murder, She Wrote and Tales from the Darkside.

She also was seen numerous times on the Bob Hope USO specials, including his Christmas Show from the Persian Gulf (1988).

In 1988 Stevens said "I still want to make movies with Marlon Brando. But first I've got to get hot. That's what I'm trying to do - get hot. I'm still waiting for the big role. I haven't peaked yet."[22]

I'm a big star all over the world except in Hollywood. I play (nightclubs in) Japan and Hong Kong every Christmas and New Year's... I don't have a hit TV show, I don't have a hit record, I don't have a hit movie, but I created something that people still love. I invented Cricket. There was barely a part written for me. Half the time, I said whatever I wanted. I was everybody's daughter. I was every boy's fantasy girlfriend. Girls wanted to be like me. That good feeling still exists. That's why I'm a big business, with 17 people working for me. I may not be the richest woman in the world, but I do okay. But Hollywood is a different story... There's something wrong when an actress can come off a 'Dynasty' or a 'Falcon Crest' and get a production deal (to star in a mini-series or TV movie) and I can't.[22]

Stevens had a regular role on the sitcom Starting from Scratch (1988). She said at the time, "TV is not my favorite medium; the work is hard, you don't have any life, and I feel like I've already been a champion in it, but the economics of the business is you need momentum to get hot. I'm using this to get me into movies."[22] The show only lasted one season.

In 1969, Stevens toured with the Bob Hope USO tour to Guam and Southeast Asia.[27]

In 1987, she, Barbara Eden and Lee Greenwood toured with Bob Hope on his USO tour to the Persian Gulf. Among her charitable works, she founded the Windfeather project to award scholarships to Native Americans,[1] and supports CancerGroup.com. In 1991 Stevens received the Lady of Humanities Award from Shriners Hospital and the Humanitarian of the Year Award by the Sons of Italy in Washington, D.C.[28]

In 1994, accompanied by her two daughters, she issued her first recording in several years, Tradition: A Family at Christmas,[1] In 1997, Stevens wrote, edited, and directed a documentary entitled A Healing, about Red Cross nurses who served during the Vietnam War.[18] The following year it won the title of Best Film at the Santa Clarita International Film Festival. She made nightclub appearances and headlined in major Las Vegas showrooms.[18]

Her feature-length directorial debut, Saving Grace B. Jones, was released in 2009.[2]

Stevens appeared in the 2014 film Just Before I Go, and has a featured role in 2016's Search Engines, co-starring daughter Joely Fisher.

Stevens was married twice during her twenties: her first husband was actor James Stacy from 1963 until their 1966 divorce, and her second husband was singer Eddie Fisher from 1967 until their 1969 divorce.[1] She is the mother of actresses Joely Fisher and Tricia Leigh Fisher.[29]

On September 23, 2005, Stevens was elected secretary-treasurer of the Screen Actors Guild, the union's second-highest elected position. She succeeded James Cromwell, who did not seek re-election.[33]

Stevens has contributed thousands of dollars over the years to the Republican Party, including donations to the Republican Congressional Committee and to both of Arizona Senator John McCain's runs for president (2000 and 2008).[34]

On June 29, 2013, the National Society of Daughters of the American Revolution's President General, Merry Ann Wright, presented Stevens with the Founder's Medal for Patriotism, for her 40+ years of work with the USO.[35]