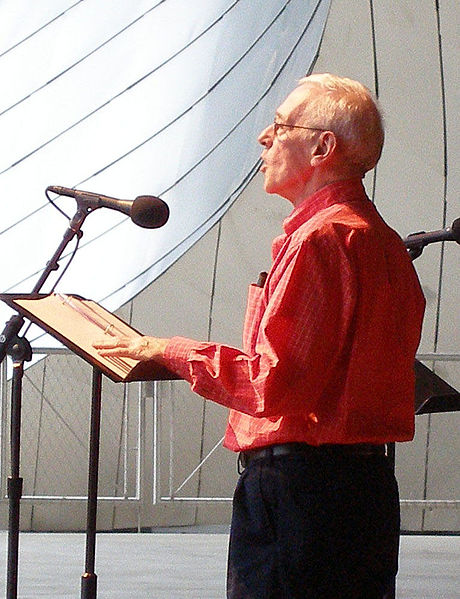 Born in Blackpool, England, Mahoney emigrated to the United States at the age of 18 and started his acting career on the stage in 1977, moving into film in 1980. He was best known for playing the blue-collar patriarch Martin Crane in the American sitcom Frasier, which aired on NBC from 1993 to 2004. In addition to his film and television work, Mahoney also worked as a voice actor and was particularly passionate about his stage work on Broadway and in Chicago theatre.

Mahoney was born in the Bispham area of Blackpool, England on June 20, 1940, the seventh of eight children. His paternal grandfather was Irish Catholic.[4][5]

The family had been evacuated to Blackpool from the Mahoneys' home city of Manchester, when it was heavily bombed during the Second World War. He started school at St Joseph's College, Blackpool. After the war, the family moved back to Manchester. Mahoney grew up in the Withington area of the city and discovered acting at the Stretford Children's Theatre. His father Reg was a baker[6] who played classical piano, and his mother Margaret (née Watson) was a housewife who loved reading. His parents' marriage was not happy and they either would not speak to each other or have heated arguments. The family situation, combined with the war, fueled Mahoney's interest in acting and he vowed to leave Manchester.[7][8]

Mahoney moved to the United States aged 18 in March 1959[9] when his older sister Vera, a war bride living in rural Illinois, agreed to sponsor him. He studied at Quincy University, Illinois, before joining the United States Army. After graduating from Quincy, he lived in Macomb, Illinois, earned his Master's degree in English [10]and taught English at Western Illinois University in the early 1970s,[11] before settling in Forest Park, Illinois, and later in Oak Park, Illinois. He became a US citizen in 1971[12] and served as editor of a medical journal through much of the 1970s.[11]

Dissatisfied with his career, Mahoney took acting classes at St. Nicholas Theatre, which inspired him to resign from his day job and pursue acting full-time. After a stage production in Chicago in 1977, John Malkovich encouraged him to join the Steppenwolf Theatre.[13][14] He did so and went on to win the Clarence Derwent Award as Most Promising Male Newcomer. Gary Sinise said in an interview for Bomb Magazine that Lyle Kessler's play Orphans "kicked John Mahoney, Kevin Anderson and Terry Kinney off into the movie business"[15] after their Steppenwolf performance of the play for which he won the Derwent Award and the Theatre World Award.[16] Mahoney won Broadway's Tony Award for Best Featured Actor in a Play for his performance in John Guare's The House of Blue Leaves.[17]

Mahoney's first major film role was in the 1987 Barry Levinson film Tin Men. He went on to have prominent roles in a number of acclaimed films throughout the late 1980s and 1990s, including Moonstruck, Eight Men Out, Say Anything..., In the Line of Fire, Reality Bites, and The American President.[17][18][11] He appeared in two Coen brothers films, Barton Fink[19] and The Hudsucker Proxy.[20]

Mahoney appeared in Frasier from its debut in 1993 until the final episode in 2004; Mahoney received two Emmy nominations and two Golden Globe nominations for the role of Martin Crane, the father of Frasier Crane and Niles Crane. NBC executives held Mahoney in such high esteem that Warren Littlefield declared he was pre-approved when the Frasier creative team suggested casting him as the father.[21] Prior to appearing on the series, Mahoney had appeared in an episode of Cheers - from which Frasier was a spin-off - as an inept jingle writer who has a brief conversation with Frasier. Mahoney also appeared as a priest in Becker, which starred Cheers star Ted Danson.

Mahoney's first voice job was in W. B. Yeats's "The Words upon the Window-Pane" for the award-winning National Radio Theater of Chicago. He provided the voices for several characters in Antz (1998), Preston Whitmore in Atlantis: The Lost Empire and Atlantis: Milo's Return, General Rogard in The Iron Giant (1999), and Papi in Kronk's New Groove (but was succeeded by Jeff Bennett in The Emperor's New School for an unknown reason). In 2007, Mahoney provided the voice of Dr. Robert Terwilliger, Sr. (Sideshow Bob's father) in The Simpsons episode "Funeral for a Fiend." This reunited him with his Frasier co-stars Kelsey Grammer (Sideshow Bob) and David Hyde Pierce (Cecil, Sideshow Bob's brother).

Mahoney co-starred as the Old Man in the Broadway revival of Prelude to a Kiss at the American Airlines Theater in a limited-run engagement running from previews on February 17, 2007, through to April 29, 2007.[22][23] He appeared as an elderly drag queen in the ER season 13 episode "Somebody to Love," and co-starred with Steve Carell (himself a veteran of Chicago theatre) as the father of Carell's character in Dan in Real Life. In March 2008, he opened in the world premiere of Better Late at the Northlight Theatre.[24] He was also the narrator for Midwest Airlines commercials. Mahoney also made two appearances on USA's Burn Notice in the second (2009) and third (2010) season finales. His character, referred to only as "Management," is a senior intelligence agency official who is the apparent main mover of the conspiracy which blacklisted Michael Westen.[25][26]

Mahoney joined the cast of In Treatment for the series' second season (2009) as a frenetic CEO who is overwhelmed by his personal and professional responsibilities and experiences chronic physical anxiety attacks. In 2010, he made a guest appearance on $#@! My Dad Says as homophobic retired naval officer Lt. Commander Wally Durham. Despite the numerous successes throughout his career, Mahoney has maintained that his early work in Lyle Kessler's play Orphans has "affected people more than any other play I've ever done. I still get mail from it, I still get people stopping me on the street, and it's 20 years later."[27]

Beginning in April 2011, Mahoney began rehearsing The Outgoing Tide, a new play by Bruce Graham at Northlight Theatre in Skokie, Illinois (suburban Chicago). The play also stars fellow Chicago actors Rondi Reed and Thom Cox. In 2011, he had two guest appearances on Hot in Cleveland as Roy, a waiter and a love interest for Betty White's character Elka.[28] This reunited him with his Frasier co-star Jane Leeves, as well as Wendie Malick whose character he eventually married in Frasier and his co-star in the movie The American President. Mahoney was a featured ensemble cast member in The Birthday Party, playing in Chicago's Steppenwolf Theatre from January 24 to April 28, 2013.[29] Mahoney portrayed his last role in the play The Rembrandt, from September to November 2017.[30]

Along with David Hyde Pierce, Mahoney was godfather to Frasier co-star Jane Leeves' son Finn.[31] Mahoney rarely spoke publicly about his private life,[7] but in a 2002 article he revealed he had been in several relationships, although he had never married, citing his parents' unhappy marriage as something he feared he would repeat.[8] He suffered from colon cancer in the mid-1980s and felt unable to have sex following a colostomy.[32] His Catholic faith was at the center of his life and work.[33][34]

Mahoney died in a Chicago hospice on February 4, 2018, of complications from throat cancer, originally diagnosed in 2014. He was 77 years old. According to his friend Anna Shapiro: "He was fragile and he was supposed to be having a routine procedure. But having just beat Stage 3 throat cancer, I think he was just too weak… By the time he did The Rembrandt he was clean of cancer... But other health issues came up and he was just too fragile."[35][36][37][38][39]

Report a problem
Biography of John Mahoney at FanPal • 2022