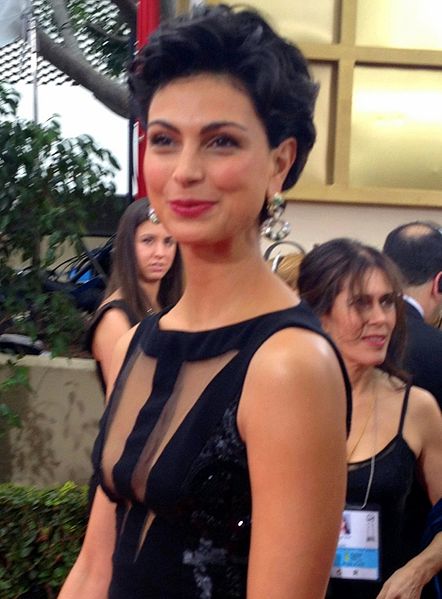 Morena Baccarin (/məˈreɪnə ˈbækərɪn/;[1] ; born June 2, 1979)[2] is a Brazilian-American actress. She is known for portraying Inara Serra in the series Firefly and the follow-up film Serenity, Adria in the series Stargate SG-1 and the follow-up film Stargate: The Ark of Truth, Anna in the 2009 version of the series V, Vanessa in the superhero comedy film Deadpool and its sequel Deadpool 2, and Jessica Brody in the Showtime series Homeland, for which she received a Primetime Emmy Award nomination for Outstanding Supporting Actress in a Drama Series in 2013. She currently portrays Dr. Leslie Thompkins in the Fox series Gotham.

Baccarin was born in Rio de Janeiro, the daughter of Vera Setta, an actress, and Fernando Baccarin, a journalist.[3][4] She is of Italian descent.[5] Her name, "Morena", means "brunette" in several languages, including Spanish and Portuguese.[6] When she was ten, she moved with her family to Greenwich Village, New York, as her father was transferred to work as an editor at Globo TV's headquarters.[7] Baccarin attended Public School 41 and New York City Lab School for Collaborative Studies, where she and her future Homeland co-star Claire Danes were classmates.[8][9] She later attended the Fiorello H. LaGuardia High School of Music & Art and Performing Arts before she entered the theater program at the Juilliard School, where she was in the Drama Division's Group 29 (1996-2000).[10]
Read more...

Baccarin landed her first film role in the improvised fashion-world comedy Perfume (2001). This was followed by a lead role in Way Off Broadway (2001).[11]

She served as Natalie Portman's understudy in the Central Park production of The Seagull.[3] The science-fiction drama Firefly (2002) as Inara Serra was Baccarin's first television series,[12] and she reprised her role in the 2005 film Serenity.

In February 2005, Baccarin provided the voice for Black Canary in multiple episodes of the animated series Justice League Unlimited. She also guest starred in three episodes of the television series The O.C. in 2006. Baccarin also appeared in the unaired pilot episode of It's Always Sunny in Philadelphia, playing a transgender woman Carmen.[3] It was announced in April 2006 that Baccarin would be playing the adult version of recurring villain Adria in the tenth season of Stargate SG-1. She first appeared in season 10 episode "Counterstrike" as adult Adria (the younger versions of Adria were previously played by other actresses). Baccarin reprised her role in the movie Stargate: The Ark of Truth.

In May 2009, Baccarin made her Off-Broadway debut in Theresa Rebeck's television satire Our House at Playwrights Horizons in New York City.[13] She landed the lead role of Anna, the leader of the alien Visitors, in ABC's 2009-2011 series V,[14] a remake of the 1984 series.[15] In May 2011, shortly following the airing of the show's second-season finale, it was announced that the show would not return for a third season. That same month, Baccarin joined the cast of the Showtime television drama Homeland,[16] for which she received praise for her role as the conflicted wife of a former prisoner of war.[17] On July 18, 2013, she was nominated for Outstanding Supporting Actress in a Drama Series at the 2013 Primetime Emmy awards for her performance.

In 2015, Baccarin began a leading role as Dr. Leslie Thompkins in the hit Fox show Gotham.

In September 2015, Baccarin said that after her divorce was finalized, she planned to marry her Gotham co-star, Ben McKenzie, adding that she was pregnant with their child. Morena and McKenzie also both had roles on The O.C. [24] The couple have a daughter, born in March 2016.[25] Baccarin and McKenzie announced their engagement in November 2016.[26] They were married in Brooklyn, New York, on June 2, 2017.[2][27]