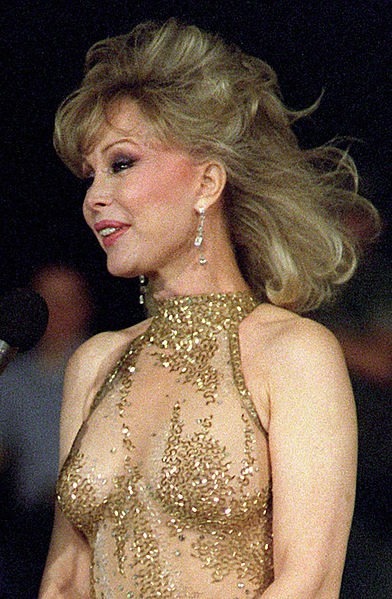 Barbara Eden (born Barbara Jean Morehead, August 23, 1931)[1] is an American film, stage, and television actress, and singer, best known for her starring role of "Jeannie" in the sitcom I Dream of Jeannie.

Eden was born in 1931 in Tucson, Arizona, to Alice Mary (née-Franklin; 1915-1986) and Hubert Morehead (1911-1974).[2] For decades, her year of birth was thought to be 1934,[3][4] an age fabrication of three years. After her parents' divorce, she and her mother moved to San Francisco, where her mother married Harrison Connor Huffman, a telephone lineman, by whom she had a daughter, Eden's half-sister. The Great Depression deeply impacted the family, and as they were unable to afford many luxuries, Alice entertained her children with singing.

Eden's first public performance was singing in the church choir, where she sang the solos. As a teenager, she sang in local bands for $10 (approx. equiv. $130 in 2017) a night in night clubs. At age 16, she became a member of Actor's Equity, and studied singing at the San Francisco Conservatory of Music and acting with the Elizabeth Holloway School of Theatre. She graduated from Abraham Lincoln High School in San Francisco in the Spring Class of 1949[5] and studied theater for one year at City College of San Francisco. As Barbara Huffman, she was elected Miss San Francisco in 1951 and she also entered the Miss California pageant.[6][7]

Eden began her TV career as a semi-regular on The Johnny Carson Show in 1956.[8][9] She also made featured appearances on shows such as The West Point Story, Highway Patrol, Private Secretary, I Love Lucy, The Millionaire, Target: The Corruptors!, Crossroads, Perry Mason, Gunsmoke, December Bride, Bachelor Father, Father Knows Best, Adventures in Paradise, The Andy Griffith Show, Cain's Hundred, Saints and Sinners, The Virginian, Slattery's People, The Rogues, and the series finale of Route 66. She guest-starred in four episodes of Burke's Law, playing different roles each time. She was an uncredited extra in the movie The Tarnished Angels with Rock Hudson, in partnership with 20th Century Fox studios. She then starred in the syndicated comedy TV series How to Marry a Millionaire. The series is based on the 1953 film of the same name.

Discovery in the Hollywood sense came when she starred in a play with James Drury. Film director Mark Robson, who later directed her in the movie From the Terrace, had come to the play and wanted her for 20th Century Fox studios. Her screen test was the Joanne Woodward role in No Down Payment (1957). Though she did not get the role, the studio gave her a contract. She did a screen test for the role of Betty Anderson in the 1957 film version of Peyton Place, but Terry Moore got the role. She had minor roles in Bailout at 43,000, Will Success Spoil Rock Hunter?, and The Wayward Girl, and then became a leading lady in films and starred opposite Gary Crosby, Barry Coe, and Sal Mineo in A Private's Affair. She had a co-starring role in Flaming Star (1960), with Elvis Presley.

The following year, she played in a supporting role as Lt. Cathy Connors in Irwin Allen's Voyage to the Bottom of the Sea. She starred in The Wonderful World of the Brothers Grimm, a George Pal-directed Cinerama film for MGM, and another Irwin Allen production for 20th Century Fox, Five Weeks in a Balloon (1962). She was the female lead in the 1962 Fox comedy Swingin' Along, starring Tommy Noonan and Peter Marshall, in their final joint screen appearance. She did a screen test with Andy Williams for the 20th Century Fox movie State Fair, but did not get the role.[10]

Her last film for 20th Century Fox was The Yellow Canary (1963). She left Fox and began guest-starring in television shows and acting in films for MGM, Universal, and Columbia. She played supporting roles over the next few years, including The Brass Bottle and 7 Faces of Dr. Lao.

I Dream of Jeannie

Bewitched was the number two show on television in 1964, and following on its heels, in 1965, producer Sidney Sheldon signed Eden to star in his up-and-coming fantasy sitcom I Dream of Jeannie that would air on NBC. After various brunette starlets and beauty queens unsuccessfully tried out for the role, Eden was approached by Sheldon who had seen her in The Brass Bottle and had been recommended by various colleagues. Eden played Jeannie, a beautiful genie set free from her bottle by astronaut and United States Air Force captain (later major) Anthony "Tony" Nelson, played by Larry Hagman.

After Jeannie, Eden did an unaired pilot, The Barbara Eden Show,[8] as well as another pilot, The Toy Game. Her first TV movie was called The Feminist and the Fuzz. Although she is best known for comedy, most of these films were dramas, as when she starred opposite her "Jeannie" co-star Larry Hagman in A Howling in the Woods (1971).

In The Stranger Within (1974), Eden played housewife Ann Collins, a woman impregnated by extraterrestrials. Later, Eden played Liz Stonestreet, a former policewoman now private detective investigating the disappearance of a missing heiress, in a critically acclaimed TV movie Stonestreet: Who Killed the Centerfold Model? (1977). She starred in and co-produced, with her own production company (MI-Bar Productions), the NBC TV movie romantic comedy The Secret Life of Kathy McCormick (1988). She also starred in and produced the romantic comedy TV movie Opposites Attract (1990), co-starring John Forsythe.

In 1978, she starred in the feature film Harper Valley PTA, based on the popular country song. This led to a namesake television series in 1981. In both the movie and the TV series, Eden played the show's heroine, Stella Johnson. The show won 11 of its 13 time slots during its first season. It was a comedy version of Peyton Place, with Anne Francine playing wealthy villain Flora Simpson Reilly.[citation needed] In one episode, Stella dressed in a blue and gold genie costume and in another she played both Stella and her cousin Della Smith (similar to Jeannie's evil twin-sister character). The TV series Harper Valley PTA began January 16, 1981, and was renamed simply Harper Valley when the show began its second season on October 29, 1981. During this time, Eden also became the spokeswoman for L'eggs pantyhose and appeared in a series of print ads and TV commercials for the brand from 1979 to 1983.[14]

Eden in 1987 (age 56) at a United Services Organization show aboard the amphibious assault ship USS Okinawa.

From April 3 through September 16, 1984, Eden starred in the Lee Guber and Shelly Gross national production of the John Kander and Fred Ebb Tony Award-winning musical comedy Woman of the Year, playing the role of Tess Harding Craig, alongside Don Chastain (as Sam Craig), and Marilyn Cooper. In 1990, Eden had a recurring role of a billionairess seeking revenge against J.R. Ewing in five episodes of the final season of Dallas, playing the captivating character LeeAnn De La Vega, reuniting her with her I Dream of Jeannie co-star Hagman. In her final episode, the character admits that her maiden name was "LeeAnn Nelson", which was a production gag, as "Nelson" was the surname of Hagman's character and Eden's character's married name in I Dream of Jeannie. In 1991, she starred in the stage play Same Time, Next Year with Wayne Rogers, and reprised her role of Jeannie in a television movie of the week. In 1993, she starred in an 11-city national tour of the play Last of the Red Hot Lovers with Don Knotts.

Eden starred in such musical comedies as Nite Club Confidential (playing the role of Kay Goodman, in 1996), The Sound of Music, Annie Get Your Gun, South Pacific with Robert Goulet, The Pajama Game with John Raitt, and Gentlemen Prefer Blondes playing Lorelei Lee. She has been a musical guest star in many variety television shows, including 21 Bob Hope specials, The Carol Burnett Show, The Jonathan Winters Show, The Jerry Lewis Show, This Is Tom Jones, Tony Orlando and Dawn and Donny & Marie. She released an album entitled Miss Barbara Eden in 1967 for the record label Dot Records.

From 2000 to 2004, Eden starred in the national touring production of the play The Odd Couple: The Female Version playing the role of Florence Unger opposite Rita MacKenzie as Olive Madison. In March 2006, Eden reunited with her former co-star Larry Hagman for a publicity tour in New York City to promote the first-season DVD of I Dream of Jeannie. They appeared together on Good Morning America, The View, Access Hollywood, Entertainment Tonight, Martha, and Showbiz Tonight, among other shows. In March 2006, Hagman and Eden again reunited, this time onstage, in New York, for Love Letters at the College of Staten Island, and at the United States Military Academy in West Point, New York. This was Eden's first visit to the United States Military Academy since appearing in The West Point Story[citation needed]

Eden starred in the play Love Letters with Hal Linden in 2006, and a guest-starring role on the Lifetime series Army Wives, written and produced by her niece, Katherine Fugate. In December 2008, she began filming the TV movie Always and Forever for the Hallmark Channel, shown in October 2009.

In May 2013, Eden appeared with former US President Bill Clinton, Elton John, and Fergie at the opening ceremony of the 21st Life Ball in Vienna, where Eden wore her famous Jeannie harem costume.[15] In late 2013, Eden was cast in the movie One Song, which was filmed in Excelsior, Minnesota.[16]

Eden has also done voice work for the animated children's television series Shimmer and Shine where she voices the genie teacher Empress Caliana, who is retired genie mentor of Princess Samira who mentors the title characters. Caliana aids the main protagonists Leah and her twin genies Shimmer and Shine in rescuing Samira from a crystal cave in "The Crystal Queen". She also voices Caliana in the Season 3 episode "Samira and Zeta" which reveals that Caliana taught at Genie Hall, a genie school attended by both a young Samira and the series main antagonist Zeta back when both were genies-in-training.

Personal life: Jeannie Out of the Bottle

Eden wrote a memoir, Jeannie Out of the Bottle, which was released on April 5, 2011, by Crown Archetype, a division of Random House.[17]

Chronicling Eden's personal life and Hollywood career of more than 50 years, the book debuted at #14 on the New York Times Best Seller List.[18][19]

Jeannie Out of the Bottle includes intimate details about Eden's early childhood, her rise to popularity in her teens and early 20s, her co-stars over the years, and Eden's work leading up to and during I Dream of Jeannie. Also covered are her three marriages to Michael Ansara (1958-1974), Charles Fegert (1977-1982) and Jon Eicholtz (1991-present) and her "emotional breakdown" following the death of her only child, Matthew Ansara.

On November 17, 1988, Eden received a star on the Hollywood Walk of Fame for her contributions to television.[20] In 1990, the University of West Los Angeles School of Law granted Eden an honorary Doctor of Laws degree.[20]