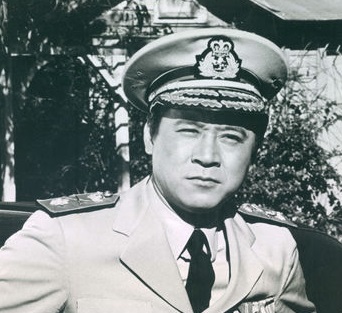 In his early career, Shigeta often played romantic male lead roles, which were almost nonexistent for an actor of Asian descent during his time. His most successful romantic lead roles were in the films The Crimson Kimono and Bridge to the Sun.

Before his Hollywood career he found success as a singer and performer abroad, especially in Japan and Australia.

Born in the Territory of Hawaii of Japanese ancestry in 1929,[2] Shigeta was a 1947 graduate of President Theodore Roosevelt High School, and studied drama at New York University. After completing ROTC, he enlisted in the Hawaii National Guard 298th infantry prior to his 1951 enlistment in the United States Marine Corps during the Korean War. He served for two-and-a-half years, and rose to the rank of Staff Sergeant.[3][4][5][6]

Shigeta entered and won first prize on Ted Mack's television talent show, The Original Amateur Hour.[7] Embarking on a singing career in Los Angeles, he teamed with Hawaiian operatic tenor Charles K.L. Davis. Their agent at the time gave them the non-ethnic sounding stage names of "Guy Brion" for Shigeta, and " Charles Durand" for Davis.[8] They developed a supper club musical career in the United States, singing at venues such as the Mocambo and the Los Angeles Players Club.[9][10] Despite that success, breaking into the movies eluded him.

During the Korean War Shigeta enlisted in the United States Marine Corps, where he entertained troops in California.[11] En route to Korea, the ceasefire led Shigeta to Japan, where he was discharged from the Marines and hired by the theatrical division of Toho Studios.[12]

Shigeta did not speak the Japanese language until Toho Studios in Tokyo invited him to be a musical star under his real name in Japan.[13] He spent years in that country, becoming a success in all media aspects — radio, television, stage, supper clubs, movies, recordings — being known as "The Frank Sinatra of Japan".[14]

In 1958 the Nichigeki Theatre in Tokyo exported their extravaganza Cherry Blossom Show to Australia with Shigeta as the male lead. The show was performed at the Empire Theatre in Sydney, Her Majesty's Theatre in Brisbane, the Theatre Royal in Adelaide, and Her Majesty's Theatre in Melbourne.[15] The show was a big success, with one Australian reviewer writing about Shigeta, "... has matinee idol good looks and a soothing baritone voice that should send the record companies mad for his autograph on recording contracts."[16]

Shigeta returned to the United States to sing on The Dinah Shore Show. By 1959 he was the star of the Shirley MacLaine-Steve Parker production of Holiday in Japan at the New Frontier Hotel and Casino in Las Vegas.[10][14][17][18]

In 1969 Shigeta toured the United States in the lead role of The King and I, with Melva Niles and Pam Cavan co-starring in the production.[19]

When movies began to open up for him, Shigeta took acting lessons from seasoned dialogue coach Leon Charles.[4]

Shigeta first came on screen in the U.S., in 1959 as Detective Joe Kojaku in The Crimson Kimono, a detective story that featured an interracial romantic triangle between Kojaku, his partner Sgt. Charlie Bancroft (played by Glenn Corbett), and Christine Downes (portrayed by Victoria Shaw). Shigeta's character was somewhat groundbreaking for the 1950s, an Asian detective played by an Asian actor with regular speech patterns, rather than a non-Asian made up to pass as Asian who speaks in broken English.[20]

Paramount Pictures and James Clavell cast Shigeta in the 1960 release Walk Like A Dragon, as Cheng Lu, a young Chinese man in the American old west who resents that Chinese must be subservient to white people.[17] When filming began, Shigeta was still starring in Holiday in Japan in Las Vegas.[14] An arrangement was made to transport him after his last show to the Paramount studio by ambulance to make sure he arrived on time.[4] The technical advisor to Shigeta on the film was Benson Fong, who taught Shigeta how to mount a horse Chinese style.[14] Jack Lord has first billing in this movie, which pits Shigeta against Lord for the affections of Kim Sung, played by Nobu McCarthy.[21] Shigeta and McCarthy would work together again in the 1965 Perry Mason episode, "The Case of the Wrongful Writ," while Shigeta and Lord would work together in the 1968 Hawaii Five-O episode Deathwatch.

The 1961 romantic comedy Cry for Happy had Shigeta co-starring with Glenn Ford, Donald O'Connor and Miyoshi Umeki in a tale about Korean War era United States Navy photographers in Japan.[22]

In 1961, Shigeta was cast as Wang Ta, a role originated by Ed Kenney on Broadway,[23] in the Academy Award-nominated[24] movie version of Rodgers and Hammerstein's Flower Drum Song with Nancy Kwan and Miyoshi Umeki playing the love interests.[25]

He was cast as World War II Japanese diplomat Hidenari Terasaki opposite Carroll Baker as Gwen Terasaki in the 1961 biographical movie Bridge to the Sun.[26] A rarity for its era, the movie told the true story of a racially mixed marriage set against the background of the war between the United States and Japan.[27]

Shigeta guest starred in many television shows, beginning with Alcoa Premiere in 1961, as a Korean War era Chinese Communist who tortured star Lloyd Bridges.[28] He continued to act in television up through Avatar: The Last Airbender in 2005.

In 1965, Shigeta starred in Paradise, Hawaiian Style with Elvis Presley.

From 1969 to 1972, Shigeta had recurring appearances on the TV hospital drama Medical Center, in which he alternately appeared as the Resident Doctor and Doctor Osaka, for seven episodes. He played the role of Chief Resident in the series 1969 2-hour pilot U.M.C.[30][31]

Tomorrow's Child from 1982, with Shigeta as a medical assistant to doctor Ed Flanders, dealt with the subject matter of a baby being brought to full term in a test tube.[32]

In 2005, Shigeta received a "Visionary Award" from the Asian-American theatre organization, East West Players, at their annual anniversary gala in Los Angeles.[36]

In 2006, Shigeta was among the actors, producers and directors interviewed in the documentary The Slanted Screen, directed by Jeff Adachi, about the representation of Asian and Asian American men in Hollywood.[37]

Report a problem
Biography of James Shigeta at FanPal • 2022