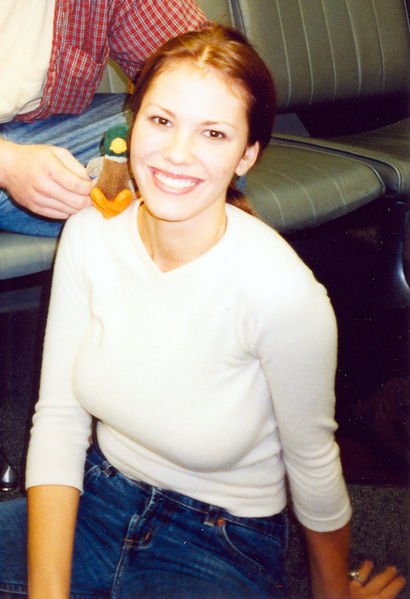 Nicole Avery Cox (born June 2, 1978)[2] is an American actress and comedy writer[1] known mostly for her roles on the television series Unhappily Ever After, Las Vegas, and Nikki.

Nikki Cox was born in Los Angeles, California. Cox's father is Meredith Avery Cox and her mother is Terry Kay Cox, who was her personal manager.[2] She was a producer on the Jay Mohr Sports radio show hosted by her husband, Jay Mohr, and used to also help produce his podcast Mohr Stories.
Read more...

Cox began her career at the age of four, when she appeared as a dancer in several ballet productions and TV specials. She began acting at the age of 10, making appearances in several movies and guest-starring on shows such as Baywatch, Star Trek: The Next Generation, Mama's Family, Eerie, Indiana, and Blossom. She also starred in General Hospital from 1993 to 1995, and had a recurring role on the Saturday morning program California Dreams.

Her appearances on various TV shows led to her first prime-time role as Tiffany Malloy on the sitcom Unhappily Ever After, which ran on the WB 1995-1999. Her brother Matthew guest-starred on a handful of episodes, including one where he wore a "Ghostface" mask (the type of mask featured in Scream).

When Unhappily Ever After was cancelled after taping 100 episodes, Cox went on to portray former prostitute Taylor Clayton on the sitcom The Norm Show and star as Nikki White in Nikki, a sitcom vehicle that lasted less than two seasons (2000-2002). She played Mary Connell on the TV drama Las Vegas from 2003-2007. On May 20 and May 23, 2005, her Las Vegas character crossed over to NBC's soap opera Passions to coincide with the arrival of two new characters introduced on Las Vegas.

In 2006, she became the spokesmodel for the online gaming website, Sportsbook.com. In 2009, she provided the voice of Jenna in Leisure Suit Larry: Box Office Bust. That same year, she also appeared in Lonely Street, a comedy starring Robert Patrick, Jay Mohr, Ernie Hudson, and Lindsay Price. In 2016, Cox was nominated as the sole writer for Mohr's album Happy. And A Lot for the Grammy Award for Best Comedy Album at the 58th Annual Grammy Awards.[3]

Cox dated co-star Kevin Connolly for several years. In 1997, she was engaged to Bobcat Goldthwait, 16 years her senior, who voiced the character of Mr. Floppy in the television series Unhappily Ever After in which Cox also starred.[4][5]

On December 29, 2006, she married comedian/actor Jay Mohr in Los Angeles.[6] The two met on the set of Las Vegas.[7] In December 2008, Mohr petitioned a Los Angeles court to allow him to legally add her last name to his, changing his name to Jon Ferguson Cox Mohr.[8] Cox and Mohr's son, Meredith, was born in 2011. On the May 16, 2017 episode of The Adam Carolla Show, Mohr confirmed that he and Cox are "in the middle" of a divorce.[9]