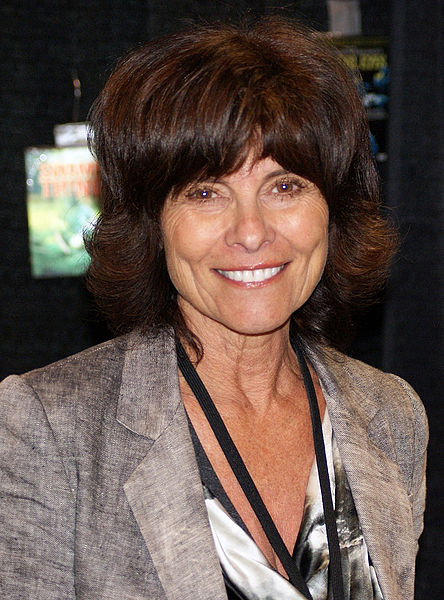 Adrienne Jo Barbeau (born June 11, 1945) is an American actress, singer and the author of three books. Barbeau came to prominence in the 1970s as Broadway's original Rizzo in the musical Grease, and as Carol Traynor, the divorced daughter of Maude Findlay (played by Beatrice Arthur) on the sitcom Maude (1972-1978). In 1980 began appearing in horror and science fiction films, including The Fog (1980), Creepshow (1982), Swamp Thing (1982) and Escape from New York (1981). Other films included: Back to School (1986) and Argo (2012). During the 1990s, she became known for providing the voice of Catwoman on Batman: The Animated Series (1992-1995), and subsequent Batman cartoon series. In the 2000s, she appeared on the HBO series Carnivàle as Ruthie the snake dancer.

Barbeau was born in Sacramento, California,[1] in 1945,[2] the daughter of Armene (née Nalbandian) and Joseph Barbeau, who was a public relations executive for Mobil Oil.[3] Her mother was of Armenian descent and her father's ancestry included French-Canadian, Irish, and German.[4] She has a sister, Jocelyn, and a half brother on her father's side, Robert Barbeau, who still resides in the Sacramento area.[5] She attended Del Mar High School in San Jose, California. In her autobiography, Barbeau says that she first caught the show business bug while entertaining troops at army bases throughout Southeast Asia, touring with the San Jose Civic Light Opera.
Read more...

In the late 1960s, Barbeau moved to New York City and worked "for the mob"[6] as a go-go dancer. She made her Broadway debut in the chorus of Fiddler on the Roof, and later took the role of Hodel, Tevye's daughter; Bette Midler played her character's sister. She left Fiddler in 1971 to play the leading role of Cookie Kovac in the off-Broadway nudie musical Stag Movie. Barbeau, as Cookie Kovac, and Brad Sullivan, as Rip Cord, were "quite jolly and deserve to be congratulated on the lack of embarrassment they show when, on occasion, they have to wander around stark naked. They may not be sexy but they certainly keep cheerful," wrote The New York Times theater critic Clive Barnes in an otherwise negative review.[7] Barbeau went on to star in more than 25 musicals and plays, including Women Behind Bars, The Best Little Whorehouse in Texas, and Grease. She received a Theater World Award and a 1972 Tony Award nomination for her portrayal of tough-girl Rizzo in Grease.

During the 1970s, Barbeau starred as Carol Traynor, the daughter of Bea Arthur's title character on the comedy series Maude, which ran from 1972 to 1978 (actress Marcia Rodd had originated the role of Carol in a 1972 episode of All in the Family, also titled "Maude", alongside Arthur). In her autobiography, There Are Worse Things I Could Do, Barbeau remarked: "What I didn't know is that when I said I was usually walking down a flight of stairs and no one was even listening to me. They were just watching my breasts precede me." During the last season of Maude, Barbeau did not appear in the majority of the episodes. In a 2009 Entertainment Tonight TV interview, Barbeau mentioned that she had good on- and off-camera chemistry with Arthur; she said that the two stayed close until Arthur's death on April 25, 2009.[citation needed] Barbeau and Arthur reunited on camera during a 2007 taping of The View, reminiscing about their long-running friendship and their years as co-stars on Maude.[episode needed] Then, just 9 years after her TV mother's death, Barbeau said in a 2018 interview with Brainwaves about her on- and off-screen chemistry with her TV mother was: "I was doing an interview for this 1-woman show that I am doing and the interviewer asked that... she asked 'What do people usually ask you,' and I said, 'They always want to know ... What It Was Like Working with Bea?' She was fantastic and you know, I realized years later, how much I took it for granted, because it was my first experience on television... I just assumed that everyone was as giving as she was, as professional a she was that everyone who was doing a TV show, showed up, knowing their lines and showed up on time and was willing to say to the writers: 'I think this line was funnier if Adie had said it, or Conrad had said it or Bill had said it,' I mean, she was just the best, she was the best, very funny, she was not 'Maude,' when she wasn't saying those lines. I don't know if I say she was quiet, she was a homebody. She had her sons, her dog and her cooking and she wasn't into the celebrity scene and she was a great lady. I loved her dearly, and we had a great cast and they were my family for 6 years that I loved each of them and all of them and it was the best experience anyone could've had, being introduced to television, like that!"[8]

Barbeau was cast in numerous television films and series such as The Love Boat, Fantasy Island, Valentine Magic on Love Island and Battle of the Network Stars. In her autobiography, she claimed: "I actually thought CBS asked me to be on Battle of the Network Stars because they thought I was athletic. My husband clued me in: who cared if I won the race, as long as I bounced when I ran?"[9]

The popularity of Barbeau's 1978 cheesecake poster confirmed her status as a sex symbol. Barbeau's popularity stemmed partly from what critic Joe Bob Briggs referred to as the "two enormous talents on that woman",[10] and her typecasting as a "tough broad". Despite her initial success, she said at the time that she thought of Hollywood as a "flesh market", and that she would rather appear in films that "explore the human condition" and "deal with issues".[11]

Barbeau's then-husband, director John Carpenter, cast her in his horror film, The Fog (1980), which was her first theatrical film appearance. The film was released on February 1, 1980, and was a theatrical success, grossing over $21 million in the United States alone,[12] and establishing Barbeau as a genre film star. She subsequently appeared in a number of early-1980s horror and science fiction films, a number of which have now become cult film classics, including Escape from New York (also from Carpenter), Creepshow and Swamp Thing. Of her screen work with Carpenter, Barbeau has stated: "John is a great director. He knows what he wants and he knows how to get it. It's simple and it's easy ."[13]

She also appeared in the high-grossing Burt Reynolds comedy The Cannonball Run (1981), and as the shrewish wife of Rodney Dangerfield's character in Back to School (1986). Barbeau also starred, alongside future talk show host Bill Maher and actress and model Shannon Tweed, in the comedy Cannibal Women in the Avocado Jungle of Death (1989).

In the 1990s, Barbeau mostly appeared in made-for-television films such as Scott Turow's The Burden of Proof (1992), as well as playing Oswald's mother on The Drew Carey Show and gaining new fame among animation fans as Catwoman on Batman: The Animated Series and Gotham Girls. She was also in the ABC show Revenge as Victoria's mother.

She also worked as a television talk show host and a weekly book reviewer for KABC talk radio in Los Angeles. In 1999, she guest starred in the Star Trek: Deep Space Nine episode "Inter Arma Enim Silent Leges" as Romulan Senator Kimara Cretak. In 1994, she also appeared in the Babylon 5 episode "Spider in the Web" as Amanda Carter.

In 1998, Barbeau released her debut album as a folk singer, the self-titled Adrienne Barbeau. She starred in the cartoon series Totally Spies! doing the voice of villainess Helga Von Guggen in seasons 1, 2 and 4.

From 2003 to 2005, she starred on the HBO series Carnivàle. From March to May 2006, she starred as Judy Garland in the off-Broadway play The Property Known as Garland.[14]

Barbeau played a cameo role in Rob Zombie's Halloween, a "reimagining" of the 1978 film of the same name, written and directed by her first husband, John Carpenter. Her scene was cut from the theatrical version of the film but is included in the DVD version.

In 2009, Barbeau was cast as "The Cat Lady" in the family comedy The Dog Who Saved Christmas, as Scooter's Mom in the 3D animated feature Fly Me to the Moon and as a hospice patient in the love-story, Reach for Me .[citation needed]

Also in 2009, Barbeau had guest spots in the first episode of Showtime's hit series Dexter (Season 4), as well as on Grey's Anatomy.

She voiced the Greek goddess Hera in the video game God of War III released for the PlayStation 3 in March 2010. In August 2010, she began a role on the long-running ABC daytime drama General Hospital. In 2012, she voiced UNSC scientist Dr. Tilson in the highly anticipated game Halo 4, released on the Xbox 360 in November 2012. She voiced characters in the Mad Max video game of the same name.[15]

She reprised her role as Catwoman in an animated remake of the third trailer for The Dark Knight Rises. This trailer was made to both celebrate the upcoming movie as well as to promote Hub's ten episode marathon of Batman: The Animated Series.

On October 22, 2013, she made a guest appearance on the FX series Sons of Anarchy.

In 2015, she assumed the role of Berthe in Pippin with the Broadway Touring Company of the renowned musical. In the same year she also began to provide the Descriptive Video Service track for visually-impaired individuals for some episodes of the Fox series Empire.

Barbeau was married to director John Carpenter from January 1, 1979, to 1984. The two met on the set of his television movie, Someone's Watching Me! (1978). The couple had a son, John Cody (born May 7, 1984) shortly before they separated. During their marriage, the couple lived in Hollywood Hills but according to Barbeau remained "totally outside Hollywood's social circles".[11]

Barbeau married actor/playwright/producer Billy Van Zandt, thirteen years her junior, on December 31, 1992. The two met in 1991 when Barbeau was cast in the west coast premiere of his play, Drop Dead! Billy is the half-brother of musician/actor Steven Van Zandt. She gave birth to twin boys, Walker Steven and William Dalton Van Zandt, on March 17, 1997, at age 51, claiming she was the only one on the maternity ward who was also a member of AARP.[16]

Captain Murphy, a character from the animated television series Sealab 2021, has an obsession with Barbeau and mentions her in several episodes. In the episode "I Robot", he ponders becoming an "Adrienne Barbeau-bot" with laser beam eyes and "D-Cups Full of Justice". In the episode "I Robot Really" Captain Murphy succeeds in having his brain placed inside a robot body which he calls The Barbeau-bot. The Barbeau-bot not only has "D-Cups of Justice" but also chainsaw hands with laser targeting. Barbeau was mentioned in Adult Swim cartoons by the same people as far back as Space Ghost Coast to Coast episode 32 "Jacksonville", in which George Lowe, voice of Space Ghost, is seen as a handyman who has finished caulking a window and is credited as "Adrienne Barbeau".

An episode of Sabrina, the Teenage Witch (season 6, episode 5) features a storyline in which Miles develops an obsession with Barbeau, going so far as to buy a cardboard cut-out of her. Barbeau herself makes a cameo appearance at the end of the episode. Upon meeting her, Sabrina compliments Barbeau for her performance as Senator Cretak in the aforementioned Star Trek: Deep Space Nine episode.

In the Mystery Science Theater 3000 episode featuring the movie The Thing That Couldn't Die, Mike Nelson is being sent people he is thinking of by a race of omnipotent beings in one of the "host segments". The person appears and begins to beat up Mike in a manner similar to Finnegan in the classic Star Trek episode "Shore Leave". Mike thinks of Adrienne Barbeau at the insistence of one of his robot companions. Barbeau is played by Mike Nelson's real-life wife Bridget Jones Nelson.