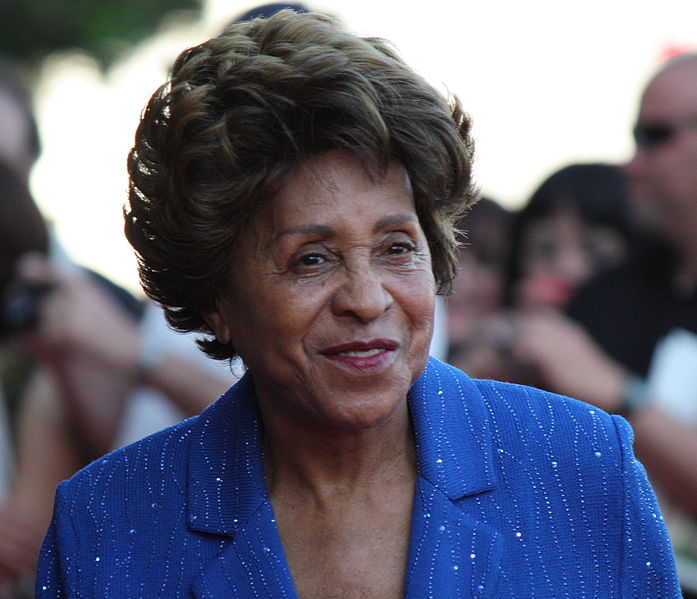 Marla Gibbs (born Margaret Theresa Bradley; June 14, 1931) is an American actress, comedian, singer, writer and producer, whose career spans five decades. Gibbs is known for her role as George Jefferson's maid, Florence Johnston, in the CBS sitcom, The Jeffersons (1975-85), for which she received five nominations for Primetime Emmy Award for Outstanding Supporting Actress in a Comedy Series. She also starred in the show's spin-off Checking In (1981) and the NBC sitcom, 227 (1985–90); Gibbs co-produced the latter series, played the lead role of Mary Jenkins, and sang the theme song.[1]

The younger of two sisters, Gibbs was born Margaret Theresa Bradley on June 14, 1931, at Cook County Hospital in Chicago, Illinois to Ophelia Birdie (née Kemp) and Douglas Bradley.[3] She attended Wendell Phillips Academy High School in the Bronzeville neighborhood on Chicago's South Side. She graduated in 1949.[4] Shortly after high school, Gibbs moved to Detroit, Michigan, where she attended Peters Business School. She worked as a reservations agent for United Airlines before relocating with her children from Detroit to Los Angeles.
Read more...

Gibbs got her first acting job in the early 1970s, in the blaxploitation films Sweet Jesus, Preacher Man and Black Belt Jones. In 1975 she was cast as Florence Johnston, the family's maid, in the CBS comedy series The Jeffersons. For her performance on the series, Gibbs was nominated for an Primetime Emmy Award for Outstanding Supporting Actress in a Comedy Series five times, and once for a Golden Globe Award for Best Supporting Actress - Series, Miniseries or Television Film. In 1981 she starred in the short-lived spin-off of The Jeffersons, titled Checking In.[2] Gibbs responded in a 2015 interview on Broadway Showbiz, when asked if she'd based any of her characters on real-life people: "Yes, Florence was like my aunt and grandmother so I lived it. She came easy to me so I'm like Florence in giving smart answers, but I was also shy so I wouldn't have dared to say some of the things Florence said. I prefer to do whatever I can do at the moment. Whoever's hiring me at the moment...that's what I'm supposed to do. My favorite is drama. I'm doing that now (on Scandal), but also still doing comedy on Hot in Cleveland."[5] In 1985, when The Jeffersons was cancelled after 11 seasons, Gibbs was the lead actress in the NBC sitcom, 227. The series aired until 1990, producing 116 episodes. Two decades later, Gibbs teamed again with former 227 co-star Jackée Harry in The First Family, where Gibbs had a recurring role as Harry's on-screen mother Grandma Eddy. Then, she again worked with Harry in the independent film Forbidden Woman.

Gibbs had a number of supporting film roles, and guest starred on The Fresh Prince of Bel-Air, Touched by an Angel (with Della Reese), Judging Amy, ER, and Southland.[6] From 1998 to 2002 she had a recurring role on The Hughleys. In 2012, Gibbs appeared in the Tyler Perry film Madea's Witness Protection,[7] and in 2014 she starred in the independent film, Grantham & Rose.[8][9]

In 2015, Gibbs has made two appearances in the Shonda Rhimes' drama series, Scandal.[10] She later guest starred on Hot in Cleveland, American Horror Story: Hotel and This Is Us. In 2018, she was cast in a recurring role on the ABC drama series Station 19.[11] Gibbs also has had starring roles in two television pilots: Old Soul alongside Ellen Burstyn and Rita Moreno for NBC in 2014, and ABC's Jalen Vs. Everybody in 2017.[12] In film, she co-starred in Lemon and Please Stand By.

Gibbs owned a jazz club in South Central L.A. called Marla's Memory Lane Jazz and Supper Club from 1981 to 1999. As a singer, she released a number of albums.[citation needed].

Gibbs was married to her high school sweetheart Jordan Gibbs from 1955 to 1973; the couple had three children:[2] Angela Gibbs, Dorian Gibbs and Joseph Gibbs. Her older sister is the late actress Susie Garrett. Her daughter Angela Gibbs is also an actress who appeared on the TV show Sanford and Son and movies such as Together Brothers, Drumline and Think Like A Man Too. On July 31, 2014, Gibbs attended the Leimert Park Village Book Fair in Los Angeles, California to pay tribute to Maya Angelou, who died on May 28, and Ruby Dee, who died on June 11.[13] On January 11, 2016, Gibbs and former 227 co-star, Jackée Harry, attended the funeral of Grammy Award-winning singer Natalie Cole at the West Angeles Church of God in Christ in Los Angeles, California.[14] Gibbs co-starred opposite Cole in the TV movie Lily in Winter.[citation needed]

Report a problem
Write to Marla Gibbs at FanPal • 2022