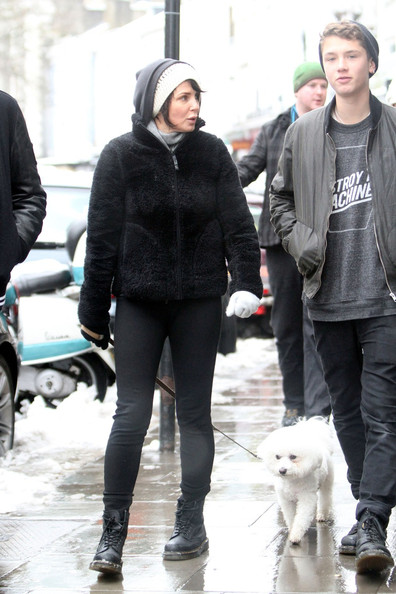 Frost was born in Islington, north London, to psychedelic artist David Vaughan, who worked for the Beatles, and his then-16-year-old muse, actress Mary Davidson.[1]

She has described her childhood as a "chaotic but positive experience,"[1] as she was born in Islington but spent much of her youth in Ashton-under-Lyne, Lancashire, after her parents separated. Her parents had six relationships between them, which gave her four sisters and five brothers, including fellow actresses Holly Davidson and Jade Davidson; primary school teacher Jessi Frost, brothers called Gabriel Jupiter and Tobias Vaughan; and a sister named Sunshine Purple Tara Velvet.[2]

Frost appeared in a Jelly Tots advertisement in 1968 at age three and appeared with Morecambe and Wise in 1970 at age five. She attained a scholarship to the Italia Conti Academy,[2] but after an early eating disorder,[3] she gave up acting at 13 and attended Hampstead School instead.[4] On graduation[when?], she left home to escape her parents, and in 1984, at age 19, she appeared in the play Mumbo Jumbo at the Royal Exchange Theatre, Manchester, directed by Nicholas Hytner.[citation needed]

As an actress, Frost has performed in Press Gang and Casualty.[5] Her first film role was in Empire State (1987), although her most memorable[opinion] film appearance is as vampire Lucy Westenra in Francis Ford Coppola's Bram Stoker's Dracula (1992). She earned her living mainly through appearing in music videos, including for Pulp's song "Common People", Planet Perfecto featuring Grace's "Not Over Yet '99", and various productions for Spandau Ballet, where she met first husband Gary Kemp. Frost and Kemp appeared together in the film The Krays (1990). They appeared in two more films together. One of these films, Magic Hunter (1994), required them to participate in a love scene, although they were separated at the time.[citation needed]

Frost took a role opposite Jude Law in Paul W. S. Anderson's directorial debut Shopping. After marrying Law and having three children with him, she cut down on her acting commitments in the late 1990s, and moved into producing and co-founding the production company Natural Nylon.[citation needed]

In 1999, Frost co-founded the fashion label Frost French with her friend Jemima French. The label started in lingerie and expanded into clothing collections. Frost French won Elle's Designers of the Year Award 2004. In 2004, she wrote, presented, and produced a short-lived series What Sadie did next... for E4, and in 2005 appeared in Eating with...Sadie Frost on BBC2. In March 2006, Frost flew to South Africa to part-fund an orphanage for the Homes of Hope project. In September 2006, aged 41, she posed nude for Canadian photographer Bryan Adams for a PETA anti-fur advert to coincide with London Fashion Week.[6] In 2009, she made her West End debut in Touched ... For the Very First Time, a new one-woman show by Zoë Lewis, directed by Douglas Rintoul and produced by Imogen Lloyd Webber.[citation needed]

In January 2010, Frost starred in the play Fool for Love alongside Carl Barat, formerly of The Libertines. The play showed at the Riverside Studios theatre.[7]

Frost met Jude Law during the work on the film Shopping. They married on 2 September 1997 and had three children: a son born in 1996; a daughter called Iris Law; and another son born in 2002. Frost and Law divorced on 29 October 2003.[9] Frost named model Kate Moss as Iris's godmother and BBC Radio 1 deejay Nick Grimshaw as Rudy's godfather.[10]