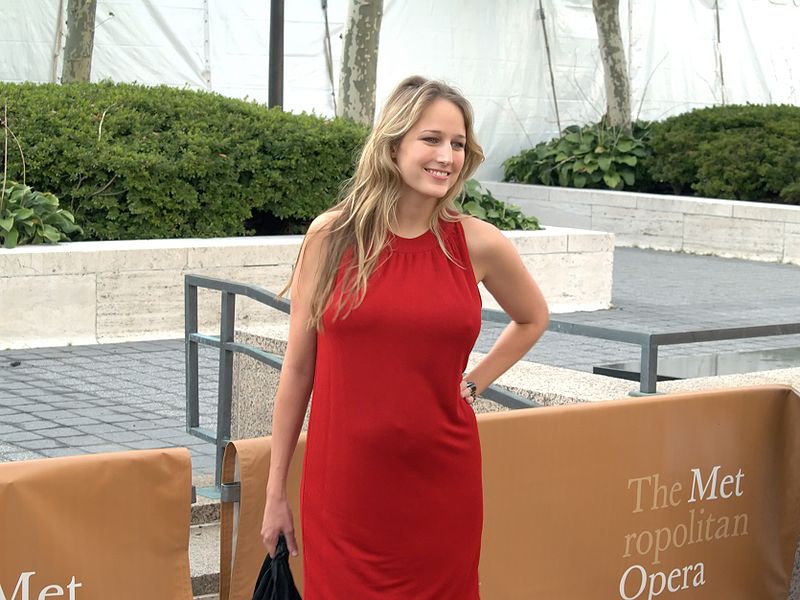 Liliane Rudabet Gloria Elsveta "Leelee" Sobieski (born June 10, 1983[1]) is a retired American actress. She achieved fame in her teens with roles in films such as Deep Impact (1998), Eyes Wide Shut, Never Been Kissed (both 1999), Joy Ride and The Glass House (both 2001). She received Emmy Award and Golden Globe Award nominations for her portrayal of the title character in the television film Joan of Arc (1999), and a further Golden Globe nomination for her performance in the miniseries Uprising (2001).

Sobieski continued to work in films and on television up until 2016, when it was revealed that she had retired from acting to focus on her family.[2]

Sobieski was born in New York City.[3] Her mother, Elizabeth Sobieski (née Salomon), is an American film producer and screenwriter who also works as Sobieski's manager,[citation needed] and her father, Jean Sobieski, is a French-born painter and former actor.[4][5] Sobieski has a younger brother, Robert "Roby".[4]

Sobieski's first name, "Liliane", was the name of her paternal grandmother. One of her middle names, "Elsveta", is derived from "Elżbieta", which is the Polish equivalent of "Elisabeth".[6] Her maternal grandfather, United States Navy Captain Robert Salomon, was Jewish. Her maternal grandmother was of Ashkenazi Jewish and Dutch descent. Sobieski grew up in a "pan-religious" family; she has said that she is "proud of melting pot roots".[7][8] She graduated from Trevor Day School in 2001[9] and studied literature and fine art at Brown University but did not graduate.[10]

Sobieski was spotted by a talent scout who noticed her while he was scouting the cafeteria of a New York City private school as part of a recreational visit.[3] After that encounter, she became a candidate for the role of Claudia in Interview with the Vampire (1994), which she eventually lost out to Kirsten Dunst. She portrayed the character of Anna Yates in the 1994 TV movie Reunion, which starred Marlo Thomas. Next, she played a lead role in A Horse for Danny, a made-for-television film which was released in 1995. Later, she had her first role in a studio film, as Martin Short's character daughter in the Tim Allen comedy Jungle 2 Jungle. In 1999, Sobieski played a modern Lolita in Stanley Kubrick's Eyes Wide Shut. The film opened to generally positive reviews, but it generated several censorship controversies due to the explicit nature of its sex scenes. Recalling acting alongside Tom Cruise, she said he was "very kind and considerate with me," and says her most vivid recollection of Stanley Kubrick was that he "genuinely seemed to hold something magic".[11]

She rose to fame in her mid-teens with her appearance in the movie Deep Impact (1998).[12] The film was a major financial success, grossing over $349 million worldwide on a $75 million production budget. Deep Impact brought her to the attention of many casting directors. That same year Sobieski appeared in the Merchant Ivory film A Soldier's Daughter Never Cries. Sobieski's performance received praise from the critics; Emanuel Levy of Variety wrote that "the graceful Sobieski registers strongly as a potential star, combining physical charm with technical skill."[13] The film also garnered her a Young Artist Award nomination, as well as a nomination by the Chicago Film Critics Association.

In 1999, she was cast as a supporting role in the teen comedy feature Never Been Kissed, which was starring Drew Barrymore. The title role in the TV movie Joan of Arc (1999) earned her an Emmy nomination and a Golden Globe nomination, and she became the youngest actress ever to portray Joan of Arc in a movie. She received a second nomination for a Golden Globe for her portrayal of Tosia Altman in the 2001 TV film Uprising. In 2000, Sobieski played the female lead in the film Here on Earth, for which she received a Teen Choice Award nomination.

In 2001, Sobieski played the lead role in the road horror film Joy Ride with Paul Walker and Steve Zahn. The film received several favorable reviews.[14] Garth Franklin of Dark Horizons stated that Sobieski "does a better job than usual".[15] That same year, she starred in the thriller The Glass House, alongside Diane Lane. The film was panned by critics,[16] and had a disappointing weekend $5,738,448 gross with little promotion.[17] My First Mister, a low-budget drama, was also released in 2001. Sobieski's performance in the film was praised by critics, with Pete Croatto of Filmcritic.com writing that "As for Sobieski, who I've always liked, she does another fine job. This time it's with a shaky character - the troubled Goth chick", and "Sobieski finds her character's human touch and runs with it."[18]

Sobieski landed a starring role in the independent film L'Idole (2002), which opened at the Toronto International Film Festival. She then starred alongside John Cusack in the drama feature Max. She portrayed the character of Cecile in the miniseries Les Liaisons dangereuses (2003) with Catherine Deneuve and Rupert Everett, an adaptation of Laclos's classic novel of sexual intrigue made use of her fluency in French. She portrayed the role of Deianira in Hercules, a television miniseries which was premiered on May 15, 2005.[19]

In May 2006, the experimental-indie film Lying, in which Sobieski starred alongside Chloë Sevigny and Jena Malone, was released.[20] The film premiered at the 2006 Cannes Film Festival and had a limited release in the United States in 2008. She starred in the American drama Heavens Fall as one of the young women that accuse nine black youths of rape in the segregated South.[21] That same year, she appeared in the horror films In a Dark Place and The Wicker Man, a movie starring Nicolas Cage, which was a remake of the 1973 film of the same title. It was not well received by critics with The New York Times stating that the movie "is neither haunting nor amusing; just boring."[22]

In January 2008, she appeared in In the Name of the King: A Dungeon Siege Tale, a fantasy film inspired by the Dungeon Siege video game series. For her performances in both 88 Minutes and A Dungeon Siege Tale, she received a Razzie Award nomination for Worst Supporting Actress. Sobieski then starred in the direct-to-video film Night Train, with her Joy Ride co-star Steve Zahn. In the film, she played the role of Chloe, a potentially lethal med student. Night Train is about three strangers that meet aboard a Polar Express-like train on one fateful night.[25]

In 2009, she had a small role in the biographical crime drama Public Enemies, and starred with Denise Richards and Jamie Kennedy in the 2010 film Finding Bliss, a romantic comedy about a straitlaced aspiring filmmaker who is forced to go to work for a producer of adult films.[26][27] Finding Bliss was released on June 4 in New York City and June 11 in Los Angeles. She guest appeared in the television series Drop Dead Diva episode "A Mother's Secret".[28] Sobieski also played a lead role in the drama thriller Acts of Violence. The film tells the story of a man who is on a mission to kill the men who raped his wife. Filming of the movie began and finished in Los Angeles, California. The film was released between April and May 2010.

She also joined the cast of a comedy-drama entitled The Last Film Festival, co-starring Dennis Hopper, Jacqueline Bisset, and Chris Kattan. Filming took place in Queens in 2009.[29] The film was released theatrically in Los Angeles on 30 September 2016.

Sobieski guest-starred in an episode of The Good Wife which aired in January 2011; her role was the girlfriend of one of Lockhart-Gardner-Bond's most influential clients. In the show, Sobieski's character is accused of using prescription stimulants.[30] Sobieski starred in CBS' drama NYC 22 as a rookie New York City police officer.[31][32][33] Sobieski landed the role of Abby Gibbons in the movie Branded which was released in 2012.

She began her art career using her married name Leelee Kimmel. She paints and sculpts abstract work,[10] [34] and also works in VR as well, using Google Tilt Brush.[10] She uses bright colors, abstracted and textured shapes floating on either a large black or white background.

Her 2018 solo exhibit debut, “Channels,” opened at the Journal Gallery in Williamsburg, Brooklyn, and garnered positive reviews. [10][35] Vogue said the exhibit and her work "warrants serious merit..." [36] She then debuted her first UK exhibit titled “Wormhole” at the Simon Lee Gallery in London. In this latest installment, she presents large-scale abstract paintings that are confrontational in both colour and dimension, exploring themes of creation and destruction. [37] “Kimmel’s world is very much her own - a heady mix of daftness and profundity - and a space that’s potentially fascinating, yet disorientating for those unfamiliar with it. Such are the worlds she builds in her paintings, too, and which expand beyond the canvas into gloriously gelatinous sculptures and a pioneering VR piece.” [38] Interview Magazine says, "Leelee Kimmell has always been an artist." [39]

Sobieski speaks fluent French, which she learned from her father, who lives in France.[40][41] In January, 2009, Sobieski began dating fashion designer Adam Kimmel, the son of American real estate developer Martin Kimmel and grandson of American boat racer and designer Donald Aronow. They were engaged on May 28, 2009 and it was made public on June 23, 2009, when fans at the premiere of Public Enemies spotted Sobieski wearing an engagement ring. The couple officially announced their engagement on July 17, 2009.[42][43][44]

During an interview, Sobieski spoke about her views on having happiness and a positive attitude,

Sobieski, in a 2001 interview with IGN, expressed her thoughts about whether the movies she was making were escapist fare, or that they had a deeper message for society,

Joy Ride isn't a film you would make a statement with. It's a fun, jump out of life film. That's great. I love those films. Those films are great in times like these too. You can make a point with a film and help society or not. Take a film like Bulworth, a fantastic film. There are certain films like that, that can appeal to everybody and have a message in it and that's really great.[48]

In 2012, Sobieski confirmed "I don't do movie stuff anymore". Commenting on the reasons for her early retirement to Us Weekly, Sobieski said, "I am just focused on my kids. I think that's mainly why I stopped...Also, ninety percent of acting roles involve so much sexual stuff with other people, and I don't want to do that."[49]