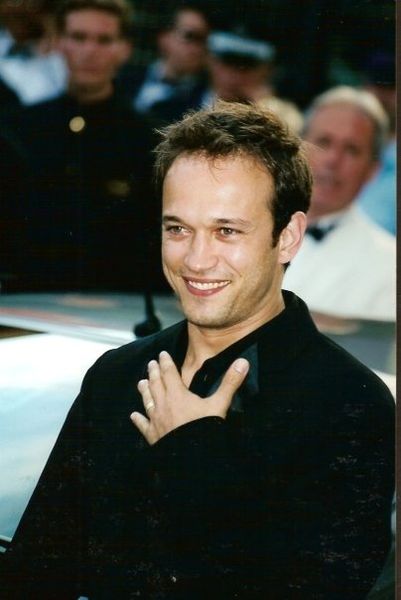 Vincent Perez (born 10 June 1964) is a Swiss actor, director and photographer. He is best known internationally for playing the title character, Ashe Corven, in The Crow: City of Angels,[1] and for starring in Queen of the Damned, playing Marius de Romanus. Some of his notable films in French cinema include Cyrano de Bergerac, Le Bossu, La Reine Margot and Indochine.[2][3]

Perez was born on 10 June 1964 in Lausanne, Switzerland, to a Spanish father and a German mother.[3] His mother was a homemaker and his father worked in the import-export business.[4] He commenced acting studies in Geneva, followed by the CNSAD and completed his training at the school of the Théâtre Nanterre-Amandiers.[2] He started acting in theatre before starring in films.[3]
Read more...

His breakthrough role was starring as Christian opposite Gérard Depardieu in Cyrano de Bergerac.[5] He was nominated for a César Award.[6] He has since appeared in various films and his onscreen leading ladies have included Catherine Deneuve, Kim Basinger, Isabelle Adjani and Aaliyah.[3]

He has also gone into directing. Two of his shorts, L'échange and Rien à dire, have been nominated for the Palme d'Or at the Cannes Film Festival.[7]

He has exhibited his photographic work during festivals and in art galleries.[8] For example, his exhibition entitled Face to Face, which featured photographs of Carla Bruni, Johnny Hallyday and Gerard Depardieu, was unveiled at Rencontres d'Arles, an annual photography festival in Arles, France.[8] In December 2012, he exhibited his photographs of dancers of the Bolshoi Ballet at the RuArts in Moscow, Russia.[9] Two years later, in December 2014, he exhibited them again at the Accademia Fine Art Gallery in Monte Carlo, Monaco.[8][10]

He is married to French actress Karine Silla, ex-partner of Gerard Depardieu[11] and sister of French producer Virginie Besson-Silla.[12] Perez and Silla have three children together.[8]