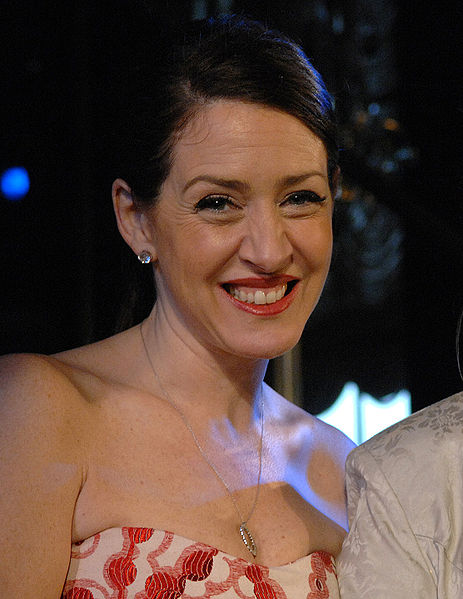 Joely Fisher (born October 29, 1967[1]) is an American actress and singer. She is best known for her work on television as Paige Clark on the ABC sitcom Ellen as well as Joy Stark in the Fox sitcom 'Til Death. She is also known for singing on Broadway in the 1990s.

Fisher was born in Burbank, California, the elder daughter of singer Eddie Fisher and actress Connie Stevens.[1] Her younger sister is actress Tricia Leigh Fisher. She is the half-sister of actress Carrie Fisher and producer Todd Fisher, from her father's previous marriage to actress Debbie Reynolds.[1] Her parents divorced when she was age two, and she was raised by her mother.[1]

Fisher and her sister toured the world with Stevens, attending different schools and having tutors. Fisher graduated from Beverly Hills High School, then attended Emerson College in Boston, as well as the University of Paris for one semester,[1] and, in the summer of 1987, an acting retreat conducted in Italy by coach Sandra Seacat.[2]

Her first movie role was Averil in the comedy Pretty Smart (1987), which starred her sister, Tricia. Joely then played Kris in TV's Schoolbreak Special drama Dedicated to the One I Love (1991) opposite Danielle Ferland. Next came the feature I'll Do Anything (1994) starring Nick Nolte, which helped her career as bigger roles followed.

She had a variety of guest roles on series such as Growing Pains, Blossom, Caroline in the City, The Golden Palace, The Outer Limits, Grace Under Fire and Coach.

In 1994, she was cast as Paige Clark on the sitcom Ellen. She played the role until the series ended in 1998. That same year, she earned a Golden Globe Award nomination. She also sang the theme song "Who has a perfect smile? Who has a comical style, who likes to hang out with her friends, who who? Ellen!" with Clea Lewis.[citation needed]

She followed Ellen with the role of Dr. Brenda Bradford in the feature movie Inspector Gadget (1999) opposite Matthew Broderick.

Joely's career in music not only landed her on Broadway but she was featured in Albums. Her most noted album was "Tradition; a family at Christmas" which she, her mother Connie Stevens all sang various Christmas carols. She sang her own solo "Grown Up Christmas List". Her vocals are also heard singing "One For My Baby" in Harold Arlen's album "STAGE"

From 2003 until 2005, she starred in the Lifetime network's drama series Wild Card as insurance investigator Zoe Busiek. After that, she had a recurring role as Lynette's boss Nina on Desperate Housewives.

From 2006 until 2010, Fisher starred opposite actor Brad Garrett as Joy Stark in the Fox TV sitcom 'Til Death.

In late 2008, she became an artist ambassador for Save the Children. She traveled to Xai-Xai, Mozambique, to visit with children that are part of the child sponsorship programs.[6]