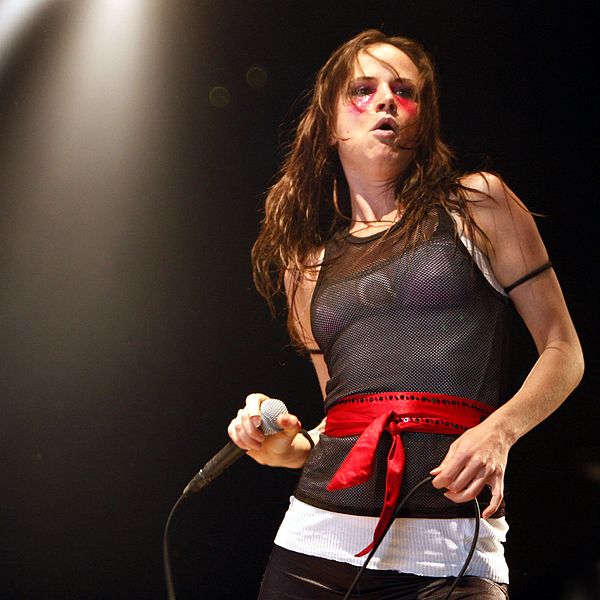 Juliette L. Lewis[1] (born June 21, 1973)[1] is an American actress and singer. She is known for her portrayals of offbeat characters, often in films with dark themes.[2] She began her career with small roles in film and on television during the late 1980s. In 1991, she received acclaim for her performance in Cape Fear, which earned Lewis nominations for an Academy Award and a Golden Globe.

Lewis received an Emmy Award nomination for her performance in the HBO film Hysterical Blindness (2002). Subsequent television work has included series' such as The Firm (2012), Wayward Pines (2015), and Secrets and Lies (2015-16).

In 2004, Lewis launched a career as a singer and musician, leading the American rock band Juliette and the Licks. She has since embarked on a solo career.

Lewis was born in Los Angeles, California, to Geoffrey Lewis, an actor, and his second wife, Glenis (Duggan) Batley, a graphic designer.[3] She has eight siblings - brothers Lightfield (an actor who starred in The New WKRP in Cincinnati), Peter, Miles, and Matthew; and sisters Brandy, Hannah, Dierdre Lewis, and Emily Colombier.[4][5][6]
Read more...

Lewis appeared in The Wonder Years as Wayne's girlfriend in Episodes 24, 34 and 36.[7] She also played Audrey Griswold in National Lampoon's Christmas Vacation. Lewis first garnered international attention and acclaim in 1991 with her turn as Danielle Bowden in Martin Scorsese's remake of Cape Fear, for which she was nominated for a Golden Globe Award,[8] as well as an Academy Award for Best Supporting Actress.[9] Over the next few years, she appeared in Woody Allen's Husbands and Wives, Peter Medak's Romeo Is Bleeding,[10] and opposite Brad Pitt in Kalifornia. In 1993, she acted alongside Leonardo DiCaprio and Johnny Depp in the drama film What's Eating Gilbert Grape.[11] She played Mallory Knox in Oliver Stone's Natural Born Killers.[12] She played a rock singer in the film Strange Days, doing her own singing on covers of two songs written by PJ Harvey.[13]

She received an Emmy nomination for her performance in Hysterical Blindness in 2003.[14] She also appeared in the HIM music video for "Buried Alive By Love" in 2003.[15]

She appeared in the 2004 film Starsky & Hutch, playing the role of Kitty, as Reese Feldman's girlfriend.

Lewis appeared in Rockstar Games' Grand Theft Auto IV, providing the voice of "Juliette", the host of fictional radio station "Radio Broker" (on which appears the Juliette and the Licks song 'Inside the Cage)'.[16] She appeared in a Gap commercial in which she was dancing with Daft Punk to the tune of the song "Digital Love".[17] She also appeared in the Jan Kounen film Renegade with Vincent Cassel. In 2012 she starred in the short-lived series The Firm, on NBC as Tammy, assistant to lead character Mitch McDeere (Josh Lucas).[18] Secrets & Lies 2015 TV Series

She reprised her role as Audrey Griswold in 2012 in a series of Old Navy holiday commercials featuring the Griswold family. In 2015, she had a small role in the television series Wayward Pines, a psychological thriller by M. Night Shyamalan.

Lewis will appear in the premier season of The Conners as Blue, girlfriend of Darlene Conner's ex-husband David Healy.[19]

Lewis on Terra Incognita tour with the New Romantiques at Parkpop festival 2010, the Hague, the Netherlands

Lewis launched a career as a solo singer and musician, leading American rock band Juliette and the Licks until 2009 when she went solo and released the album entitled Terra Incognita.[20]

Lewis features on the track "Bad Brother" by the band The Infidels, from The Crow: Salvation Soundtrack album, which was released on April 2000. Lewis has also appeared on three tracks by electronic music group The Prodigy's 2004 CD Always Outnumbered, Never Outgunned ("Spitfire", "Get Up Get Off", and "Hot Ride").[21] In 2006, Blender magazine included her in their hottest women of rock music list.[22]

Lewis performing with the Licks at the Eurockéennes 2007

In 2009, Lewis performed at the Przystanek Woodstock in Poland.[23] In 2010, she played at the Rock for People festival in the Czech Republic.[24] In December 2010, Lewis hosted the game television show Never Mind the Buzzcocks and repeated in January 2012.[25]

In 2013, Lewis contributed backing vocals to the track, "Saint of Impossible Causes", on Joseph Arthur's tenth studio album, The Ballad of Boogie Christ. She then appeared in the music video for "City of Angels" by Thirty Seconds to Mars.[26]

In 2015, Lewis contributed vocals to the song "Stickup" by electronic artists Karma Fields & Morten, which was released on Monstercat.[27]

Lewis has supported Little Kids Rock, a US nonprofit organization that works to restore and revitalize music education in disadvantaged U.S. public schools, by painting a Fender Strat guitar and donating it to an auction to raise money for the organization.[28]

After dropping out of high school, Lewis got into trouble with the law for driving illegally at age 15, then was arrested for illegally patronizing a nightclub when she was 16. From 1990 to 1993 Lewis dated Brad Pitt. While in her 20s she went into rehabilitation for drug addiction.[29]

Lewis married professional skateboarder Steve Berra in 1999; they divorced in 2003.[30]

Lewis identifies herself as both a Christian and a Scientologist.[31][32][33]