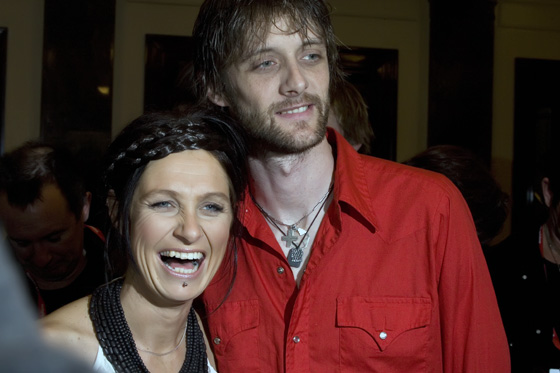 Kasey Chambers (born 4 June 1976) is an Australian country singer-songwriter. She is the daughter of singer and musician Bill Chambers, and the sister of musician and producer Nash Chambers.

Chambers recorded her solo album The Captain on Norfolk Island over a few weeks in late 1998 with Nash Chambers producing the album and Bill Chambers on guitar. US country musicians Buddy Miller and Julie Miller added guitars and vocals to four tracks. The Captain was released in 1999 in Australia and in 2000 in the US. Chambers won the 1999 ARIA Award for "Best Country Album" for The Captain and a year later she would win "Best Female Artist". The strong word of mouth would eventually lead to The Captain going double platinum in Australia. The Captain would eventually reach the top 50 of the Billboard country albums in 2001 with Chambers touring the US as support act to Lucinda Williams. Subsequently, she supported Emmylou Harris on her Australian tour. Chambers would receive further exposure when "The Captain" was played on episode 8 of the third season of HBO's The Sopranos titled "He Is Risen".

Chambers' second album Barricades & Brickwalls was released in late 2001 debuting at No. 4 in the ARIA album charts. The record really took off in early 2002 with lead single "Not Pretty Enough" going to No. 1 on the ARIA singles charts. Chambers became the only Australian country artist to have a No. 1 single and album on the charts in that country simultaneously. Subsequent singles "Million Tears" and "If I Were You" also made the Australian Top 40 singles charts in 2002.

While "Not Pretty Enough" eventually went double platinum, Barricades & Brickwalls would achieve sales of 7x platinum in Australia meaning Chambers had the second best selling single and album by an Australian artist in 2002 behind Kylie Minogue whose single Can't Get You Out of My Head and album Fever became the biggest successes of the year. At the 2002 ARIA Awards, Chambers won "Album of the Year", "Best Female Artist" and "Best Country Album". Barricades & Brickwalls was released in the US in 2002 peaking just outside the top 100 of the Billboard 200 album charts, topping the Billboard Heatseeker Charts and reaching the top 20 of the Billboard country charts. The album also received a generally positive critical response.[1]

She recorded a cover of the Cyndi Lauper song "True Colours" which became the theme song of the 2003 Rugby World Cup[2] and reached the top 5 in Australia in May 2003. It was the 76th best-selling single in Australia that year[3] and won gold accreditation in the Australian ARIA charts.[4]

Chambers released her third solo album Wayward Angel in Australia on 31 May 2004. It debuted at No. 1 on the Australian charts and went platinum in its first week of release. Singles from the album include "Hollywood", "Pony" and "Saturated". Following the Boxing Day Tsunami, Chambers appeared at the Wave Aid fundraising concert in Sydney, to raise funds for aid organisations working in disaster affected areas.

Chambers's next album, Carnival, debuted in the No. 1 position on the ARIA album charts in late August 2006. The lead single, "Nothing at All" also reached the top ten of the singles chart.

Chambers and Shane Nicholson with Troy Cassar-Daley played at the Melbourne Cricket Ground on 14 March 2009 for Sound Relief, a multi-venue rock music concert in support of relief for the Victorian Bushfire Crisis.[5][6] The event was held simultaneously with a concert at the Sydney Cricket Ground.[5] All the proceeds from the Melbourne Concert went to the Red Cross Victorian Bushfire relief.[5][6] Appearing with Chambers in Melbourne were, Augie March, Bliss N Eso with Paris Wells, Gabriella Cilmi, Hunters & Collectors, Jack Johnson, Jet, Kings Of Leon, Liam Finn, Midnight Oil, Paul Kelly, Split Enz and Wolfmother.[7]

In 2010 the Australian Independent Record (AIR) Award for 'Best Independent Country Album' went to the Australian country family dynasty - Kasey Chambers, Poppa Bill and the Little Hillbillies - for their album. A collaboration of 3 generations - the 16 original songs were crafted together by Kasey, her father Bill, brother Nash and their collective brood of Little Hillbillies.[8]

Chambers was born in Mount Gambier, South Australia.[9] She has an older brother, Nash Chambers and her father is Australian Country musician Bill Chambers. She grew up on the Nullarbor Plain and the tiny fishing village of Southend, South Australia. Her family owned the local fish and chip shop for a time, and were playing and touring as a family band, The Dead Ringer Band, which included her father, Billy Chambers, a Golden Guitar Award songwriter, and Nash Chambers, now a well-known music producer and performer. The Dead Ringer Band continued to tour locally and interstate, gaining support and popularity along the way.[10] Chambers credits Emmylou Harris as one of her primary influences, recalling that Harris' music was frequently played by her father when she was a child.[11]

These awards were established by Australasian Performing Right Association (APRA) in 1982 to honour the achievements of songwriters and music composers, and to recognise their song writing skills, sales and airplay performance, by its members annually. Since 1997 the association has formed an alliance with Australasian Mechanical Copyright Owners Society (AMCOS), which manages mechanical royalties, to present the awards.[15][16] Kasey Chambers has won 10 APRA Music Awards out of 27 nominations.[17]

These awards have been presented by the Australian Record Industry Association (ARIA]) since 1987. Kasey Chambers has won 12 ARIA Music Awards from 32 nominations (1 pending), including her first win in 1999 for the Best Country Album for Captain.[18] As from November 2017, she has won that category eight times.[18]