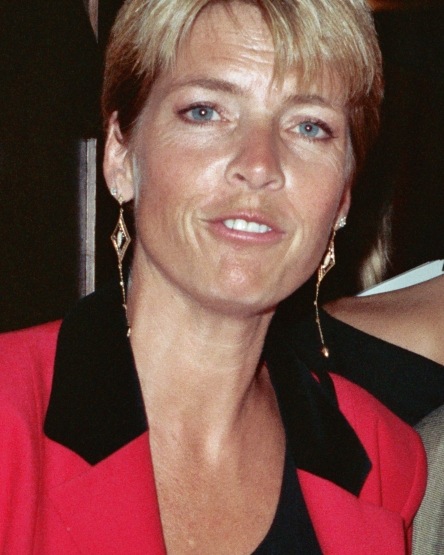 Meredith Ann Baxter (born June 21, 1947)[1] is an American actress and producer. She is known for her roles on the ABC drama series Family (1976-80) and the NBC sitcom Family Ties (1982-89), credited as Meredith Baxter Birney. A five-time Emmy Award nominee, one of her nominations was for playing the title role in the 1992 TV film A Woman Scorned: The Betty Broderick Story.

Baxter was born in South Pasadena, California, the daughter of actress turned director/producer Whitney Blake and Tom Baxter, a radio announcer.[2] After her parents were divorced in 1953, Baxter and her two brothers, Richard (born 1944) and Brian (born 1946), were raised by their mother in Pasadena. Her second stepfather was situation-comedy writer Allan Manings. She and her Family Ties co-star, Michael Gross, were both born on June 21, 1947.

Baxter got her first big break on television in 1972 as one of the stars of Bridget Loves Bernie, a CBS television-network situation comedy. The series was canceled after one season, but her co-star, David Birney became her second husband in 1974. Following their marriage and until their divorce in 1989, she was credited as Meredith Baxter Birney, under which name she became widely known several years later on Family. She played the role of Nancy Lawrence Maitland and received two Emmy Award nominations for Outstanding Continuing Performance by a Supporting Actress in a Drama Series (1977 and 1978).

After Family ended, she starred with Annette O'Toole and Shelley Hack in Vanities (1981), a television production of the comedy-drama stage play about the lives, loves and friendship of three Texas cheerleaders starting from high school to post-college graduation; it aired as a part of Standing Room Only, a series on the premium-television channel HBO.[citation needed]

In 1982, Baxter landed the role of Elyse Keaton, the former flower child matriarch of the Keaton family on the NBC sitcom Family Ties. In 1986, during her time on Family Ties, Baxter garnered critical acclaim for her dramatic performance as Kate Stark in the NBC television movie Kate's Secret, about a seemingly "perfect" suburban housewife and mother who is secretly suffering from bulimia nervosa. Following Family Ties, Baxter (whose marriage to Birney ended in 1989) produced and starred in telefilms. She portrayed a psychopathic kidnapper in The Kissing Place (1990) and was nominated for an Emmy Award for Outstanding Lead Actress in a Miniseries or a Special for her work in A Woman Scorned: The Betty Broderick Story (1992), based on the true story of a divorcée who was convicted of murder in the shooting of her ex-husband and his young wife. For her work on the television film My Breast (1994), she received a special award for public awareness from the National Breast Cancer Coalition. In 1997, Baxter once again played the mother of a character played by Michael J. Fox (who portrayed her son, Alex P. Keaton, on Family Ties), this time in two episodes of Spin City.[5]

In 2005, she began appearing in television commercials for Garden State Life Insurance Company. In 2006, she temporarily co-hosted — with Matt Lauer — Today, the NBC morning news and talk show. In 2007, she made a guest appearance on What About Brian, an ABC drama series. That same year, she also made several appearances as the dying mother of Detective Lilly Rush on Cold Case, a CBS police-procedural series. In recent years, Baxter created a skin-care line called Meredith Baxter Simple Works, which raises funds for Baxter's breast cancer research foundation.

Baxter was the guest speaker at the 2008 Southern Commencement for National University in La Jolla, California, and was awarded an honorary doctoral degree from the university.[6]

On March 1, 2011, Baxter's memoir, titled Untied, was published.[7] In the book, she details her early life, her unhappy and in some cases abusive marriages, her struggles with and recovery from alcoholism, and her realization that she is a lesbian. The book became a New York Times bestseller.[8]

She is also a spokesperson for Consumer Cellular, a cell-phone company advertised as providing a cheaper alternative for senior citizens. She currently voices the character "Elise Sr." in Dan Vs., which airs on The Hub. In April 2013, it was announced that Baxter will be in the season 4 finale episode of Glee, along with Patty Duke, as a mentor to Darren Criss's character Blaine Anderson and Chris Colfer's character, Kurt Hummel.[9] She also made a guest appearance on the ABC Family/Freeform series "Switched at Birth" as the widowed mother of Kathryn Kennish (portrayed by Lea Thompson).

On August 4, 2014, producers announced that Baxter would be joining The Young and the Restless, as Maureen, Nikki Newman's new drinking buddy, a "charming, intelligent, middle-class woman who has always aspired to a more privileged life than she has had. Baxter will start appearing on the program on September 8. She is also the mother to "Stich" Raybourne and Kelly Andrews.[10]

Baxter said she began her first same-sex relationship in 2002. She stated that finally coming to terms with her sexual orientation opened her eyes to the fact that for many years she knew something was different about her and why her relationships with men had failed.[15]

On March 1, 2011, Baxter made another intimate revelation while appearing on NBC's Today show. She promoted a new memoir that alleges emotional and physical abuse by her ex-husband David Birney, father of three of her children. ABC News tried to reach Birney for comment but could not. It claimed that he had told NBC he was denying the allegations. The ABC News website reported on March 1, 2011:

Meredith Baxter says in a new book, Untied, that she was a victim of emotional and physical abuse.

Baxter, the actress best known for playing hippie mom Elyse Keaton on the 1980s sitcom Family Ties, said that the abuser was her then-husband David Birney, who has denied the allegations.

In her memoir, Baxter alleges that Birney hit her more than once. "It was so sudden and unexpected, I couldn't tell you which hand hit me, or even how hard," she writes. "I do recall thinking, 'I'd better not get up because he's going to hit me again.' "

She writes that she coped with the marital violence by drinking heavily, but has been sober since 1990 (the year after she and Birney divorced).[16]

Regarding the fact that Baxter's marriage to Birney lasted throughout the entire seven seasons that she worked on Family Ties, ABC News explained,

Baxter said that her work helped her cope and she did not share her personal story with others.

"You learn to compartmentalize," she said on NBC. "When I got to the studio, my home life was not happening. Nobody knew anything. I didn't have a social life. I did my work, I went home."[16]

The day after Baxter discussed Birney on the Today show, she traveled to Chicago to appear on The Oprah Winfrey Show for further discussion of the topics covered in her Untied memoir.[17] Others who appeared included her Family Ties co-star Michael Gross. Winfrey's staff had arranged for him to surprise Baxter on-camera. Gross confirmed the assumption that Baxter had made throughout their seven years of working on the sitcom, that no one connected with the series had known or suspected that Baxter's husband was abusing her at the time. Gross was affectionate with Baxter on camera and expressed sorrow that she had endured such an ordeal for so long.[17]

Baxter was diagnosed with breast cancer in 1999 for which she was treated and from which she has fully recovered.[7]

Chad Everett and Baxter in 1975

Report a problem
Write to Meredith Baxter at FanPal • 2022