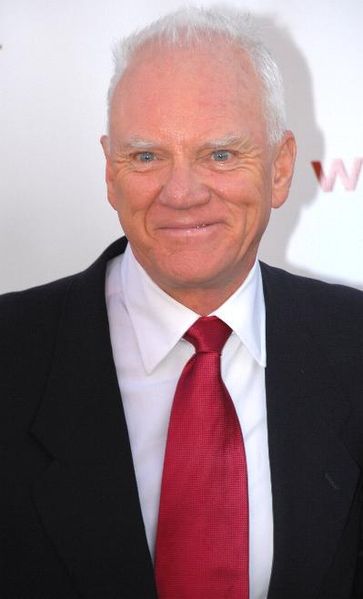 Malcolm McDowell (born Malcolm John Taylor; 13 June 1943) is an English actor, known for his boisterous and sometimes villainous roles. He trained as an actor at the London Academy of Music and Dramatic Art.

McDowell was born Malcolm John Taylor in Horsforth in the West Riding of Yorkshire. He is the son of Edna (née McDowell), a hotelier, and Charles Taylor, a publican. He is the middle of three siblings, with two sisters, Gloria (older) and Judy (younger).[2][3][4]

His family later moved to Bridlington, since his father was stationed at the nearby RAF Carnaby with the Royal Air Force. He grew up in Liverpool and worked in Planters nut factory in Aintree and in his father's pub in Burscough, Lancashire.[5] He is a fan of Premier League football team Liverpool and spent much of his boyhood on the Kop.[6][7] McDowell trained as an actor at the London Academy of Music and Dramatic Art (LAMDA).[8]

While enrolled in Cannock House School, McDowell began taking acting classes, and eventually secured work as an extra with the Royal Shakespeare Company. He made his film debut as school rebel Mick Travis in if.... (1968) by British director Lindsay Anderson. A landmark of British countercultural cinema, the BFI named if.... the 12th greatest British film of the 20th century.[9] McDowell's next roles were in Figures in a Landscape (1970) and The Raging Moon (1971). His performance in if.... caught the attention of Stanley Kubrick, who cast McDowell for the lead in A Clockwork Orange (1971), adapted from the novel by Anthony Burgess. He gained positive reviews for his performance as Alex DeLarge, a young hoodlum brainwashed by the British government in a dystopian future. He was nominated for Golden Globe, a National Society of Film Critics nomination, and a New York Film Critics Circle nomination as Best Actor.

He worked with Anderson again for O Lucky Man! (1973), which was inspired by McDowell's experience working as a coffee salesman, and Britannia Hospital (1982). McDowell regularly appeared on British television productions in the 1970s in adaptations of theatre classics, one example being with Laurence Olivier in The Collection (1976), as part of the series Laurence Olivier Presents. He starred in Aces High (1975) and co-starred in Voyage of the Damned (1976), and as Dornford Yates' gentleman hero Richard Chandos in She Fell Among Thieves (1978) and the title character in Caligula (1979). He made his Hollywood debut as H. G. Wells in Time After Time (1979). He has often portrayed antagonists, later remarking on his career playing film villains: "I suppose I'm primarily known for that but in fact, that would only be half of my career if I was to top it all up".[10] In his biography Anthony Burgess: A Life, author Roger Lewis commented on McDowell's later career: "his pretty-boy looks faded and he was condemned to playing villains in straight-to-video films that turn up on Channel 5".[11]

McDowell appeared in the action film Blue Thunder (1983) as F.E. Cochrane, and the horror remake Cat People (1982). In 1983, he starred in Get Crazy as Reggie Wanker, a parody of Mick Jagger. Also in 1983, McDowell starred as the Wolf (Reginald von Lupen) in Faerie Tale Theatre's rendition of "Little Red Riding Hood" (his wife at that time, Mary Steenburgen, played Little Red Riding Hood). In 1984, he narrated the documentary The Compleat Beatles. He is known in Star Trek circles as "the man who killed Captain Kirk", appearing in the film Star Trek Generations (1994) in which he played the mad scientist Dr. Tolian Soran, and several overzealous Star Trek fans even issued death threats for this.[12] McDowell appeared in several computer games, most notably as Admiral Geoffrey Tolwyn in the Wing Commander series of computer games. His appearance in Wing Commander III marked the series transition from 2D pre-rendered cutscenes to live-action cutscenes. His appearance in Wing Commander IV was during the final days of video game live action cutscenes.

McDowell as Alex DeLarge in the classic A Clockwork Orange (1971)

In 1995, he co-starred with actress and artist Lori Petty in the science fiction/action comedy film Tank Girl. Here, he played the villain Dr. Kesslee, the evil director of the global Water and Power Company, whose main goal in the story was to control the planet's entire water supply on a future desert-like, post-apocalyptic Earth.

McDowell appeared in an episode of the animated series South Park, which provided a comedic retelling of the Charles Dickens novel Great Expectations. In the episode, McDowell played the real-life narrator of the story in live action, introducing himself simply as "a British person", in a parody of Masterpiece Theatre, and its ex-host, Alistair Cooke.[13]

McDowell played himself in Robert Altman's The Player, in which he chastises protagonist Griffin Mill (Tim Robbins) for badmouthing him behind his back. He worked with Altman once again for The Company (2003) as "Mr. A.", the fictional director of the Joffrey Ballet of Chicago. His character was based on real-life director Gerald Arpino. McDowell had a brief but memorable role as the psychopathic Gangster in the British crime film Gangster No. 1 (2000). In the film I'll Sleep When I'm Dead (2003), he played a straight married man who rapes a young drug dealer to "teach him a lesson". The film also starred Clive Owen as the victim's elder brother.

McDowell at "The Genius of Stanley Kubrick" at the 2006 Traverse City Film Festival.

In 2006, McDowell portrayed radio mogul Jonas Slaughter on Law & Order: Criminal Intent. The following year, he portrayed the villainous Mr. Linderman on the first season of the NBC series Heroes, a role he reprised in the third-season premiere. He starred in Jerry Was a Man, which appeared as an episode of Masters of Science Fiction on Sky.[14] He portrayed Terrence McQuewick on Entourage, and he made a Special Guest Appearance as the icy fashion designer Julian Hodge in the Monk season 4 episode, "Mr. Monk Goes to a Fashion Show". Never Apologize is a 2007 documentary film of Malcolm McDowell's one-man show about his experiences working with film director Lindsay Anderson.[15][16]

McDowell appeared as Dr. Samuel Loomis in Rob Zombie's remakes of Halloween and Halloween II (in 2007 and 2009, respectively).[17] Although the films were not well received critically, they performed better at the box office and McDowell was widely praised for his performances and for being perfectly cast.[18][19] He also played Desmond LaRochette in Robert Whitlow's The List (2007), and Irish patriarch Enda Doyle in Red Roses and Petrol (2003).[20] His next film is the Canadian vampire comedy rock and roll film Suck (2009) with actor/director Rob Stefaniuk and the upcoming Alex Wright film Two Wolves.[21] In December 2009, he made an appearance in the music video "Snuff" by the heavy metal band Slipknot.[22] He appears, uncredited, as the curator Lombardi, in the film The Book of Eli (2010). McDowell portrayed Satan in the Christian comedy thriller film Suing the Devil (2011).[23]

In 2011, McDowell was cast in the role of Stanton Infeld on the TNT original series Franklin & Bash, and appeared in the Academy Award-winning film The Artist. In 2012, McDowell appeared in the horror films Vamps and Silent Hill: Revelation. On 16 March 2012, he received a star on the Hollywood Walk of Fame, aptly outside the Pig n' Whistle British pub on Hollywood Boulevard. His fellow British actor Gary Oldman was in attendance and paid tribute to McDowell for inspiring him to become an actor.[5]

In 2013, he appeared as the title character in the psychological thriller The Employer, for which he won Best Actor at the Los Angeles Movie Awards.[24] In 2013, McDowell also ventured into the Steampunk genre, starring in the short film Cowboys & Engines alongside Richard Hatch and Walter Koenig. In 2013, he starred as King Henry II in the film Richard the Lionheart, with Gregory Chandler as the title character. He portrayed Father Murder in the 2016 Rob Zombie film 31.[25][26] McDowell also plays Boogeyman in Abnormal Attraction co-starring Gilbert Gottfried, Bruce Davison, Tyler Mane and Leslie Easterbrook.[citation needed]

McDowell was the featured narrator in the documentary, The Compleat Beatles released in 1982. He has voiced Lord Maliss in Happily Ever After (1993), the Superman villain Metallo in Superman: The Animated Series, Mad Mod on Teen Titans, Merlyn in DC Showcase: Green Arrow, (2010) Arkady Duvall (son of Ra's al Ghul) on Batman: The Animated Series and as the voice of a Death Star commander on a Robot Chicken episode parodying Star Wars. He is also a regular on the second season of the Adult Swim cartoon Metalocalypse as Vater Orlaag and other characters. McDowell also voiced Dr. Calico in Disney's Bolt (2008) and the henchman Reeses II in the animated series Captain Simian & the Space Monkeys, a show laced with references to many movies including his own role in A Clockwork Orange.[citation needed]

In 2006-07, he contributed spoken word to two Pink Floyd tribute albums produced by Billy Sherwood: Back Against the Wall and Return to the Dark Side of the Moon. He has also provided voice-over work for Borgore on his album #NEWGOREORDER (2014). In 2008, McDowell began a recurring role as Grandpa Fletcher on Phineas and Ferb. He also narrated the award-winning documentary Blue Gold: World Water Wars.[citation needed]

McDowell reprised his role of Metallo in the video game Superman: Shadow of Apokolips and an episode of Justice League Unlimited. He also provided his voice for the character President John Henry Eden in the video game Fallout 3, Rupert Pelham in the game WET, King Solomon in the Word of Promise Audio Bible, and the CEO of Stahl Arms in Killzone 3, Jorhan Stahl.[27] He also voiced Daedalus in God of War III. He is the voice for the primary antagonist Molag Bal in the MMO The Elder Scrolls Online. He is also the voice of Dr. Monty in Call of Duty: Black Ops III.[citation needed]

McDowell is the host of Fangoria's Dreadtime Stories, a monthly series of radio dramas with a mystery, horror, science fiction and dark humour theme. Each month, a new episode is available for download, and scripts, as used by McDowell and the supporting actors, are also available at the Fangoria website.[citation needed]

McDowell's first wife (1975-80) was actress and publicist Margot Bennett. His second wife (1980-90) was actress Mary Steenburgen, whom he met while filming Time After Time. They had two children together: Lilly Amanda (born 21 January 1981) and Charles Malcolm (born 10 July 1983). They divorced in 1990.[citation needed]

His third wife (1991-present) is Kelley Kuhr, 24 years his junior, with whom he has three sons: Beckett Taylor (born 29 January 2004), Finnian Anderson (born 23 December 2006) and Seamus Hudson (born 7 January 2009). He is the maternal uncle of actor Alexander Siddig. He and his nephew both appeared in the film Doomsday (2008) by director Neil Marshall. The McDowells live in Ojai, California. He became a grandfather in January 2012 when daughter Lilly McDowell Walton gave birth to a girl, Clementine Mae.[citation needed]