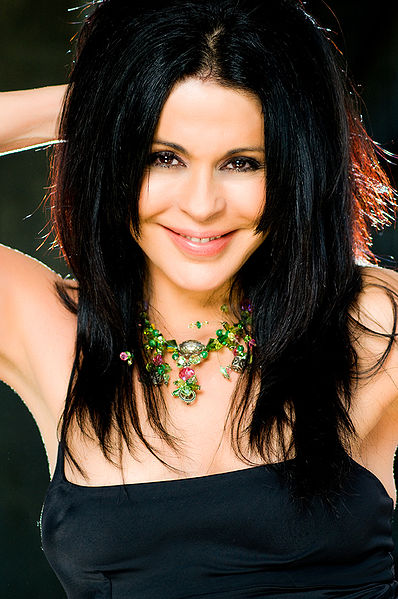 María Conchita Alonso was born María Concepción Alonso Bustillo in Cienfuegos, Cuba. Her family moved to Venezuela when she was five years old, in 1962, after the Cuban Revolution. She had her first experience in show business when she was crowned Miss Teenager World in 1971, and was Miss World/Venezuela in 1975 where she became sixth runner-up in the Miss World pageant won by Puerto Rico's Wilnelia Merced.[citation needed]
Read more...

Alonso's first gold album and number one song in the charts was Love Maniac in 1979, her name as a singer back then was A'mbar, after that followed her second number 1 with "The Witch" and soon after "Dangerous Rhythm". In what is generally considered to be her best known song, she was asked by Giorgio Moroder to write the lyrics in Spanish and sing "Vamos a Bailar" which he had written to be part of the soundtrack for the film Scarface. The song instantly became a classic amongst Spanish speakers despite failing to garner any major attention outside of Cuba where it was recorded. As her two albums with Ambar and her solo debut were recorded in English, it was her second album María Conchita from 1984 that made her a singing star in the Spanish-speaking market, receiving a Grammy Award nomination for "Best Latin Performance".[2]

She was one of the few Latin-born actresses to star in a Broadway show in 1995, playing Aurora in Kiss of the Spider Woman. She later acted in romantic comedies like Chasing Papi (2003) and The Last Guy on Earth (2006).

Alonso was cast to play Lucía, the mother of Gabrielle Solis, on the ABC series Desperate Housewives. The episode was aired on February 19, 2006. She was in the Latin version Amas de Casa Desesperadas for Univision Network. She was a guest star in the live-action film of the comic book El Muerto and appeared in the film Material Girls (2006).

Alonso hosted VH1's ¡Viva Hollywood! on April 13, 2008 with Carlos Ponce. She portrayed Sam in the Werewolf horror film Wolf Moon, which was directed by Dana Mennie.[3]

Alonso has often spoken in support of LGBT rights and in appreciation to her LGBT fans, stating that "I was very much supported by the community when I first came out with my music". In a 2004, she compared herself to Cher in terms of her connection to LGBT culture.[4]

Alonso issued an "Open Letter to Sean Penn"[7] online on March 29, 2010 regarding his support of Hugo Chávez. She used a point-by-point refrain of "WHY" in her letter questioning various issues occurring in Venezuela.[8] In December 2011, she got into a heated exchange with Penn at a Los Angeles airport during which Penn called her a pig and she responded by calling Penn a communist (both played lovers in the 1988 movie Colors).[9]

In the fall of 2008, Alonso endorsed the presidential campaign of Republican nominee John McCain, writing:[10]

As a Latina and a new American citizen, I believe in this country and its people, and I believe that we need more than just "change." We need a leader who can bring about the right kind of change, and John McCain has the experience and judgment necessary to lead us in these uncertain times. I grew up in Cuba and Venezuela, and I am appalled that Barack Obama apparently wants to emulate the "spread the wealth" economic policies of those countries and negotiate with their leaders.

In an August 2012 Spreecast interview, Alonso stated her opposition to Obama's re-election, saying that if reelected he would take steps to make the United States become more like Venezuela under the Chávez government.[11]

In January 2014, Alonso resigned from a San Francisco production of The Vagina Monologues after appearing in an advertisement for Republican candidate for Governor Tim Donnelly.[12]

On September 17, 2014, Venezuelan President Nicolás Maduro asked Interior Minister Miguel Rodriguez Torres to pursue on court legal actions to revoke Alonso's Venezuelan citizenship.[13] The reason was her public request on a radio interview for a military intervention against Venezuela: "In my opinion, (the US) must intervene, because the Cubans already invaded without firing a single bullet because they gave it (Venezuela) for free. So I would like that the US would invade using bullets to get all those communists out of Venezuela"[14]