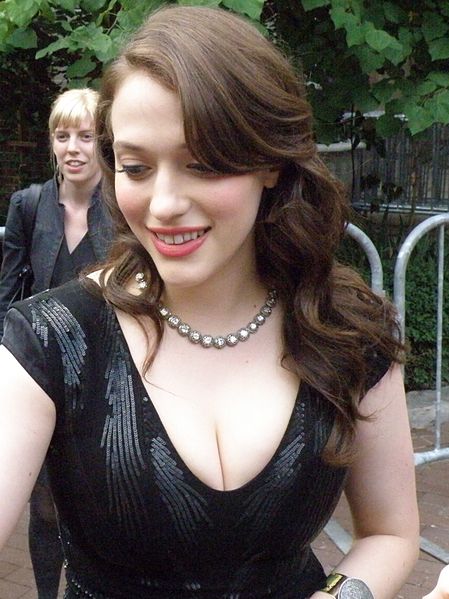 Katherine Victoria Litwack was born on June 13, 1986 in Bryn Mawr, Pennsylvania.[1][2][3] Her mother, Ellen Judith Litwack, is a poet and speech therapist,[4][5] and her father, Gerald J. Litwack, is a molecular pharmacologist, and college professor and chairman. Dennings is the youngest of five children, including an older brother, Geoffrey S. Litwack.[1][6] Her family is Jewish.[6][7][8][9]

Dennings was homeschooled; her only enrollment at a traditional school was for a half-day at Friends' Central School.[1] She graduated from high school early, at the age of 14.[10] She moved with her family to Los Angeles, so that she could pursue acting full time. She adopted the surname "Dennings" as her professional name when she was younger.[3]

Dennings began her career in commercials at the age of 10.[1] Her first acting job was an ad for potato chips.[10] Dennings made her professional debut with an appearance on HBO's Sex and the City in 2000, in the episode "Hot Child in the City", playing an obnoxious 13-year-old who hires Samantha to handle publicity for her bat mitzvah.[3][11] She then starred on the short-lived WB sitcom Raising Dad from 2001 to 2002 as Sarah, a 15-year-old raised by her widowed father (Bob Saget), with a pre-teen sister (Brie Larson). In 2002, Dennings appeared in the Disney Channel film The Scream Team as a teenager who stumbles into a group of ghosts. She was cast for a five-episode run on The WB's Everwood, but the role was recast with Nora Zehetner.[12]

Dennings continued working on television, guest-starring on Without a Trace as a teen whose boyfriend goes missing, and on Less than Perfect in 2003. In February 2004, she was cast in a pilot for CBS titled Sudbury, about a family of modern-day witches, based on the 1998 film Practical Magic, but the series was not picked up.[13][14] Dennings had a recurring role on ER from 2005 to 2006 as Zoe Butler, and guest-starred in the CSI franchise twice: first on CSI itself, as Missy Wilson, in the 2004 episode "Early Rollout". Then, on CSI: NY as Sarah Endecott, in the 2005 episode "Manhattan Manhunt".

Dennings made her feature film debut in Hilary Duff's Raise Your Voice in 2004 as Sloane, a somber piano student.[15] In 2005, she landed supporting roles in The 40-Year-Old Virgin as Catherine Keener's character's daughter, and in Down in the Valley.[10] She played a rebellious teenager in the 2006 film Big Momma's House 2, starring Martin Lawrence.[16]

Dennings starred in Charlie Bartlett in 2008, the story of a wealthy teenager (Anton Yelchin) who acts as a psychiatrist for his new public high school. She played Susan Gardner, Bartlett's love interest, and the daughter of the school's principal (Robert Downey, Jr.).[17] Dennings appeared in The House Bunny that year, as Mona, a pierced feminist sorority girl.[18] She also starred in the teen romance Nick and Norah's Infinite Playlist, with Michael Cera. Dennings played Norah Silverberg, the daughter of a famous record producer, and was nominated for the International Press Academy's Satellite Award for Best Actress for the performance.[19]

In September 2008, Dennings hoped to make Don DeLillo's novel End Zone into a film. Actors Sam Rockwell and Josh Hartnett were involved, but the project was not greenlit because of its controversial subject matter of nuclear war.[20]

In 2009, Dennings appeared in The Answer Man, a story about a celebrity author whose manifestos become a sort of new Bible. She also co-starred in the Robert Rodriguez-directed dark children's film Shorts that year.[21] She played the protagonist Toe (Jimmy Bennett)'s teenage older sister, Stacey Thompson.[22] Dennings and other rising stars were featured in the August 2009 issue of Vanity Fair, re-enacting scenes from famous Depression-era films, hers being Sydney Pollack's They Shoot Horses, Don't They? (1969).[23]

Dennings was subsequently cast in the romantic comedy film Liars (A to E).[24] However, the Richard Linklater-directed project was cancelled due to cut backs at Miramax Films by the studio's parent company, Disney.[25] Dennings appeared in the superhero film Defendor in 2009, starring Woody Harrelson and Sandra Oh, playing a crack-addicted prostitute.[26][27]

The following year, she starred in the independent feature Daydream Nation as a girl who moves from the city to a strange rural town, and is caught in a love triangle with her high school teacher (Josh Lucas) and a teenage drug dealer (Reece Thompson).[28] The film began shooting in Vancouver in early 2010, and was written and directed by Michael Golbach.[29] In May 2010, Dennings appeared in a music video for "40 Dogs (Like Romeo and Juliet)", a single by Austin, Texas-based musician Bob Schneider. Robert Rodriguez directed the video, which was filmed in various locations around Austin.[30]

Dennings was part of the cast of the Marvel Studios film Thor, released in May 2011, and directed by Kenneth Branagh. She played Darcy Lewis, a tech-savvy, shy sidekick and assistant to Natalie Portman's character, Jane Foster.[31] The film went into production in January 2010, and was shot in New Mexico for six weeks in early 2010.[28]

In February 2011, Dennings was cast in 2 Broke Girls, a CBS sitcom written and produced by Michael Patrick King and comedian Whitney Cummings.[32] The series debuted on September 19, 2011 and follows the lives of two underemployed girls. Beth Behrs co-stars as a Manhattan heiress who lost her inheritance, while Dennings plays a tough outspoken girl from Brooklyn.[33] Dennings liked the idea of reaching a wider audience with her work, so she accepted the role on the network sitcom.[34] On May 12, 2017, CBS canceled the series after six seasons.[35]

Dennings starred in the drama film To Write Love on Her Arms (originally titled Renee) in 2012, with Chad Michael Murray and Rupert Friend. She played Renee Yohe, a Florida teenager who struggled with substance abuse and self-injury, and who inspired the founding of the nonprofit organization To Write Love on Her Arms. The film began production in Orlando, Florida, in February 2011.[36] In mid-2012, Dennings filmed the independent feature Suburban Gothic, playing a small-town bartender.[37]

Dennings introduced The Black Keys at the 55th Grammy Awards on February 10, 2013.[38] She appeared in a music video for the Hanson single "Get the Girl Back", alongside Nikki Reed. The actresses are close friends and are both fans of the pop group.[39] The video premiered on April 4, 2013.[40] In 2013, Dennings reprised her role as Darcy Lewis in Thor: The Dark World.[41] She worked on the film and 2 Broke Girls at the same time, flying to London to film for six months between breaks on her CBS sitcom.[42]

Dennings blogged from January 2001 until February 20, 2010, on her website and also transitioned into video blogging on YouTube.[21] Dennings stated to The Jewish Journal of Greater Los Angeles that Judaism "is an important part of my history, but, as a whole, religion is not a part of my life." The article went on to say that she considers herself more ethnically and culturally affiliated than religiously so.[6]

In December 2008, Dennings told BlackBook magazine, "I don't drink and I don't smoke and I don't like being around people who do."[43] In 2013, The New York Times reported that Dennings practices Transcendental Meditation.[44]