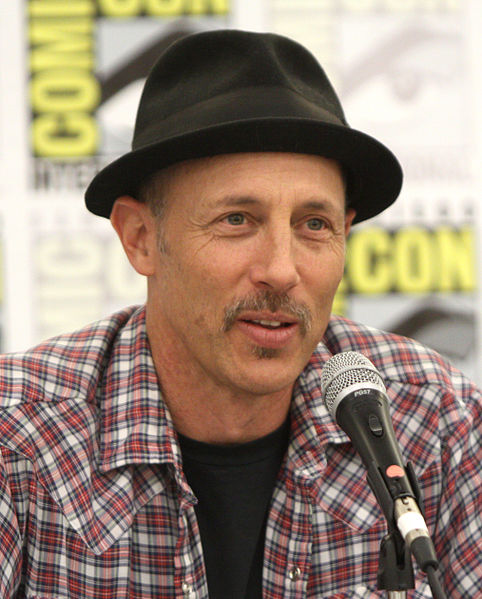 Jonathan Francis Gries (born June 17, 1957) is an American actor, writer, and director. He is also credited under the names Jon Francis and Jonathan Gries. He is best known for his role in Napoleon Dynamite as Uncle Rico, and also as recurring character Roger Linus on Lost. He is also known for his roles in Martin, The Pretender, The Monster Squad, Running Scared, and Dream Corp, LLC.

Gries was born in Glendale, California, the son of Mary Eleanor Munday, an actress, and Thomas Stephen Gries, a writer, director, and producer.[1][2][3] His first film role came at the age of 11, when he played the Boy Horace in the Charlton Heston film Will Penny, which was written and directed by his father. Some of his signature roles have come in cult classics. He played Lazlo Hollyfeld in Real Genius (1985), Azzolini in Rainbow Drive, Shawn McDermott in the TV series Martin (1992-1994), Ronnie Wingate in Get Shorty (1995), Harvey in The Rundown, and Uncle Rico in Napoleon Dynamite (2004). Gries has played a werewolf on several occasions, such as Fright Night Part 2 and The Monster Squad. In the historical Western film September Dawn, he played executed murderer John D. Lee, in a performance praised by critics who otherwise panned the film.[4] [5][6] He played Casey in the films Taken (2008), Taken 2 (2012), and Taken 3 (2014), and was also in TerrorVision, as O.D. He also lent his voice for the video game Hitman: Absolution.

Among his television roles are that of a terrorist in season two of the hit show 24 and as Broots on the NBC series The Pretender. He had a guest role on The X-Files in the episode "Sleepless". He played Dylan McKay's drug dealer in season 5 of Beverly Hills, 90210. He played Ben Linus' father Roger in a recurring role on the TV series Lost. He played Shawn on the Fox sitcom Martin during the first two seasons. He appeared twice in the TV series Quantum Leap. First, as a bookie in the episode "The Right Hand of God" and as a band member in the episode "Glitter Rock". He appeared as Rusty the Bum in two episodes of Seinfeld. In "The Beard", when Elaine rips George's toupee off and tosses it out the window, Rusty finds it and puts it on. In "The Bookstore" Kramer and Newman start a rickshaw business powered by bums, but on its maiden run, Rusty takes off with the conveyance. In 2007 he played the menacing dad to Samaire Armstrong in Around June. In 2008, he appeared in the CSI: NY episode "The Box" as the father of that episode's victim. In 2010 Jon wrapped production on A True Story. Based on Things that Never Actually Happened. ...and Some that Did and appeared in one episode of Nikita. He also played Martin in the TV Show Supernatural in the episodes "Sam, Interrupted" (2010), "Hello, Cruel World" (2011) and "Citizen Fang" (2012). He played Bob, a former drug addict who operates a safe haven for abused Mexican women, in The Bridge. He played Strabinsky in the TV Show Psych in the episode "One, Maybe Two, Ways Out" (2010).[7]