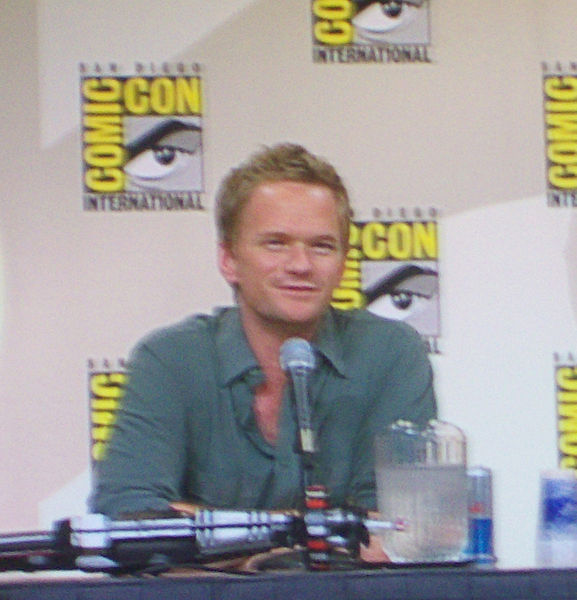 Neil Patrick Harris (born June 15, 1973)[1] is an American actor, writer, producer, comedian, magician, and singer. He is known primarily for his comedy roles on television and his dramatic and musical stage roles. On television, he is known for playing the title character on Doogie Howser, M.D. (1989-1993), Barney Stinson on How I Met Your Mother (2005-2014, for which he was nominated for four Emmy Awards), and Count Olaf in A Series of Unfortunate Events (2017-present).

Harris was named one of Time magazine's 100 Most Influential People in 2010.[4] He is married to David Burtka. In 2010, they had twins via surrogacy.

Harris was born in Albuquerque, New Mexico[1] and grew up in Ruidoso, New Mexico, with his elder brother and their parents, Sheila Gail (née Scott; born 1946) and Ronald Gene Harris (born 1946). His parents were lawyers and also ran a restaurant.[5][6][7][8][9] He attended La Cueva High School in Albuquerque, graduating with high honors in 1991,[10] which he attributes to being privately tutored half the school year while on set.[11]
Read more...

Harris at the 2008 Comic Con in San Diego, California

Harris began his career as a child actor and was discovered by playwright Mark Medoff at a drama camp in Las Cruces, New Mexico.[12] Medoff later cast him in the 1988 drama film Clara's Heart, starring Whoopi Goldberg and based on the novel of the same name by Joseph Olshan. Clara's Heart earned Harris a Golden Globe nomination. The same year, he starred in Purple People Eater, a children's fantasy.

Harris' first film role as an adult was 1995's Animal Room, although he portrayed a teenager. His subsequent film work has included supporting roles in The Next Best Thing, Undercover Brother, and Starship Troopers. Harris plays a fictionalized, hyper-womanising, lewd version of himself in the Harold and Kumar stoner comedy films Harold & Kumar Go to White Castle, Harold & Kumar Escape from Guantanamo Bay, and A Very Harold & Kumar 3D Christmas.

In 2010, Harris provided voice acting for the role of the adult Dick Grayson (Nightwing) in the animated film Batman: Under the Red Hood and the beagle Lou in the film Cats & Dogs: The Revenge of Kitty Galore. The same year, he played the lead in the indie comedy The Best and the Brightest.[13] On March 7, 2010, he made a surprise appearance at the 82nd Academy Awards, delivering the opening musical number. He starred in the films The Smurfs (2011) and The Smurfs 2 (2013).

In 2014, Harris showed a more serious side in Gone Girl, directed by David Fincher. Harris co-starred in the film as Desi Collings, the wealthy and obsessed ex-boyfriend of Amy Dunne, played by Rosamund Pike. Harris has said: "I was pinching myself at the opportunity" to work with Fincher, he received general praise from critics for his performance, as did the film.[14]

Harris has worked on Broadway in both musical and dramatic roles. He played Tobias Ragg in the 2001 concert performances of Sweeney Todd. In 2002, he performed beside Anne Heche in Proof. In 2003, he took the role of the Emcee in Cabaret alongside Deborah Gibson and Tom Bosley. As a result of his critically acclaimed performance in Cabaret, Harris was named the top-drawing headliner in the role of the Emcee by GuestStarCasting.com, outranking fellow celebrity stars John Stamos and Alan Cumming.[16] In 2004, he performed the dual role of the Balladeer and Lee Harvey Oswald on Broadway in the musical revival of Stephen Sondheim's Assassins. He also sang the role of Charles (first played by Anthony Perkins) on the Nonesuch recording of Sondheim's Evening Primrose and portrayed Mark Cohen in the 1997 touring company of the musical Rent, a role he satirized on the January 10, 2009, episode of Saturday Night Live, which he hosted.

In 2010, Harris directed a production of the rock musical Rent at the Hollywood Bowl; he cast his Beastly co-star Vanessa Hudgens as Mimi.[17] In 2011, Harris played the lead role of Bobby in Stephen Sondheim's Company with the New York Philharmonic in concert, opposite Patti LuPone and others.[18] The same year, he directed The Expert at the Card Table at Broad Stage's Edye in Santa Monica, California.[19]

A week after hosting the Tonys, it was announced that Harris would portray the titular role in the first Broadway production of the rock musical Hedwig and the Angry Inch, which he did from March through August 2014.[23][24] Harris went on to win the 2014 Tony Award for Best Actor in a Musical.[25]

Beginning in 1989, Harris played the title role of a child prodigy doctor in Doogie Howser, M.D., for which he was nominated for a Golden Globe. After the show's four-season run ended in 1993, Harris played a number of guest roles on television series, including Murder She Wrote. From 1999 to 2000, he starred with Tony Shalhoub in the NBC sitcom Stark Raving Mad, which lasted 22 episodes. He has played lead roles in a number of made-for-television features including Snowbound: The Jim and Jennifer Stolpa Story in 1994, My Ántonia in 1995, The Christmas Wish in 1998, Joan of Arc in 1999, The Wedding Dress in 2001, and The Christmas Blessing in 2005.

From 2005 to 2014, Harris played Barney Stinson, a serial womanizer, in the CBS ensemble sitcom How I Met Your Mother. The role earned him Emmy nominations every year from 2007 to 2010.

After a preview at the San Diego Comic-Con, a musical episode of Batman: The Brave and the Bold featuring Harris as the villainous Music Meister premiered on October 23, 2009, on Cartoon Network. As a character who could make anyone do his bidding by singing, he spent most of the episode singing several original songs.[33]

In 2010, Harris filmed a pilot episode for an American adaptation of the British game show The Cube as host, though it was not picked up to series.[34]

In 2014, Harris turned down the chance to replace David Letterman as host of the Late Show on CBS, stating that he feared he would get bored of the repetition that hosting a nightly talk show would entail. He also rejected the suggestion of replacing Craig Ferguson as host of The Late Late Show on the same grounds,[35] although he claims he was never actually offered either job.[36]

On September 15, 2015, Best Time Ever with Neil Patrick Harris, a live variety series hosted by Harris on NBC, made its debut but was cancelled after an eight-episode run.[37]

On January 15, 2016, Netflix cast Harris in the television adaptation of A Series of Unfortunate Events, in which he stars as Count Olaf, the main antagonist.[38]

On March 31, 2017, NBC picked up Harris' game show titled Genius Junior, the format will test the smarts of the most brilliant children in the country. Harris will serve as host and executive producer. The series received a 10-episode order and will debut sometime in the 2017-2018 season.[39]

Harris is a fan of magic, like his character on How I Met Your Mother. His character in American Horror Story: Freak Show was also a magician. Harris' Glee character performed magic as well. He previously served as the President of the Board of Directors of Hollywood's Magic Castle.[40] Harris won the Tannen's Magic Louis Award in 2006 and hosted the 2008 World Magic Awards on October 11, 2008. Additionally, Harris and partner David Burtka were guests of honor for a Top Chef Masters episode which took place at the Magic Castle.

In 2007, Harris worked with Mike Nelson on an audio commentary for RiffTrax. The two "riffed" on the film Willy Wonka & the Chocolate Factory. Harris is a big fan of the cult TV series Nelson worked on, Mystery Science Theater 3000. Harris was interviewed for a 1992 Comedy Central special This Is MST3K hosted by Penn Jillette about the series and its fans.[41] In 2008, Harris played the title role in Joss Whedon's musical web series Dr. Horrible's Sing-Along Blog alongside Nathan Fillion and Felicia Day. The first episode of the series debuted on July 15, 2008.[42] He has also provided his voice for the Disney California Adventure Park attraction California Screamin'.[43]

In October 2014, Harris released a memoir titled Neil Patrick Harris: Choose Your Own Autobiography, which is structured like a Choose Your Own Adventure book. His autobiography spent two weeks on The New York Times Best Seller List.[45] His debut young adult novel, The Magic Misfits, was released in November 2017 and is the first in a four-book series of the same name.[46][47][48]

Harris with his now-husband David Burtka at his ceremony to receive a star on the Hollywood Walk of Fame on September 15, 2011

Harris confirmed that he is gay on November 4, 2006, by saying, "I am happy to dispel any rumors or misconceptions and am quite proud to say that I am a very content gay man living my life to the fullest and feel most fortunate to be working with wonderful people in the business I love."[49]

Harris attended the Emmy Awards in September 2007 with his fiancé David Burtka, later confirming the relationship. In an interview on The Ellen DeGeneres Show,[50] Harris said his relationship with Burtka began in 2004. On August 14, 2010, Harris announced that he and Burtka were expecting twins via a surrogate mother.[51][52] Their son, Gideon Scott, and daughter, Harper Grace, were born on October 12, 2010.[53][54]

Following the passage of the Marriage Equality Act in New York on June 24, 2011, Harris and Burtka announced their engagement via Twitter,[55] stating that they had proposed to each other five years earlier but kept the engagement secret until same-sex marriage became legal.[56] On September 8, 2014, Harris announced on his Twitter page that David Burtka and he were married over the weekend in Italy.[57][58][59][60] Pamela Fryman, the long-time director of How I Met Your Mother, officiated the wedding while Elton John performed at the reception.[61][62][63]

Harris lives in New York City in the Upper Manhattan neighborhood of Harlem.[64]

Alongside his acting career, Harris has supported and contributed to various charities, organization, and foundations. These include:[65]

In October 2014, Harris attended a dinner for the Elton John AIDS Foundation[66] and in September 2016, he and his husband were the honorary hosts of a culinary cookout to help raise money for the Alex’s Lemonade Stand Foundation.[67]

Report a problem
Write to Neil Patrick Harris at FanPal • 2022