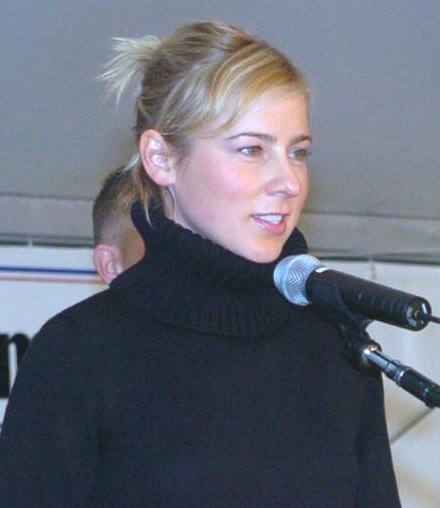 Traylor Elizabeth Howard (born June 14, 1966) is an American actress. She is known for playing Sharon Carter on the television series Two Guys and a Girl, and Natalie Teeger on the USA Network series Monk.

In 1994 Howard appeared in one of the "You Will" series of television commercials for AT&T Corporation.

Howard's most prominent roles to date include Natalie Teeger, Adrian Monk's (Tony Shalhoub) assistant on the USA Network television series Monk,[1] and Sharon Carter, the "girl" of the title of the 1998-2001 sitcom Two Guys, a Girl, and a Pizza Place (later retitled Two Guys and a Girl).

She also starred in the short-lived sitcoms Boston Common and Bram & Alice alongside actor Alfred Molina. In 1999 she appeared in the Foo Fighters' music video "Breakout". During the third season of The West Wing, Howard made a guest appearance. She was the romantic lead in the Norm Macdonald film Dirty Work.

On November 24, 2006, Howard gave birth to a son, Sabu. She was pregnant with him during season five of Monk, so she spent several episodes with boxes, newspapers, and the like in front of her abdomen to hide the pregnancy. Traylor married for the third time in 2011 to Jarel Portman, son of famed architect John C. Portman Jr.; the couple's son Julien was born in 2012.[3]