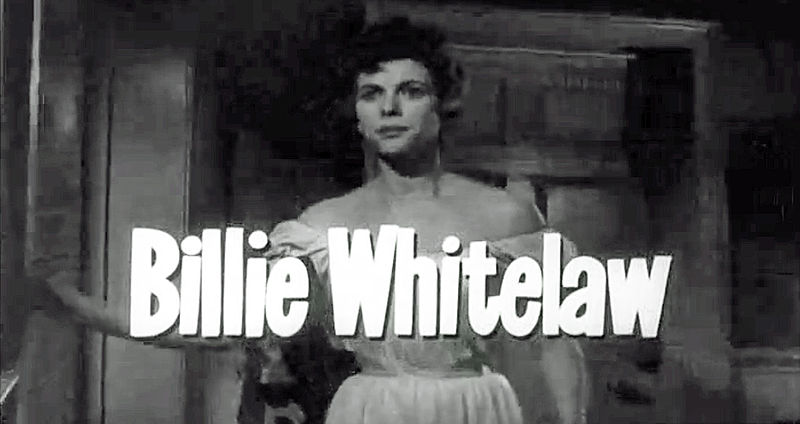 Billie Honor Whitelaw CBE (6 June 1932 - 21 December 2014) was an English actress. She worked in close collaboration with Irish playwright Samuel Beckett for 25 years and was regarded as one of the foremost interpreters of his works.[2] She was also known for her portrayal of Mrs. Baylock, the demonic nanny in the 1976 horror film The Omen.

Whitelaw was appointed a CBE in the 1991 Birthday Honours.

Whitelaw was born in Coventry, Warwickshire,[1] the daughter of Frances Mary (née Williams) and Gerry Whitelaw.[3] She had one sister, Constance, who was 10 years older. Whitelaw grew up in a working class part of Bradford and later attended Grange Girls' Grammar School in Bradford. At age 11, she began performing as a child actress on radio programmes, including the part of Bunkle, an extrovert prep-schoolboy on Children's Hour from Manchester, and later worked as an assistant stage manager and acted with the repertory company at the Prince's Theatre in Bradford during high school. Her father died of lung cancer when Billie was 9 years old. Money was tight, and her mother struggled to support the family. "It's something I haven't come to terms with ... I'm rather ashamed of having the good life I have", she later recalled.[4]
Read more...

Whitelaw trained at RADA and made her stage debut at age 18 in London 1950. She made her film debut in The Sleeping Tiger (1954), followed by roles in Carve Her Name with Pride (1958) and Hell Is a City (1960). Whitelaw soon became a regular in British films of the 1950s and early 1960s. In her early film work, she specialised in blousy blondes and secretaries, but her dramatic range began to emerge by the late 1960s. She starred with Albert Finney in Charlie Bubbles (1967), a performance which won her a BAFTA award as Best Actress in a Supporting Role. She would win her second BAFTA as the sensuous mother of college student Hayley Mills in the psychological study Twisted Nerve (1969). She continued in film roles including Leo the Last (1970), Start the Revolution Without Me (1970), Gumshoe (1971) and the Alfred Hitchcock thriller Frenzy (1972).

Whitelaw gained international acclaim for her chilling role as Mrs. Baylock, the evil guardian of the demon child Damien in The Omen (1976). Her performance was considered one of the more memorable of the film, winning her the Evening Standard British Film Award for Best Actress.[5] Other films included performing the voice of Aughra in The Dark Crystal, as the hopelessly naive Mrs. Hall in Maurice (1987), one of two sisters, with Joan Plowright, struggling to survive in war-time Liverpool in The Dressmaker (1988), the fiercely domineering and protective mother of psychopathic twin murderers in The Krays (1990), a performance that earned her a BAFTA nomination, as the nurse Grace Poole in Jane Eyre (1996), and the blind laundress in Quills (2000). She returned to film, in a comedy turn, as Joyce Cooper in Hot Fuzz (2007).

In 1970, she was a member of the jury at the 20th Berlin International Film Festival.[6]

In 1963, Billie Whitelaw met Irish playwright Samuel Beckett. She and Beckett enjoyed an intense professional relationship until his death in 1989. He wrote many of his more experimental plays especially for her, referring to Whitelaw as "a perfect actress". Whitelaw became Beckett's muse, as he created, reworked and revised each play while she physically, at times to the point of total exhaustion, acted each movement.

Whitelaw remained the foremost interpreter of the man and his work. She gave lectures on the Beckettian technique, and explained, "He used me as a piece of plaster he was moulding until he got just the right shape".[7] They collaborated on Beckett plays such as Play, Eh Joe, Happy Days, Not I, Footfalls and Rockaby for both stage and screen.[2]

From 1964 to 1966, Whitelaw was a member of Britain's National Theatre Company. In 1965, she took the part of Desdemona opposite Laurence Olivier's Othello from Maggie Smith.[8]

Whitelaw was married first to the actor Peter Vaughan from 1952 to 1966 then to the writer and drama critic Robert Muller, with whom she had a son, until his death in 1998. Her autobiography Billie Whitelaw... Who He? was published by St. Martin's Press in 1996. In her later years, she lived at a nursing home in Hampstead, London,[10] where she died on 21 December 2014, aged 82.[11]