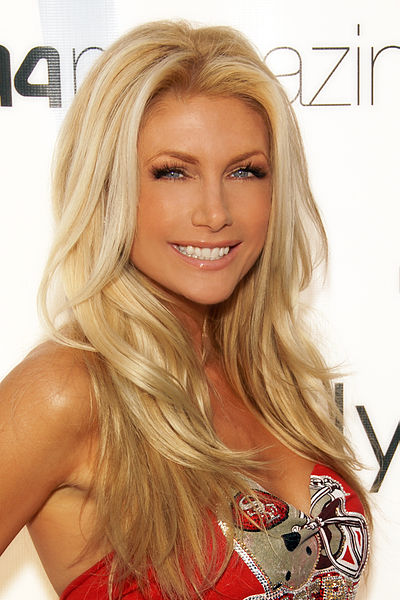 Brande Nicole Roderick (born June 13, 1974) is an American model and actress known for her appearances in Baywatch and Playboy. In April 2000, she was selected as Playmate of the Month and then became the Playmate of the Year in 2001.

In 2000, Roderick starred as Leigh Dyer in Baywatch. In April 2000, she appeared in Playboy magazine as Playmate of the Month. In 2001, Roderick became the Playmate of the Year. In 2003, she starred in the Bollywood movie Out of Control, as the American wife of an Indian man (played by Riteish Deshmukh) who, on a visit to India, gets pressured by his family into marrying an Indian girl.

Other recent film credits include Starsky & Hutch, Snoop Dogg's Hood of Horror, Club Wild Side 2 and The Nanny Diaries. In addition, she has guest-starred in Joey, The Parkers, Just Shoot Me!, Fear Factor and Beverly Hills, 90210.[2]

Roderick is a "Girl of RPS" for the USA Rock Paper Scissors League.[3] In 2006, Roderick was one of six celebrity contestants on the CBS summer series, Gameshow Marathon. She was the runner-up to Kathy Najimy. In 2009, she appeared in the second season of Celebrity Apprentice.[4] Throughout the season, each celebrity raised money for a charity of his or her choice; Roderick selected the California Police Youth Charities.[5] On the second to last episode of Celebrity Apprentice 2, she was eliminated along with fellow contestant Jesse James from the final four.[2]

In April 2009, Roderick served as host of the Playboy Shootout reality competition on Playboy TV.[6]

In February 2012, Roderick hosted the Aces & Angels Super Bowl XLVI Party in Indianapolis, Indiana alongside Leeann Tweeden and Elaine Alden. In 2013 she returned in Celebrity Apprentice 6 All-Star, with Claudia Jordan and Dennis Rodman of season 2.

As of 2008, Roderick had a networking company named Financially Hung.[7][8] She described the company as being "like MySpace for adults."[9]

Roderick was born in Novato, California, and attended Santa Rosa Junior College.[1][10] She dated the late Playboy founder Hugh Hefner from 2000 to 2001 and was also romantically linked to former NFL quarterback Cade McNown.[11][12] In August 2006, she became engaged to Glenn Cadrez, a former NFL linebacker who played 11 seasons for the Denver Broncos, the New York Jets and the Kansas City Chiefs.[13] The couple married in June 2007, and had their first child in March 2010.[14]