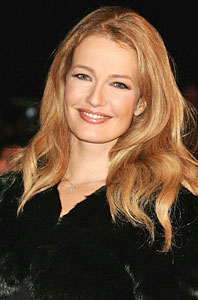 Karen Mulder (born 1 June 1970) is a Dutch model and singer. During the 1990s, she was considered a supermodel. In the early 2000s she experienced mental health problems but subsequently returned to music and modelling.

Born in 1970,[1] Mulder was raised in Den Haag and Voorburg, Mulder's father, Ben Mulder, is a tax inspector and her mother, Marijke (nee de Jong), is a secretary. Mulder has a younger sister, Saskia, who became an actress after a stint studying economics. Mulder enjoyed swimming, singing, and sailing as a child.[2] In 1985, her family went on a camping trip in the south of France. She saw an ad for Elite Model Management's "Look of the Year" contest in a newspaper. A friend took some photographs she had of her and sent them to Elite without her knowledge. She won the preliminary contest in Amsterdam, and was sent to the finals of the contest, placing second.[2] By her second year on the runway, she was modeling for Valentino, Yves Saint Laurent, Lanvin, Christian Lacroix, Versace, and Giorgio Armani. She appeared on the cover of Vogue and before long, landed a contract for Guess in 1991,[3] when she was 21 years old. She soon appeared on the cover of British Vogue and in a Nivea advertising campaign. In 1992, Mulder signed a contract with Victoria's Secret.[2] In 1993 she appeared on the cover of Vogue twice (January and March)[2]

One of the first issues of Top Model magazine was entirely devoted to Mulder along with an entire issue of Italian Vogue. Her two appearances in the Sports Illustrated Swimsuit Issue in 1997 and 1998 and her poses for the Victoria's Secret catalogue increased Mulder's profile. In 1997 she released her own calendar.[2]

Mulder went on to share catwalks with models such as Kate Moss, Cindy Crawford, Claudia Schiffer, and Naomi Campbell. At one point in her career she was earning up to £10,000 a day. Mulder retired from modeling in 2000.

Afterwards, she tried other career paths. She branched out into acting, making her debut in the French short film A Theft, One Night in 2001. She also pursued a career in music but had limited success.

In 1988, at the age of 18, Mulder married French photographer René Bosne. By 1993, her marriage had fallen apart and they divorced. Mulder says her life changed in 1993 when she was shuttling from airport to airport with almost no time at home. She then met real estate developer Jean-Yves Le Fur in the waiting lounge of a Paris airport. They soon became engaged.

Le Fur began to manage Mulder's off-the-runway career. In 1995, he collaborated with Hasbro on a Karen Mulder doll, which spurred development of an entire line of dolls modeled on the supermodels of the time. Le Fur and Mulder also made an infomercial and video. Mulder released a beauty and fashion CD-ROM, in which she gave makeup, beauty, and exercise tips. In 1995, she bought a château in France and set up a programme to provide holidays there for underprivileged children.

On 31 October 2001, Mulder was interviewed on the France 2 show Tout le monde en parle (Everyone is Talking About It) hosted by Thierry Ardisson in front of a live studio audience. During the shows taping, Mulder claimed that various people had tried to rape her, including top executives at her former agency, Elite Model Management, and Prince Albert of Monaco.

The producers of the show did not broadcast the interview, and the recording was erased. Her father blamed her troubles on drugs.[4]

Days later, Mulder repeated her allegations, this time to a weekly magazine in an interview conducted in her Paris apartment. Within hours of the interview, her sister Saskia arrived and took her to Villa Montsouris, a psychiatric hospital specializing in such disorders as depression, anxiety, and delirium, where she stayed for five months.[5] The stay reportedly was paid for by Elite models president Gérald Marie, an old friend of hers and one of the accused.[6] (It came after the BBC caught Marie on hidden camera trying to give a 15-year-old model £300 for sex, and bragging about Elite Model Look competitors he would sleep with that year.)[7]

On 11 December 2002, after suffering for years from chronic depression, Mulder went into a coma after she overdosed on sleeping pills in an apparent suicide attempt.[4][6] She left no note. She was rushed to the American Hospital in Neuilly after neighbors found her passed out on the floor of the Paris apartment on exclusive Avenue Montaigne where she was staying with friends. Mulder's parents flew from the Netherlands to be by her side along with former fiancé Jean-Yves Le Fur. Le Fur was reportedly one of the people who found Mulder unconscious after arriving at the apartment after Mulder had not answered several of his telephone calls. She awoke from her coma the next day.[8]

In 2004, Mulder decided to re-enter the music industry. She worked with Daniel Chenevez of the Niagara group to create the self-titled CD Karen Mulder. She gave birth to a daughter, Anna, on 30 October 2006.

On 1 July 2007 she returned to the catwalk at the Dior Autumn/Winter 07/08 Couture Collection in Paris, modelling alongside Naomi Campbell, Linda Evangelista, Helena Christensen, Amber Valletta, Shalom Harlow, and Stella Tennant.

On 1 July 2009, it was reported that Mulder was arrested in Paris for threatening to attack her plastic surgeon.[9]