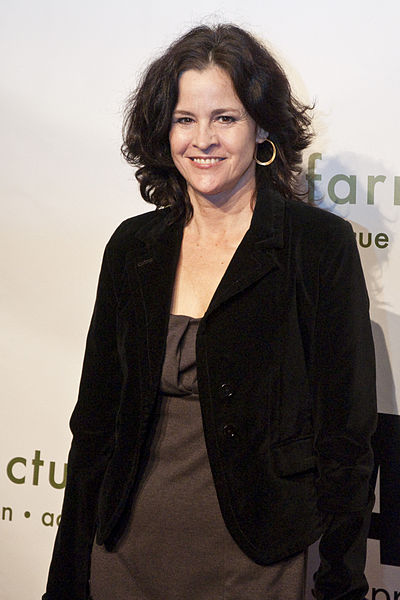 Alexandra Elizabeth Sheedy (born June 13, 1962[1]) is an American actress and author. Following her film debut in 1983's Bad Boys, she became known as one of the Brat Pack group of actors in the films The Breakfast Club (1985) and St. Elmo's Fire (1985). She also acted in WarGames (1983) and Short Circuit (1986). For her performance in Lisa Cholodenko's High Art (1998), Sheedy won the Independent Spirit Award for Best Female Lead.[2] According to IMDB, High Art was nominated for a number of awards, and won the GLAAD Media Awards 1999 Outstanding Film (Limited Release).[3]

Sheedy was born in New York City[4] and has two siblings, brother Patrick and sister Meghan. Her mother, Charlotte (née Baum), is a writer and press agent who was involved in women's and civil rights movements,[5] and her father, John J. Sheedy, Jr., is a Manhattan advertising executive.[6][7] Sheedy's mother is Jewish, whereas her father is of Irish Catholic background.[8] Her maternal grandmother was from Odessa, Ukraine.[9] Her parents divorced in 1971.[10]

Sheedy attended Columbia Grammar & Preparatory School in New York City, graduating in 1980. She started dancing with the American Ballet Theatre at age six[11] and was planning to make it a full-time career. However, she gave up dance in favor of acting full-time. At age 12 she wrote a book, She Was Nice to Mice; the book was published by McGraw-Hill Education and became a best-seller.[11][dead link] On June 19, 1975, she appeared on the game show To Tell the Truth.[12]

Sheedy started acting in local stage productions as a teenager. After appearing in several television films in 1981, as well as three episodes of the television series Hill Street Blues, she made her feature film debut in Bad Boys (1983), starring Sean Penn, where she played Penn's humiliated girlfriend. The 1980s were her most active period, with roles in popular films such as WarGames, The Breakfast Club, St. Elmo's Fire, Short Circuit, and Maid to Order.

Sheedy starred alongside Radha Mitchell in the 1998 independent film High Art, about a romance between two women and the power of art.[13] Her performance in High Art was recognized with awards from the Independent Spirit Awards, Los Angeles Film Critics Association, and National Society of Film Critics.

In 1999, Sheedy took over the lead role in the off-Broadway production of the musical Hedwig and the Angry Inch. She was the first female to play the part of the genderqueer Hedwig, but her run ended early amid "mixed" reviews, according to E! News.[14] That same year, she was cast as a lead actress in Sugar Town, an independent film, which featured an ensemble cast of actors and musicians.[15]

She was reunited with Breakfast Club co-star Anthony Michael Hall when she became a special guest star on his television show The Dead Zone, in the second-season episode "Playing God," from 2003.[16]

Sheedy has also appeared in the episode "Leapin' Lizards" of C.S.I. in which she played a woman who murdered her boyfriend's wife while mixed up in a cult. On March 3, 2008, Sheedy was introduced as the character Sarah, in the ABC Family show Kyle XY. In 2009, she played the role of Mr. Yang on the USA Network television show Psych (in the third season finale), a role that she reprised in the fourth season, fifth season, and seventh season finales.

Sheedy dated Bon Jovi guitarist Richie Sambora for less than a year in the 1980s. She stated in The Los Angeles Times that the relationship led her to abuse drugs, a claim Sambora denied.[17] In 1985, Sheedy was admitted to Hazelden Foundation and in the 1990s was treated for a sleeping pill addiction,[18] an experience which she drew on for her role as a drug-addicted photographer in High Art.[19]

On April 12, 1992, Sheedy married actor David Lansbury, the nephew of actress Angela Lansbury and son of Edgar Lansbury, the original producer of Godspell. They have had one child, who was born a female in 1994, but now identifies as a man and goes by the name Beckett.[20] Because of this, Sheedy is a strong supporter of transgender advocacy. In May 2008, Sheedy announced that she and Lansbury had filed for divorce.[4]

In January 2018, Sheedy tweeted the #MeToo hashtag along with the names of James Franco and Christian Slater, indicating that they have been sexually inappropriate with her and that Franco was the reason she chose to leave show business. She later took down the tweets. When asked by Seth Meyers, Franco stated that he did not know why Sheedy would have tweeted those accusations.[21][22]