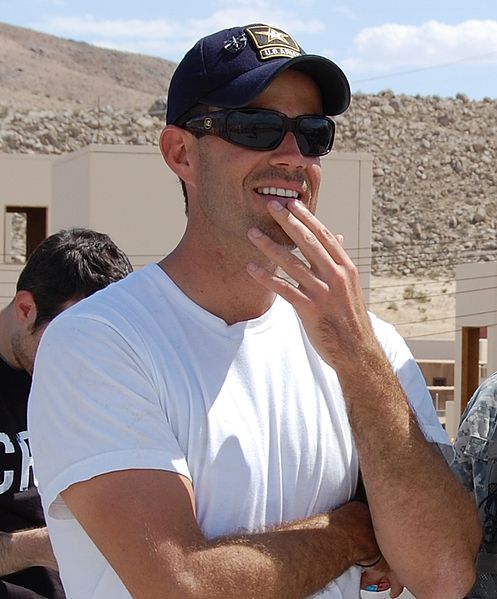 Carson Jones Daly (born June 22, 1973)[1] is an American television host, radio personality, producer, and television personality. Prior to 2002, Daly was a VJ on MTV's Total Request Live,[2] and a DJ for the Southern California-based radio station 106.7 KROQ-FM. In 2002, Daly joined NBC, where he began hosting and producing the late night talk show Last Call with Carson Daly, and occasionally hosting special event programming for NBC, such as the Macy's Fourth of July fireworks show, and executive producing New Year's Eve with Carson Daly from Times Square beginning in 2003.

Daly has since been involved in more prominent roles at NBC, such as becoming host for its reality music competition The Voice in 2011, and joining NBC's morning show Today as a social media correspondent in 2013, with his role increasing in subsequent years becoming a co-host.

Daly has also served as a radio DJ; he was formerly a nighttime host on the Los Angeles radio station KROQ-FM; beginning in 2010, Daly began hosting Mornings with Carson Daly on its sister station KAMP-FM.[3] Daly also hosts a weekly top 30 countdown show The Daly Download with Carson Daly which is produced by Entercom (formerly CBS Radio and is the parent of KAMP-FM) and syndicated though Westwood One.[4] The program airs on Saturday and Sunday mornings in a three or four hour edition on CHR/AC radio stations.

Daly was born in Santa Monica, California,[1] the son of Coachella Valley TV personality Pattie Daly Caruso, and car salesman Jim (a.k.a. J.D.) Daly.[5][6] His mother is from Fayetteville, North Carolina.[7] His father died from bladder cancer when Carson was a boy.[7]

Daly attended Santa Monica High School and was a member of the school's golf team before graduating in 1991. He attended Loyola Marymount University in Los Angeles and dropped out to pursue a pro golf career.[1] He is of Irish descent[8] and has worked with Guinness on local "Proposition 3-17" to make Saint Patrick's Day an official holiday.[8] Daly served as an intern to Jimmy Kimmel in radio at the age of 18 in Palm Springs, California.[9] He began his entertainment career at College of the Desert and found his voice with an internship at the former KCMJ FM (now KKUU) under the name "Kid Carson".[10]

Daly began his broadcasting career at the radio station KOME in San Jose, California.[11] Daly was then given the 6-10 PM time slot at KOME's sister station KROQ in Los Angeles.[11] It was during Daly's time at KROQ that MTV recruited Daly to serve as a VJ during MTV's summer beach house programming called "Motel California."[11] At the end of the summer, MTV hired Daly as a permanent VJ, a position which required Daly to relocate to New York.[11] Once in New York, Daly began hosting MTV Live.[11]

Daly hosted MTV'S TRL from 1998-2003.[12] TRL was born out of two shows, "Total Request" and "MTV Live" both hosted by Daly.[13] Daly's role as host of the popular live program included introducing the top 10 videos of the day and interviewing celebrity guests.[13]

In 2002, Last Call with Carson Daly debuted. The show was shot on the same set as Saturday Night Live until 2005 when it moved to Los Angeles.[14]

In 2011, Daly began hosting and executive-producing NBC's reality music competition The Voice. Daly's duties as host include watching blind auditions alongside contestant's family members.[16] As a producer of The Voice, Daly has won four Emmy Awards for Outstanding Reality-Competition Program, first in 2013 and again from 2015, 2016, and 2017.[17][18] When social media correspondent Christina Millian departed the show, Daly became the sole host.[19]

Carson Daly appears in a brief but pivotal role in the first episode of My Name Is Earl. While in the hospital after being hit by a car, Earl learns about karma from watching an episode of Last Call with Carson Daly where Daly claims that his success is a direct result of doing good things for other people. Earl is thus inspired by Carson Daly to turn his own life around, and sets out to make up for his many past wrongs.[20] Carson Daly also had a small role on Dave Chappelle's show Chappelle's Show.

In September 2013, Daly became the orange room anchor (social media reporter) on the Today show and also serves as a fill-in anchor for Willie Geist and the show's weekend edition (Weekend Today).

Daly is a founding partner with Jonathan Rifkind, Jonathan B. Davis and Bam Margera of an independent record label,[21] 456 Enterprise & Entertainment, which released the "Viva La Bands" compilations.

In March 2000, Tara Reid met Daly on the set of Total Request Live, and they began dating.[22] They shared an apartment in New York City and Daly proposed on October 29.[22] In June 2001, Reid and Daly broke off their engagement.[23]

Daly has opened up about his struggle with Generalized Anxiety Disorder.[29]