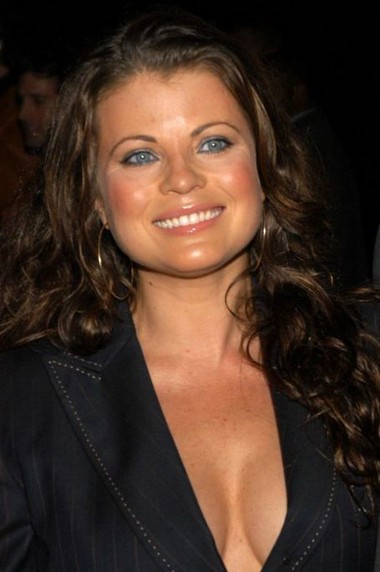 Yasmine Amanda Bleeth (born June 14, 1968) is an American former actress. Her television roles include Caroline Holden in the long-running series Baywatch, and LeeAnn Demerest on the soap opera One Life to Live.

Bleeth was born in New York City, the daughter of Carina, a model, and Philip Bleeth, a business proprietor.[1] Her father Philip is of Russian-Jewish and German-Jewish descent,[2][3] and her mother Carina was of Algerian descent.[4] Phil Bleeth was associated with a group of friends that included Arlo Guthrie and Alice Brock (of "Alice's Restaurant" fame) around the time of Yasmine's birth.[5] Yasmine's earliest known acting role was in a Johnson & Johnson's No More Tears baby shampoo television commercial at age 10 months in 1969. At the age of six, she appeared on Candid Camera. Later that year she appeared in a Max Factor cosmetic advertising campaign with model Cristina Ferrare. Her work in this campaign caught the eye of fashion photographer Francesco Scavullo, who subsequently included her and her mother in his book entitled Scavullo Women.

Total Film magazine quoted Bleeth stating: "When I was a girl I used to have to force boys to kiss me. My toughest friend had to hold them down."[6]

In 1980 12-year-old Bleeth was cast her first film role, opposite Buddy Hackett in the feature film Hey Babe! In 1983, she was in a Scope commercial with Puerto Rican group Menudo. At age 16 she began appearing on the daytime soap opera Ryan's Hope. [7][8] A few months after that show’s 1989 cancellation, Bleeth's mother, Carina Bleeth, was diagnosed with inflammatory breast cancer. She died within a year at the age of 47, after which Bleeth dealt with her grief, thus: "I stayed home, watching cooking shows, taking walks." She turned down acting offers for eight months, after which won the role of LeeAnn Demerest on the daytime soap opera One Life to Live.[8]

Bleeth's role on Baywatch brought her widespread attention. People named her one of magazine's 50 Most Beautiful People in 1995. She was one of FHM's 100 Sexiest Women in the World every year from 1996-2001, and FHM's U.S. 100 Sexiest Women every year from 2000-03. As a result of her role in Baywatch, Bleeth was offered other roles in television and film. She has been a featured actress in five series and has guest-starred in other shows. During her television career, she continued to work as a model, frequently appearing in swimwear or lingerie. She once had her own line of swimwear called Yaz Wear.

Bleeth accepted a starring role in the short-lived series Titans in 2000. Aaron Spelling was so eager to cast Bleeth in the role of a vixen on Titans that his company convinced CBS to grant her an early release from her Nash Bridges contract. In an interview with Dennis Hensley, she said she delighted in her over-the-top depiction of a crazed beauty queen in the 1997 TV movie Crowned and Dangerous. She said, "I keep my crown from that film on my desk in a little Lucite box. My little brother tried it on once, and I screamed at him, 'Take it off! Take it off!' I get a little nasty about my crown."[9]

Following her first effort in a drug rehabilitation clinic in late 2000 (see below), Bleeth only shot one more performance, the 2003 television movie Baywatch: Hawaiian Wedding.

Bleeth met her future husband, strip club owner Paul Cerrito, in December 2000 when she voluntarily entered the Malibu-based Promises Rehabilitation Clinic to overcome a cocaine dependence. Bleeth would later comment, "They say you shouldn't get into any relationship in the first year of sobriety — especially with someone in the program, but Paul and I fell in love immediately."[10] They were married in Santa Barbara, California, on August 25, 2002,[11][12][13][14] and now live in Los Angeles and Scottsdale, Arizona.[15]

Bleeth was the 1998 spokesperson for the Lee National Denim Day fundraising campaign, which raises millions of dollars for breast cancer research and education. In 1998 it occurred on October 9, and was called the 'Wear Jeans to Work' campaign. Through Bleeth's help, $5 million was raised on that one day to help the Susan G. Komen Breast Cancer Foundation.[dead link][16]

Bleeth donated the proceeds of her $10,000 win on Celebrity Jeopardy! to breast cancer research. Bleeth has been a spokesperson for the Susan G. Komen Breast Cancer Foundation who, along with corporate sponsor Ford, put together the nationally run Race for the Cure.[citation needed]

In December 2000, Bleeth voluntarily entered the Malibu-based Promises Rehabilitation Clinic to overcome a cocaine dependence. On September 12, 2001, Bleeth was arrested in Romulus, Michigan, after her car pulled off the highway and wound up on a median on Interstate 94 as she and her future husband, Paul Cerrito, were heading to Detroit Metropolitan Airport. No other cars were involved.[17][18] Police found four syringes with an injectable form of cocaine in them and a small plastic bag with cocaine residue on it. The next day police conducted a search of her hotel room, and they found more cocaine and drug paraphernalia.[19] In November 2001, through a plea bargain, Bleeth pleaded guilty to possessing less than 25 grams of cocaine and to driving while impaired.[20] She was sentenced in January 2002 to two years of probation and 100 hours of community service. Bleeth's lawyer, Jerry Sabbota, stated after sentencing that the actress was satisfied with the plea bargain, noting that her record will be cleared of any felonies after she fulfills the terms of her probation. "When all is said and done she'll have a traffic ticket on her record. She wasn't treated any better than anyone else, and she wasn't treated any worse," Sabbota said.[21] Her attorney stated that Bleeth was receiving therapy from the founder of the Promises Rehabilitation Clinic that she had previously attended in 2000.[20] Bleeth completely fulfilled the terms of her probation as of January 2004, and her record was cleared as determined by the plea bargain.[citation needed] In an issue of Glamour from April 2003, Bleeth wrote a three-page article entitled "Back From my Drugs Hell" about her rocky path to recovery, her cocaine addiction, and her struggle to remain sober. Bleeth wrote that her cocaine habit was so severe that she collapsed at a photo shoot for Glamour, and she went without sleep for five days at a time. She wrote that "consciously trying to stay off drugs is now part of my life and always will be."[22]