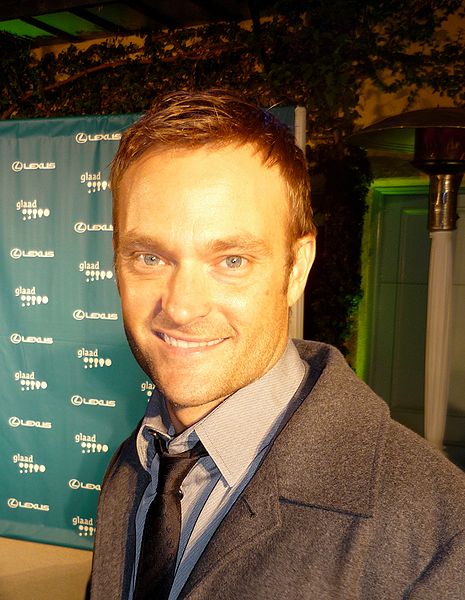 Chad Allen (born June 5, 1974) is a retired American actor. Beginning his career at the age of seven, Allen is a three-time Young Artist Award winner and GLAAD Media Award honoree. He was a teen idol during the late 1980s as David Witherspoon on the NBC family drama Our House and as Zach Nichols on the NBC sitcom My Two Dads before transitioning to an adult career as Matthew Cooper on the CBS western drama Dr. Quinn: Medicine Woman. He announced his retirement from acting in April 2015.

Allen was born Chad Allen Lazzari in Cerritos, California, and grew up in Artesia. He has a twin sister named Charity and a brother named Steve Lazzari who works for Union Pacific Railroad. Allen is of predominantly Italian origin, with a "dose" of German origin. He was raised within a "strict" Roman Catholic household and regards himself as being a "deeply spiritual person" because of his upbringing. Allen attended St. John Bosco High School in Bellflower, California.

Allen guest-starred on several prime time series including an early episode of Airwolf for which he was nominated as 'Best Young Actor: Guest in a Series' at the 6th Youth in Film Awards and St. Elsewhere, in which he played autistic child Tommy Westphall (1983-88). The series final episode, "The Last One", ends with the indication that all of its storylines occurred in Tommy's imagination. In 1983, he appeared on Cutter to Houston, playing "a kid who got hurt and had to be given mouth-to-mouth and carried to the waiting chopper by Dr. Hal Wexler (Alec Baldwin)". "I thought it was the greatest job I had ever gotten," he later stated. Allen's first regular role was as David Witherspoon on Our House (1986-88). In 1989-90, he had a recurring role as Zach in My Two Dads. Allen's next contract role was Matthew Cooper in Dr. Quinn, Medicine Woman alongside Jane Seymour (1993-98).

In 1996, at age 21, Allen was outed as gay when the U.S. tabloid The Globe published photos of him kissing another man in a hot tub at a party. The photos were sold by someone who claimed to be a friend of the couple. Allen has since become an activist for the LGBT community in addition to his continuing acting and producing career. On January 17, 2006, Allen appeared on CNN's Larry King Live with San Francisco mayor Gavin Newsom to represent his viewpoint in a debate over same-sex marriage. Allen thanked Newsom for his attempts to legalize same-sex marriage in the city. Allen has been featured in The Advocate magazine multiple times and has appeared on three of its covers.

Starting with Third Man Out (2005), Allen stars as Donald Strachey, a gay private detective in a monogamous relationship, in a series of television movies for the here! network based on novels by Richard Stevenson. The sequel, Shock to the System (2006), was followed by On the Other Hand, Death (2008) and Ice Blues (2008). Allen noted that Strachey is the first gay character he had ever played outside of theater and that, though his career is "different" since coming out, he finds it "more interesting and fun for me than it has ever been."

When Allen was cast as real-life Christian missionary Nate Saint in the docudrama End of the Spear (2006) some conservative Christians lashed out at producers for casting an openly gay man in the role.

In 2007, Allen starred in the film Save Me. Developed and produced by Allen, the film was directed by Robert Cary and written by Robert Desiderio. Save Me, a film exploring the ex-gay movement, premiered at the 2007 Sundance Film Festival and was later picked up for distribution by independent studio Fine Line Features.

From June through August 2008, Allen appeared with Valerie Harper in Looped, a play based on the life of Tallulah Bankhead, at the Pasadena Playhouse in Pasadena, California.

In November 2006, The Los Angeles Daily News wrote in passing that Allen's partner, Jeremy Glazer, was also in the film Save Me. In a September 2008 interview with Out.com, Allen stated that he was currently in a three-year relationship and had been sober for eight years. In October 2008, AfterElton.com stated his boyfriend to be Glazer. In May 2009, Allen was the recipient of a GLAAD Media Award: the Davidson/Valentini Award. In his acceptance speech he said he had met Glazer, his partner, exactly four years earlier. They broke up in 2015.

In April 2015, Allen announced in a video his retirement from acting, saying that he plans to become a clinical psychologist. "It's been an exciting journey...working on the shows that I got to work on over the years. I am incredibly grateful today, I have been and always will be," adding "My life has taken me on a very different trajectory and after 30-plus years as an actor, I made a decision a couple of years ago to begin letting that side of my life go and I've been focusing on my education."

Allen graduated from University of California, Los Angeles in June 2015 with a Bachelor of Arts in Psychology.