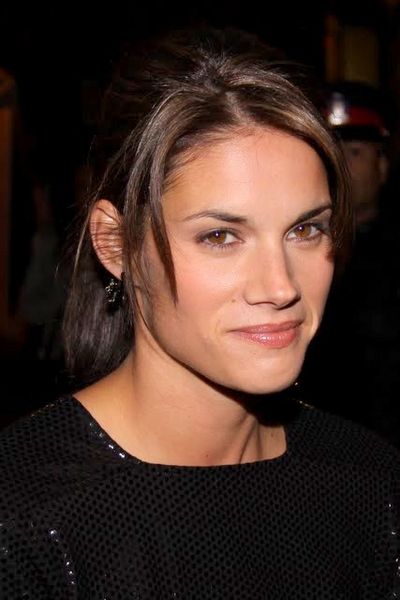 Melissa Peregrym (born June 16, 1982) is a Canadian actress and former fashion model. She is most known for her roles as Haley Graham in the 2006 film Stick It and Officer Andy McNally on the ABC and Global Television Network series Rookie Blue (2010-2015), for which she was nominated for a Canadian Screen Award in 2016.[1]

Peregrym was born in Montreal to Rev. Darrell Peregrym, a minister,[2][3] and Vanessa Peregrym, a housewife.[4] She describes herself as having been a tomboy while growing up.[5]
Read more...

At age 18, Peregrym began her professional career with the Lizbell Agency.[6] It was during her early modelling career that she was encouraged by her agency to move over to commercials.[7] Due to this shift from print to screen, she did commercials for Mercedes-Benz, Sprint Canada, and the Olympic Games.[6]

In 2000, Peregrym made her acting debut in an episode of Dark Angel, which shot in Vancouver, British Columbia. Building upon her debut role, she performed in guest star roles on The Chris Isaak Show, Black Sash, Jake 2.0, Smallville, Tru Calling, Life as We Know It, Andromeda, Heroes, and in the television film Call Me: the Rise and Fall of Heidi Fleiss.

After an uncredited cameo in 2004's superhero film Catwoman, Peregrym made her film debut in 2006, playing the lead role in Stick It, a film revolving around a rebellious teenager who is forced to return to her former life in gymnastics.

Peregrym then played the role of an illusion-generating Candice Wilmer on the television series Heroes. Billed by production staff, in promotional materials as "a female temptress".[8] She was due to appear in the episode titled Parasite, but she made her debut appearance in a non-speaking role in episode Company Man the week before.[9]

Peregrym at the 2010 Toronto Film Festival

Peregrym had her first lead television role on The CW's series Reaper from 2007 to 2009. Nikki Reed initially played the role in the unaired pilot. Reaper was about a young man named Sam who became a bounty hunter for the devil.[10]

Peregrym in 2010 then played a lead role in Canadian television series Rookie Blue in the role of police Officer Andy McNally.[11] The series aired simultaneously in North America on the Global Television Network in Canada and on ABC in the United States. The show ran for six seasons, and was canceled in 2015.[12]

In 2012, Peregrym was cast in the leading role of Chloe Jocelyn in Yahoo.com's web-based series Cybergeddon. Nine chapters were filmed and are available for viewing as of September 27, 2012. The project was supported and funded in part by Norton.[13][14] In 2013, she won a Streamy Award for her role in the web series Cybergeddon.[citation needed]

In 2014, Peregrym co-starred with Jeff Roop and Eric Balfour in the survival bear attack film Backcountry.[15]

In 2016, Peregrym was nominated for a Canadian Screen Award for her role in Rookie Blue,[1] but ultimately lost to Orphan Black's Tatiana Maslany.[16]

In 2006, Peregrym joined forces with TOMS,[20] a shoe company which also donates safe footwear for communities in South America.[21] Peregrym has spoken about her experiences in Argentina and of its impact on the communities she visited.[20]