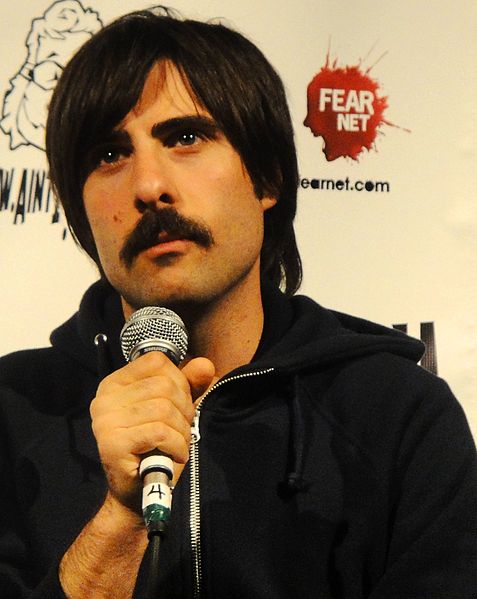 In addition to his film work, Schwartzman was the star of the HBO series Bored to Death (2009-2011), in which he played a writer who moonlights as an unlicensed private detective by advertising himself on Craigslist. He currently releases music through his solo project Coconut Records, and was formerly the drummer of rock band Phantom Planet.

Schwartzman was born in Los Angeles, California, the son of actress Talia Shire (née Coppola) and the late producer Jack Schwartzman. Schwartzman's brother is actor and musician Robert Schwartzman, and his paternal half-siblings are Stephanie and cinematographer John Schwartzman. Many other members of Schwartzman's family are involved in film: he is the nephew of Francis Ford Coppola, cousin of Nicolas Cage, Sofia Coppola, Roman Coppola, and Christopher Coppola, and grandson of Italia Coppola (née Pennino) and Carmine Coppola. His first cousin once removed, his father Jack's first cousin is novelist and screenwriter Elliott B. Oppenheim.

His paternal grandparents were Polish Jewish immigrants, while his mother is Italian American and Catholic.[1][2] He attended Windward School in West Los Angeles.[1]

Schwartzman's acting career began when he was 17 years old, when he starred in Wes Anderson's Rushmore in 1998. Prior to Rushmore, he had no acting experience. Shortly after in 2000, Jason had a guest role in the short-lived series Freaks and Geeks. In 2001, he starred in CQ, a film by his cousin Roman Coppola. In 2002, he starred in Slackers and in 2003 starred in Spun. In 2004, he starred in I Heart Huckabees, and Shopgirl in 2005. He also appeared in various television shows, such as Cracking Up. In 2006, he starred in Marie Antoinette under the direction of his cousin, Sofia Coppola, in which he appeared as King Louis XVI.

Schwartzman made a cameo appearance as Ringo Starr in the biopic spoof Walk Hard: The Dewey Cox Story. In 2009, he appeared as Mark, a C-list television star, in Funny People. He starred in the HBO show Bored to Death, in which he played a writer who moonlights as a private detective and puts himself up for hire on Craigslist. In 2009, he starred in The Marc Pease Experience. In 2010, he played Gideon Graves in the film Scott Pilgrim vs. The World, the movie adaptation of the comics by Bryan Lee O'Malley.

Prior to acting, Schwartzman was the drummer and a songwriter for the band Phantom Planet. Despite leaving the band, music remains one of his passions. He appeared in the music video for the rock remix of "It's All About the Benjamins" by Puff Daddy, and contributed to Ben Lee's 2005 album Awake Is the New Sleep. In 2007, he created the indie rock solo act Coconut Records. The first album, entitled Nighttiming, was produced by Michael Einziger and features a cover photo from Roman Coppola. The album was first released on iTunes on March 20, 2007. His second album, Davy, was released on iTunes on January 20, 2009. Schwartzman performed the musical score for Funny People and the theme song for Bored to Death.[3] He has also written tracks for Smallville and Slackers. Schwartzman also played the drums on Phoenix's rendition of The Beach Boys' song "Alone on Christmas Day" in 2015. The song was featured in Bill Murray's Netflix special, A Very Murray Christmas.

Schwartzman married long-time girlfriend Brady Cunningham at their home in the San Fernando Valley on July 11, 2009. Cunningham is an art and design director and co-owner of TENOVERSIX in Los Angeles.[4] Schwartzman describes himself as "basically a vegan" as he does not eat meat, dairy, or eggs.[5] He narrated a video, What to Eat: The Environmental Impacts of Our Food, for Farm Sanctuary.[6] He has two daughters, Marlowe Rivers (born 2010) and Una (born 2014).[7][8]

Coconut Records is an indie pop musical solo project by Schwartzman, which began in 2006.[9] The debut album, Nighttiming, was released on Schwartzman’s Young Baby Records in 2007. The album had musical contributions by members of Incubus, as well as appearances by actresses Zooey Deschanel and Kirsten Dunst and Schwartzman's brother Robert. Coconut Records' second release, Davy, was released in January, 2009.

Schwartzman's work has also been featured in many films and television programs. In 2009, he composed the theme song to his HBO series Bored to Death, in which he also starred, under his Coconut Records title. That same year, he also contributed to the film score to the film Funny People with composer Michael Andrews. The original soundtrack is downloadable, as well as available in vinyl LP, on Coconut Records' official Cinder Block store.[10] His song, "Microphone" was featured in the 2012 coming of age comedy, LOL. Schwartzman has said in various interviews during SXSW that he is currently writing new material for Coconut Records and will be recording in the next year.[citation needed]