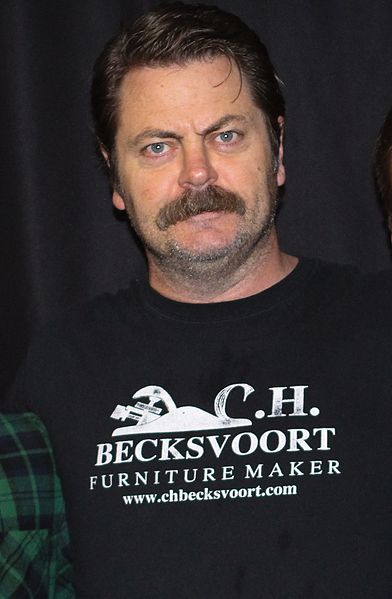 Nicholas Offerman (born June 26, 1970) is an American actor, writer, comedian, and woodworker who is known for his role as Ron Swanson in the NBC sitcom Parks and Recreation, for which he received the Television Critics Association Award for Individual Achievement in Comedy. Offerman is also known for his role in The Founder, in which he portrays Dick McDonald, one of the brothers who developed the fast food chain McDonald's. His first major television role since the end of Parks and Recreation was as Karl Weathers in the FX series Fargo, for which he received a Critics' Choice Television Award nomination for Best Supporting Actor in a Movie/Miniseries.

Offerman was born in Joliet, Illinois and grew up in Minooka, Illinois.[1] He is the son of Cathy (née Roberts), a nurse, and Ric Offerman, who taught social studies at a junior high school in nearby Channahon.[2][3] Offerman was raised Catholic.[4][5] He received a Bachelor of Fine Arts degree from the University of Illinois at Urbana-Champaign in 1993.[1] That year, he and a group of fellow students co-founded the Defiant Theatre, a Chicago-based theatre company.[1]
Read more...

Offerman lived in Chicago in the mid-1990s, where he participated with theatre companies such as Steppenwolf, Goodman, and Wisdom Bridge. At Steppenwolf, he also worked as a fight choreographer and master carpenter.[6] During this time, Offerman became acquainted with Amy Poehler, who was heavily involved with the Chicago improv comedy scene.[1]

In 2003, he married Will & Grace actress Megan Mullally and has also appeared on her talk show, The Megan Mullally Show. At the same time, he began appearing on television: as a plumber on Will & Grace during its fourth season's Thanksgiving episode, on The King of Queens, in three episodes of 24, and in an episode of The West Wing. Prior to Parks and Recreation, his most prominent role was as factory worker and Benny Lopez's love interest Randy McGee on George Lopez. He appeared twice on Gilmore Girls, in 2003's "The Festival of Living Art" and 2005's "Always a Godmother, Never a God". Offerman played would-be assassin of Wild Bill Hickok, Tom Mason, in an early episode of the HBO series Deadwood and in the third-season episode of Monk, "Mr. Monk and the Election" as a helper for the campaign of Natalie Teeger. In 2007, Offerman co-starred in the Comedy Central series American Body Shop.

Offerman with the cast of Parks and Recreation in 2012

In 2009, The Office producers Michael Schur and Greg Daniels offered Offerman a regular supporting role in their NBC sitcom Parks and Recreation: that of Ron Swanson, the deadpan, government-hating head of a city parks department and boss of Amy Poehler's character Leslie Knope.[1] Slate magazine declared Offerman "Parks and Recreation's secret weapon", and said he regularly stole scenes and "has a gift for understated physical comedy."[7] The role weaves antagonism and political philosophy with humanity, while the intense libertarian philosophy the character lives out is often played off against the equally intense liberalism and 'do-gooder' mentality of Poehler's character. Offerman said that supporting parts such as that of Parks and Recreation are his ideal roles, and that he draws particular inspiration from Reverend Jim Ignatowski, the character played by Christopher Lloyd in the sitcom Taxi.[1]

Offerman has also been featured in the Adult Swim series Childrens Hospital with Rob Corddry and Rob Huebel. He is the voice of Axe Cop in the animated series of the same name that premiered on July 27, 2013.[8] In the same year, Offerman portrayed Johnny Cool in the "Boston" episode of Derek Waters' Drunk History on Comedy Central.

Offerman has appeared in films, such as November (2004), Cursed (2005), Miss Congeniality 2: Armed and Fabulous (2005), Sin City (2005), The Men Who Stare at Goats (2009) and The Kings of Summer (2013). He also appeared in the 2006 film Wristcutters: A Love Story as a cop who attempts to arrest Shannyn Sossamon's character, Mikal. 2012 saw him in two film roles, as 21 Jump Street's Deputy Chief Hardy and in Casa de Mi Padre as DEA Agent Parker. He reprised his role as Deputy Chief Hardy in 22 Jump Street two years later. Additionally, he starred in and produced an independent film, Somebody Up There Likes Me (2012), shot in Austin, Texas. He appeared in the 2013 comedy We're the Millers, which starred Jason Sudeikis and Jennifer Aniston, and voiced MetalBeard in The Lego Movie. Offerman conceived of and starred in punk band FIDLAR's 2013 video for their song "Cocaine".[9] Offerman also played an alcoholic college guidance counselor in Believe Me (2014). Offerman played the recurring role Karl Weathers in the second season of Fargo (2015). Offerman voiced Grandpa Mike alongside wife Megan Mullally who voiced Grandma Linda in Hotel Transylvania 2 (2015). He portrayed the first establisher of McDonald's, Dick McDonald, in The Founder (2016).

In addition to acting, Offerman is also a professional boat builder and has a side business as a wood craftsman. Offerman makes furniture and other wooden structures such as canoes and boats at his woodshop.[10] He also released an instructional DVD in 2008 titled Fine Woodstrip Canoe Building with Nick Offerman, shot by Jimmy DiResta. DiResta's pay for shooting the DVD was a canoe, the second Offerman has built.[11]

Offerman has released three semi-autobiographical publications: the first, Paddle Your Own Canoe: One Man's Fundamentals for Delicious Living was released in 2013; his second, Gumption: Relighting the Torch of Freedom with America's Gutsiest Troublemakers, was released May 26, 2015; the third, Good Clean Fun: Misadventures in Sawdust at Offerman Woodshop, was released October 18, 2016.

Mullally and Offerman at the 2014 Sundance Film Festival

Offerman married actress Megan Mullally on September 20, 2003.[12] They met while acting in The Berlin Circle,[13] a play produced by the Evidence Room Theatre Company, and married after dating for 18 months. While they were dating, Offerman appeared in a guest role on Mullally's sitcom, Will & Grace, in a 2001 Thanksgiving episode. He later guest starred in a different role in a 2017 episode. Mullally later had a recurring role on Parks and Recreation as Ron Swanson's second former wife, Tammy 2. The couple have also appeared together in films such as The Kings of Summer and Smashed, as well as performing voice work together in Hotel Transylvania 2.

On whether he is a libertarian like his character Ron Swanson, Offerman has stated, "While I admire the philosophy of the libertarian mindset, I think it's proven to be ineffectual in actual governance. So no, I'm not. I'm a free-thinking American."[16]

During his time on Parks and Recreation, Offerman was able to show off his ability to play the saxophone, although he has confessed to not being able to play as well as his character, "Duke Silver", thereby suggesting that at least some of his playing may have been dubbed for broadcast. As seen on Season 1 Episode 5 of Making It, Offerman also plays the trumpet.

Report a problem
Write to Nick Offerman at FanPal • 2022