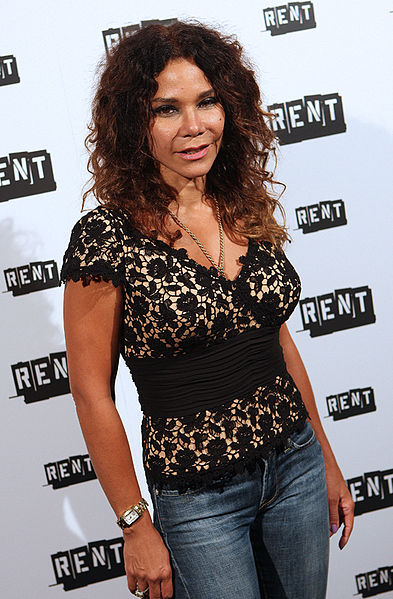 Daphne Rubin-Vega (born November 18, 1969) is a Panamanian-American dancer, singer-songwriter, and actress. She is best known for originating the roles of Mimi Marquez in the Broadway musical Rent[1] and Lucy in the Off-Broadway play Jack Goes Boating.[2]

In 2012, Daphne also appeared as Bombshell publicist Agnes in the second season of the NBC TV series Smash.

Rubin-Vega was born in Panama City, Panama, the daughter of Daphine Corina, a nurse, and José Mercedes Vega, a carpenter.[3] Her stepfather, Leonard Rubin, was a writer.[3] Daphine moved from Panama to the United States with her children when Daphne was only two years old. She died when Daphne was ten.[4] Rubin-Vega studied theater at the New Labyrinth Theater Company as well as with William Esper. She also performed with the comedy group El Barrio USA.[5][6]
Read more...

While performing with El Barrio USA, Rubin-Vega landed an audition for a new musical written and composed by Jonathan Larson. The role was for Broadway musical Rent, and the role was Mimi Marquez, a nineteen-year-old, HIV-positive heroin addict who works at the Cat Scratch Club as an exotic dancer. Before landing the role, Rubin-Vega claims that she was not a major fan of musical-theater. The struggling actress auditioned for musical director Tim Weil by singing "Roxanne" by The Police. She was then handed an original number from the production and told to learn it.[5] Rubin-Vega performed in the original workshop before the play went to Broadway. At the time, the script was vastly different from the current version. She developed the role all the way to its Broadway premiere.[7] She left the cast on April 5, 1997, and was replaced by Marcy Harriell. Rubin-Vega did not participate in the film adaptation of Rent, as she was pregnant at the time of the movie's casting and filming.[8] The role was subsequently given to Rosario Dawson. One of her castmates was Wilson Jermaine Heredia, with whom she also starred in the 1999 film Flawless.[9]

Rubin-Vega has two Tony Award nominations to her credit: one for her role in Rent as Best Actress in a Musical,[10] and the other for her performance as Conchita in Anna in the Tropics (2003), as Best Performance by a Featured Actress in a Play.[11] She won the Theatre World Award in 1996 for Rent. She was also awarded the Blockbuster Award for Best Supporting Actress in a Suspense Thriller for her role in the film Wild Things with Kevin Bacon and Neve Campbell.

She later appeared in the 2000 Broadway production of The Rocky Horror Show in the role of Magenta.[12] Rubin-Vega continued the role through the 2001 terrorist attacks in New York, and in 2005, Rubin-Vega later recounted in an interview with Fox News that the theater had gone from selling out to barely selling any tickets at all: "It went from full house to practically two people."[13] She starred with Phylicia Rashad in a musical version of Federico García Lorca's The House of Bernarda Alba at Lincoln Center in March 2006.[14] She played the role of Fantine in the 2006 Broadway revival of the popular musical Les Misérables beginning November 9.[8] On March 2, 2007, she was replaced by Filipino Tony Award winning actress Lea Salonga.

In February 2007, Daphne Rubin-Vega performed alongside Philip Seymour Hoffman in the play Jack Goes Boating off-Broadway at The Public Theater and also appeared in the film version.[15][16] Rubin-Vega appeared in a cameo role in Sex and the City, which premiered in May 2008.

In November 2010, she received the Independent Spirit Awards nomination for 2011, for her role in Jack Goes Boating. The award ceremony was held in Santa Monica, California in February 2011.[17] She starred Off-Broadway as Yvette in Tommy Nohilly's world premier of Blood From A Stone at The New Group's Acorn Theater until February 19, 2011. She appeared in the Off-Broadway cast of Love, Loss, and What I Wore from March 23 to April 24, 2011. Later that year, the feature film Union Square, co-written and directed by the Sundance Film Festival's Grand Jury Award Winner, Nancy Savoca, premiered at the Toronto International Film Festival. In it, Daphne co-starred with Mira Sorvino, Patti Lupone, Tammy Blanchard, Mike Doyle, and Michael Rispoli.[18] In spring 2012, Rubin-Vega returned to Broadway in a new revival of Tennessee Williams' A Streetcar Named Desire, playing the role of Stella Kowalski opposite Blair Underwood as Stanley. This revival was directed by Emily Mann and featured a mostly African-American cast.

In October 2016, Rubin-Vega starred in the world premiere of Miss You Like Hell, a new musical by Quiara Alegría Hudes and Erin McKeown, at the La Jolla Playhouse.[19]

She began her musical career as the lead singer for the Latin freestyle group Pajama Party, placing three songs on the Billboard Hot 100 in 1989 and 1990. As a solo artist her biggest success is on the Hot Dance Music/Club Play chart, where in 1996 she hit #1 with the song "I Found It."

She returned to the top of the dance/club play charts in 2003 with a dance version of Elton John's "Rocketman". In 2001, she recorded her debut full-length rock album of original songs, Souvenirs. The album was never officially released after Mercury Records was purchased by Seagram. After being dropped from her label, Rubin-Vega began gifting copies out to fans, encouraging them to leak it online.[20] The record later saw limited release for the charity Broadway Cares.[21]

Rubin-Vega also appears on the original cast recording of Rent and the revival recording of The Rocky Horror Show.