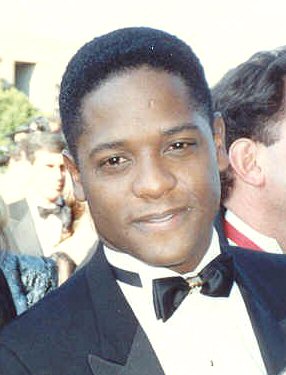 Blair Erwin Underwood[1] (born August 25, 1964) is an American television, film, and stage actor and director. He played headstrong attorney Jonathan Rollins on the NBC legal drama L.A. Law for seven years. He has received two Golden Globe Award nominations, three NAACP Image Awards and one Grammy Award. In recent years, he has appeared as Andrew Garner on Agents of S.H.I.E.L.D., The New Adventures of Old Christine, Dirty Sexy Money and In Treatment, NBC's The Event.[2], and ABC's Quantico .

Underwood was born in Tacoma, Washington, the son of Marilyn Ann Scales, an interior decorator, and Frank Eugene Underwood, Sr., a United States Army colonel.[3][4][5] Because of his father's military career, Underwood lived on bases and Army Posts in the United States and Stuttgart, Germany, during his childhood.[6] Blair attended Petersburg High School in Petersburg, Virginia. He went on to attend the Carnegie Mellon School of Drama in Pittsburgh, Pennsylvania, and is an honorary member of the Phi Beta Sigma fraternity.
Read more...

After his film debut, Krush Groove, Underwood's 1985 appearance on The Cosby Show landed him a short stint on the ABC soap opera One Life to Live as Bobby Blue, which eventually led to his performance on the TV series L.A. Law, where he appeared from 1987 to 1994. In 1996 he was featured in the July issue of Playgirl. Blair also appeared in the 1987's TV series 21 Jump Street aside a young Johnny Depp on episode "Gotta Finish the Riff."

Underwood's film career began with roles in Just Cause (1995), Set It Off (1996) and Deep Impact (1998). He also had a supporting role as a geneticist in Gattaca. In 2000, he played the lead role in the short-lived television series City of Angels. In 2003, he guest starred in four episodes[6] on the HBO series Sex and the City playing Cynthia Nixon's love interest. In 2004, he played the role of Roger De Souza opposite Heather Locklear in NBC's LAX.[7] He gained acclaim as the sexy grade school teacher in the CBS sitcom The New Adventures of Old Christine opposite Julia Louis-Dreyfus for two years. In 2007, he guest starred in an episode of the NBC series Law & Order: Special Victims Unit.[8] He played the character Alex in the first season of the HBO series In Treatment, for which he was nominated for best supporting actor at the 2009 Golden Globes.[9]

Underwood at the premiere for Earth in April 2009

Underwood has received three NAACP Image Awards, for his film work in Rules of Engagement, and his television work in L.A. Law, City of Angels, Murder in Mississippi and Mama Flora's Family. Underwood was voted one of People 's "50 Most Beautiful People" in 2000, and one of TV Guide 's "Most Influential Faces of the 90s".[10] In 2007, Underwood co-authored the novel Casanegra: A Tennyson Hardwick Novel with husband-and-wife team Steven Barnes and Tananarive Due.

In 2012, he played the lead role of Stanley in the Broadway revival of A Streetcar Named Desire.[13]

In 2013, Underwood played the role of Robert Ironside in the remake of the successful 1960s television series, Ironside, made famous by the late Raymond Burr.[14] The show was cancelled after three episodes.[15][16]

In 2016, Underwood was cast in the ABC thriller series Quantico for the series regular role of CIA Deputy Director, Owen Hall.[17]

Underwood was the featured guest of the 2018 BBCON Convention in Orlando, Florida for his humanitarian efforts, a technology focused event for social good.[18]

Underwood is a part of several charitable organizations. He won the 1993 Humanitarian Award for his work with the Los Angeles chapter of the Muscular Dystrophy Association. In 2003, along with Ashley Judd, he served as the spokesperson for YouthAIDS. In addition, he is involved with the AIDS Healthcare Foundation's Blair Underwood Clinic in Washington, DC.[19]

Underwood also appeared in a 2004 public service announcement for The Fulfillment Fund.[20] He is a Trustee for the Robey Theatre Company in Los Angeles, a non-profit theatre group founded by Danny Glover, focusing on plays about the Black experience.

He supported President Barack Obama's candidacy and spoke at campaign rallies for Obama. Underwood got to know Obama while researching his L.A. Law role at Harvard Law School, while Obama was president of the Harvard Law Review.[21]

Underwood's DNA test showed that he is a descendant of the Babungo people of Cameroon.[22] Additional DNA testing and genealogical research revealed that his African ancestry comes from the Bamum, Brong and lgbo ethnic groups of Western Africa.[23] The DNA test also connected Blair to a distant cousin in Babungo, Cameroon.[23]

On September 17, 1994, he married Desiree DaCosta, with whom he has four children, Paris, Brielle, Blake and Lexi Underwood.[24]