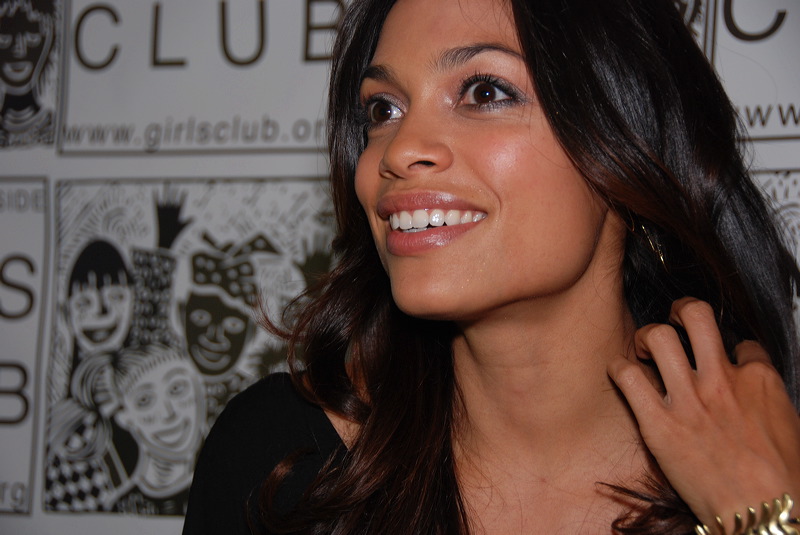 Dawson is also known for having several roles in comic book adaptations including Gail in Sin City (2005) and Sin City: A Dame to Kill For (2014), providing the voices of Diana Prince / Wonder Woman in the DC Animated Movie Universe and Barbara Gordon / Batgirl in The Lego Batman Movie, as well as her current portrayal Claire Temple in five of the Marvel/Netflix series: Daredevil, Jessica Jones, Luke Cage, Iron Fist, and The Defenders.

Dawson was born in New York City. Her mother, Isabel Celeste, is a writer and singer of Puerto Rican and Cuban ancestry. Isabel was 16 years old when Rosario was born; she never married Rosario's biological father, Patrick C. Harris.[3][4][5] When Rosario was a year old, her mother married Greg Dawson, a construction worker, who "loved and raised Rosario as his own daughter".[3] Dawson stated, "He's always been my dad."[4] Dawson has a half-brother, Clay, who is four years younger.

At the age of 21, Isabel moved the family into an abandoned building, a squat on the Lower East Side of Manhattan, where she and her husband renovated an apartment and installed the plumbing and electrical wiring for the building, creating affordable housing where Rosario and Clay would grow up. Dawson has cited this part of her history when explaining how she learned that, "If you wanted something better, you had to do it all yourself."[6][7]

Dawson at the 2009 Streamy Awards

As a child, Dawson made a brief appearance on Sesame Street. At the age of 15, she was subsequently discovered on her front-porch step by photographer Larry Clark and Harmony Korine, where Korine lauded her as being perfect for a part he had written in his screenplay that would become the controversial 1995 film Kids. She went on to star in varied roles, ranging from independent films to big budget blockbusters including Rent, He Got Game, and Men in Black II.[8][9][10][11][12]

In 1998, Dawson teamed up with Prince for the re-release of his 1980s hit "1999".[13] The new remixed version featured the actress in an introductory voice over, offering commentary on the state of the world in the year before the new millennium.[14] The following year, she appeared in The Chemical Brothers' video for the song "Out of Control" from the album Surrender.[15] She is also featured on the track "She Lives In My Lap" from the second disc of the OutKast album Speakerboxxx/The Love Below, in which she speaks the intro and a brief interlude towards the end.

In 2001, she appeared in the movie, Josie and the Pussycats as band member Valerie Brown.

Dawson at the 2011 Cannes Film Festival

Dawson starred as Naturelle Rivera, the love interest of a convicted drug dealer played by Edward Norton, in the 2002 Spike Lee film drama, 25th Hour. In the 2004 Oliver Stone film Alexander, she played the bride of Alexander the Great. In the autumn of 2005, Dawson appeared on stage as Julia in the Public Theater's "Shakespeare in the Park" revival of Two Gentlemen of Verona.[16] It was her first appearance on stage.[17]

In the film adaptation of the popular musical Rent in 2005, she played the exotic dancer Mimi Marquez, replacing Daphne Rubin-Vega, who was pregnant and unable to play the part. She also appeared in the adaptation of the graphic novel Sin City, co-directed by Robert Rodriguez and Frank Miller, portraying Gail, a prostitute-dominatrix. Also in that year, she appeared in a graphically violent scene in the Rob Zombie film The Devil's Rejects. Though the scene was cut from the final film, it is available in the deleted scenes on the DVD release.

She starred as Becky in 2006's Clerks II, and mentioned in Back to the Well, the making-of documentary, that the donkey show sequence was what made her decide to take the role. In May of the same year, Dawson, an avid comic book fan, co-created and co-wrote the comic book miniseries Occult Crimes Taskforce.[18] She was at the 2007 San Diego Comic-Con to promote the comic. She co-starred with former Rent alum Tracie Thoms in the Quentin Tarantino throwback movie Death Proof in 2007, part of the Tarantino/Robert Rodriguez double feature Grindhouse. She teamed up with friend Talia Lugacy, whom she met at the Lee Strasberg Academy, to produce and star in Descent.[19] On July 7, 2007, Dawson presented at the American leg of Live Earth.

In 2008, Dawson starred with Will Smith in Seven Pounds and in Eagle Eye, produced by Steven Spielberg. Beginning in August, she starred in Gemini Division, an online science fiction series. In the computer animated series Afterworld, she voiced the character Officer Delondre Baines.[20] On January 17, 2009, Dawson hosted Saturday Night Live. Later in the year, she voiced Artemis of Bana-Mighdall in the animated film Wonder Woman.[21]

In 2009, Dawson performed in The People Speak, a documentary feature film that uses dramatic and musical performances of the letters, diaries, and speeches of everyday Americans, based on historian Howard Zinn's A People's History of the United States.[22] In 2009, Dawson also voiced the character of Velvet Von Black in Rob Zombie's animated feature, The Haunted World of El Superbeasto. For the Kasabian album West Ryder Pauper Lunatic Asylum, she is featured singing on the track "West Ryder Silver Bullet".

In 2010, she starred in the movies Percy Jackson & the Olympians: The Lightning Thief, as Persephone, and Unstoppable, as railway yardmaster Connie. In 2013, she played Apple's mother in the independent film Gimme Shelter. The following year, she reprised her role as Gail in Sin City: A Dame to Kill For. In 2015, she played Claire Temple in the Netflix web television series Daredevil, a role which she reprised in Jessica Jones and Luke Cage.[23] Dawson's likeness was also used in the Jessica Jones tie-in comic as her character on both shows. Dawson has continued this role in 2017 in Iron Fist and The Defenders.

After months of speculation, Dawson and comedian Eric Andre confirmed in February 2017 that they were in a relationship.[24] Rosario shared in September 2017 that she and Andre were still together and he supported her during surgery due to a ruptured ovarian cyst and internal bleeding. As of November 2017, the couple had separated.[25]

Dawson is a self-professed Trekkie who mentioned both her and her brother's love of Star Trek in an interview with Conan O'Brien, and also demonstrated her knowledge of several Klingon words.[26]

Dawson at the Bernie Sanders rally in Washington Square Park, 2016

Dawson was arrested in 2004, while protesting against president George W. Bush.[28]

Dawson endorsed Barack Obama for re-election in 2012,[29] and Bernie Sanders for the Democratic nomination in the 2016 Democratic Party primaries.[30]

On April 15, 2016, Dawson was among the protesters arrested during Democracy Spring in Washington, D.C.[31]

In the 2016 U.S. Presidential Election Dawson endorsed U.S. Green Party Presidential Candidate Jill Stein, saying she could not support either Donald Trump or Hillary Clinton, as she felt they were for the elites.[32]

Dawson at the 2008 Willow Awards

Dawson is involved with the Lower East Side Girls Club[33] and supports other charities such as environmental group Global Cool, the ONE Campaign, Operation USA, Oxfam, Amnesty International, Parents, Families and Friends of Lesbians and Gays (PFLAG), the International Rescue Committee, Voto Latino,[34] and Stay Close.org, a poster and public service ad campaign for PFLAG where she is featured with her uncle[35] Frank Jump.[36] She has participated in the Vagina Monologues (she refers to her vagina as "The General")[37] and serves on the board for V-Day, a global non-profit movement that raises funds for women's anti-violence groups through benefits of this play.[38]

In October 2008, Dawson became a spokeswoman for TripAdvisor.com's philanthropy program, More Than Footprints, Conservation International, Doctors Without Borders, National Geographic Society, The Nature Conservancy, and Save The Children. Also in October 2008, she lent her voice to the RESPECT! Campaign,[39] a movement aimed at preventing domestic violence. She recorded a voice message for the Giverespect.org Web site stressing the importance of respect in helping stop domestic violence. In 2012, Dawson partnered with SodaStream International in launching the first annual Unbottle the World Day, a campaign conceived in an effort to raise awareness to the impact of cans and plastic bottles on the environment.[40] Dawson also sits on the Board of Directors of Scenarios USA, which works to support a generation of reflective, outspoken, and confident youth through filmmaking and uses film to educate students through a variety of programs.

Main article: List of awards and nominations received by Rosario Dawson
Report a problem
Write to Rosario Dawson at FanPal • 2022