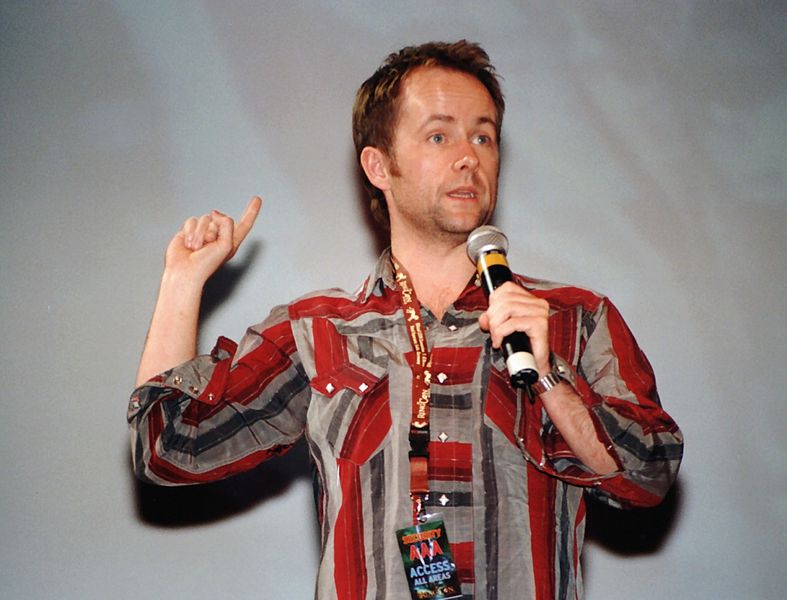 Boyd was born in Glasgow, Scotland to William and Mary Boyd,[1] who both died a year apart when Boyd was in his early teens.[3] He worked as a bookbinder for six years before pursuing an acting career. After graduating from the Royal Scottish Academy of Music and Drama, he went on to perform with St Andrews Repertory and the Traverse Theatre.[3]
Read more...

Boyd started his career appearing in Taggart (1996), The Soldier's Leap (1998), and Urban Ghost Story (1998). He also appeared in the 7:84 Theatre Company Scotland production of Caledonia Dreaming by David Greig in 1997. His breakthrough and most notable acting role was Peregrin "Pippin" Took in The Lord of the Rings trilogy, from 2001 to 2003. Boyd wrote the melody for and sang the song "The Edge of Night", which was featured in Peter Jackson's The Lord of the Rings: The Return of the King.[4] The song was later used over the trailer for The Hobbit: The Battle of the Five Armies (2014), the final film in the Hobbit trilogy. Boyd also wrote and performed the song "The Last Goodbye", which is played during the ending credits of the film.[5]

In 2004, he starred as Glen, the son of Chucky (Brad Dourif) and Tiffany (Jennifer Tilly), in Seed of Chucky. He has also made a cameo appearance in the popular Scottish comedy Still Game in the second episode of the first series.

As well as being a screen actor, he also appears on the stage. Boyd has been in several plays; including San Diego and The Ballad of Crazy Paola. He performed at the Dundee Repertory Theatre as the role of Davie in Sunshine on Leith, as well as in Long Hong Jimmy, in which he was the lead actor. He also starred (2007) as Richard MacDuff in the BBC Radio adaptation of the book: "Dirk Gently′s Holistic Detective Agency" written by Douglas Adams.

In 2011, his feature film Glenn, the Flying Robot was shown in the Dawn Breakers International Film Festival, and was followed by a Netflix release. In June 2012, he appeared on stage as the voice of the guide in The Hitchhiker's Guide to the Galaxy live radio show. In 2013, Boyd played Banquo in Shakespeare's Macbeth, at the Shakespeare's Globe alongside Joseph Millson and Samantha Spiro.

Boyd fronts a band called Beecake.[6][7] The band was named after Boyd's Lord of the Rings co-star Dominic Monaghan sent a picture of a cake covered in bees. Other members of the band included Paul Burke, Billy Johnston, and Rick Martin.[8]

Boyd made a guest appearance on Viggo Mortensen's 2003 album Pandemoniumfromamerica, where he played the bass on two songs, as well as drums on another.

In June 2010, Beecake released an album Soul Swimming. As well as topping some of the international MySpace charts, the band was awarded VisitScotland's award for Best Live Act at the Tartan Clef Music Awards. The award was created by VisitScotland to celebrate Scotland's live music scene and Glasgow's new title of UNESCO City of Music. The Tartan Clef Music Awards raise money for Nordoff Robbins Music Therapy in Scotland - a charity which uses music to bring joy into the lives of children and adults who have been isolated by disability, trauma or illness.[9]

Beecake released the EP Please Stay on 4 June 2012. The music video for the song "Please Stay" from the EP was released to coincide with the release of the EP. The song's music video was directed by Michael Ferns, a graduate from the RSAMD where Boyd himself graduated.[10] The group released their second album Blue Sky Paradise in December 2012.[11] The band released a second EP titled Just B in July 2013.

Boyd is an avid surfer and spent his free time surfing in New Zealand during the production for The Lord of the Rings.[3] He also holds a Grade 7 in foil fencing. He trained in martial arts at the Krauseworld Academy in Glasgow under brothers Steve Krause and Mike Krause where he achieved Phase 4 rank in both Jeet Kune Do and Filipino Kali.[12] He topped a list of the 100 Most Eligible Men in Scotland in 2002.

He owns a house in Glasgow with his wife, Alison McKinnon. The couple had their first child, a boy named Jack William Boyd,[13] on 26 April 2006. He and McKinnon were married in a ceremony with 30 guests at Oran Mor in Glasgow's West End on 29 December 2010. The wedding was attended by castmates Elijah Wood and Dominic Monaghan. A reception was held afterwards for about 130 guests.

Boyd has a tattoo of the Elvish word "nine" written with the Tengwar script, a reference to his involvement in The Lord of the Rings, and the fact that his character was one of the nine members of the Fellowship of the Ring. The other actors of "The Fellowship" (Elijah Wood, Sean Astin, Sean Bean, Ian McKellen, Dominic Monaghan, Viggo Mortensen, and Orlando Bloom) got the same tattoo with the exception of John Rhys-Davies whose stunt double got the tattoo instead.[14]

He remains close with The Lord of the Rings co-star Dominic Monaghan. Monaghan revealed in an interview for the national breakfast television show GMTV that he continues to see Boyd on a regular basis, as he is "essentially, kind of, godfather to his kids." Boyd is one of the patrons of Scottish Youth Theatre, Scotland's National Theatre 'for and by' young people. He is also the patron of the National Boys' Choir of Scotland.

In 2008, Boyd fronted VisitScotland's Perfect Day Campaign, and talked of his love of surfing in Scotland, particularly in Machrihanish near the town of Campbeltown in Kintyre in the west coast of Scotland, and Pease Bay and Coldingham Bay on Scotland's east coast. In an interview about the campaign with The Scotsman on 28 July 2008, he said: "I don't really do much promotional stuff but felt that with this one I could be honest... I'm very proud of where I come from and I get very excited if a friend comes over and I can show them around."[15]