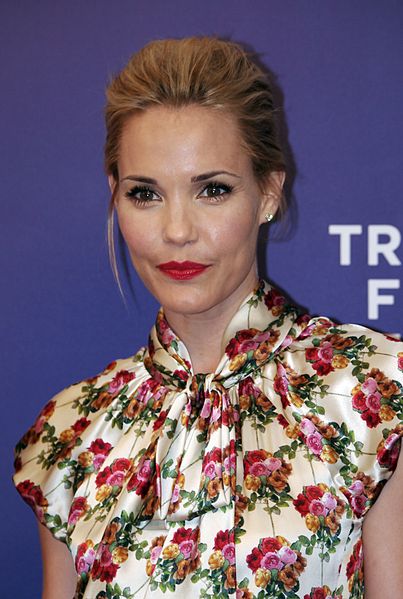 Leslie Louise Bibb (born November 17, 1974)[2][3][4][5] is an American actress and model. Bibb transitioned into film and television during the late 1990s, first appearing on television in 1996 with minor roles in a few television series, while first appearing on film in 1997 with a small role in Private Parts. She scored her first recurring role in the TV show The Big Easy (1997), before her role as Brooke McQueen on the WB Network dramedy series Popular (1999-2001) brought her to the attention of a wider audience; she received a Teen Choice Award for Television Choice Actress for the role. She has also appeared in the Marvel Cinematic Universe as Christine Everheart in the films Iron Man and Iron Man 2, as well as headlining her own show, WHIH News.

Bibb was born in Bismarck, North Dakota, and raised in Nelson County, Virginia. Her father died three years after she was born.[1] Bibb subsequently moved to Richmond, Virginia, with her widowed mother and three older sisters, where she attended the all-girl Saint Gertrude High School.[1] In 1990, The Oprah Winfrey Show and the Elite Agency held a nationwide modeling search. The celebrity judges, John Casablancas, Naomi Campbell, Linda Evangelista, and Iman chose then 16-year-old Bibb as the winner.[6] After finishing her junior year, Bibb flew to New York City to sign a contract with Elite Agency and modeled over that summer and went on a trip to Japan. Bibb returned to the United States for her senior year and graduated in 1991. Bibb's modeling photographs have appeared in the magazines Maxim and FHM.
Read more...

Bibb first appeared on television in 1996, playing in episodes of Pacific Blue and Home Improvement. Her first film role came in the comedy Private Parts. This was followed by her first television series, where she replaced the departed Susan Walters as the female lead in the second season of The Big Easy. Most critics panned the show, and it was canceled months later after low ratings. She appeared in the romantic drama Touch Me (1997) and had a supporting role in the film This Space Between Us (1999).

In 1999, Bibb had her big break appearing as a lead character on the WB Network television series Popular. Her role was Brooke McQueen, the most popular girl at Kennedy High School who is beautiful, a straight-A student, and a cheerleader. The show was a major success among teenagers and led Bibb to more recognizable film roles. The show garnered her a Teen Choice Award for Television Choice Actress and a Young Hollywood Award nomination for Exciting New Face - Female. During the series, she filmed the psychological thriller The Skulls (1999), as the classmate, friend and love interest of Joshua Jackson's character. The Skulls received a negative reception from critics but was a box-office success. She received a role in the 2001 comedy See Spot Run, playing a single mother who spends most of the film on her own "Planes, Trains and Automobiles" adventure.[7]

Bibb was cast in a recurring role on the series ER, and played the lead character on the television series Line of Fire. Bibb joined the cast of Crossing Jordan as Detective Lu Simmons until Season 6.[8]

She appeared as Desiree in the independent film Wristcutters: A Love Story (2006). Wristcutters revolved around two characters who fall in love in purgatory after committing suicide. The film was nominated for the Sundance Film Festival's Grand Jury Prize, two Independent Spirit Awards and the Humanitas Prize.[9] That year, she played as Will Ferrell's wife Carley in the comedy feature film Talladega Nights: The Ballad of Ricky Bobby. Recalling acting with Ferrell during an interview with TV Guide, she said he was "just funny. And he has no qualms about making something funnier for you, even at his expense."[8]

Bibb at the Comic-Con International promoting The Midnight Meat Train in July 2007.

Bibb also starred in the sitcom Atlanta as Jessica, a potential love interest for Freddie Prinze, Jr.'s character, meeting him at a funeral.[10]

She was cast as Dr. Miranda Storm in Sex and Death 101, a black comedy, which was released direct-to-video in 2007. She appeared as a Vanity Fair reporter named Christine Everhart in the action film Iron Man (2008). In an interview, Bibb said about her character in the film: "she has a very strong sense of right and wrong, of good and evil, and I loved her passion."[11]

In the comedy Confessions of a Shopaholic (2009), she portrayed the rival of the main character, played by Isla Fisher. Confessions of a Shopaholic was panned by film critics,[12] however, was a success at the box office. She had a pivotal recurring role on the NBC series Kings as Katrina Ghent, and played as Sarah Lowell in the thriller film Law Abiding Citizen (2009), which was released on October 16, 2009. The film was poorly received by critics.[13]

In 2010, she reprised her role in the sequel to Iron Man, Iron Man 2.[14] The film is Bibb's biggest box office success, with a worldwide gross of $621.8 million.[15] Later in 2010, she starred in the independent comedy Miss Nobody,[16] in which she also served as co-producer. For her performance she won the Best Actress Award at the 26th Boston Film Festival.[17] She was praised by critic Alissa Simon of Variety, who wrote "as she proved in Goran Dukic's Wristcutters: A Love Story, statuesque star Bibb is a smart actress willing to give herself totally to a role. As the sweetly goofy murderess, she takes pratfalls, suffers endless groping and sports unbecoming attire."[18] Bibb also appeared in Kevin James' The Zookeeper, released on July 8, 2011.

Bibb starred in the Neil LaBute play, Reasons to be Happy, which premiered in June 2013 at MCC Theatre in New York.[citation needed]

In 2016, she starred as the antagonist in the first season of YouTube Red original show Rhett and Link's Buddy System. She also appeared in an episode of the show's second season, which was released in 2017. She is currently on ABC's American Housewife playing the divorced next-door neighbor Viv.

Bibb is a supporter of Friends of El Faro, a grassroots non-profit organization that helps raise money for Casa Hogar Sion, an orphanage in Tijuana, Mexico. In 2008, Revlon announced that its Almay Brand has signed Bibb as its ambassador. She acts as a spokeswoman for Revlon's new and existing cosmetics collections. She has appeared in global multi-media campaigns.[21] In Fall 2010, Bibb became partner with the nonprofit LIFE Foundation by serving as the national spokesperson for Life Insurance Awareness Month.[22] She posed nude for the May 2012 issue of Allure magazine.[23]

Bibb married investment banker Rob Born on November 22, 2003, in Zihuatanejo, Mexico. The couple divorced on December 7, 2004.[citation needed] She has been in a relationship with actor Sam Rockwell since 2007, when they reportedly met in Los Angeles as he was filming Frost/Nixon. They both appeared in Iron Man 2 and Don Verdean.

Report a problem
Write to Leslie Bibb at FanPal • 2022