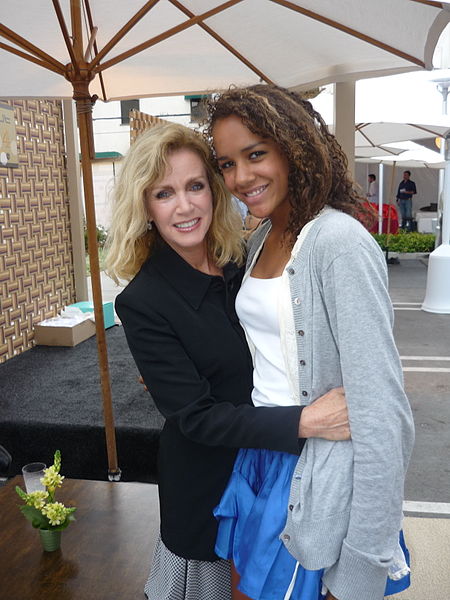 Donna Jean Miller, better known as Donna Mills (born December 11, 1940),[1] is an American actress and producer. She began her television career in 1966 with a recurring role on The Secret Storm, and in the same year appeared on Broadway in the Woody Allen comedy Don't Drink the Water. She made her film debut the following year in The Incident. She then starred for three years in the soap opera Love is a Many Splendored Thing (1967-70), before starring as Tobie Williams, the girlfriend of Clint Eastwood's character in the 1971 cult film Play Misty for Me.

Mills landed the role of Abby Cunningham on the primetime soap opera Knots Landing in 1980 and was a regular on the show until 1989. For this role, she won the Soap Opera Digest Award for Outstanding Villainess three times, in 1986, 1988, and 1989. She has since starred in several TV movies, including False Arrest (1991), In My Daughter's Name (1992), Dangerous Intentions (1995), The Stepford Husbands (1996), and Ladies of the House (2008). In 2014, she joined the cast of long-running daytime soap opera General Hospital, for which she won a 2015 Daytime Emmy Award for Outstanding Special Guest Performer in a Drama Series.

Mills was born Donna Jean Miller in Chicago, the daughter of Bernice, a dance teacher, and Frank, a market researcher.[2] She attended Garvey Elementary School and Taft High School. After being double-promoted at Garvey, she graduated from Taft at an early age.

From there, Mills attended the University of Illinois at Urbana-Champaign where she was a member of Delta Gamma sorority. She completed one year of course work, then left to pursue a dancing career, gaining some early stage experience when she danced in summer stock productions. Her first professional acting role was in a production of Come Blow Your Horn at the Drury Lane Theater in Chicago. She later was cast in a touring production of My Fair Lady, which brought her to New York City.[3]

Mills began her acting career on television with a six-month stint on the CBS daytime soap opera The Secret Storm in 1966, playing the character of Rocket. Following this, she made her film debut in The Incident (1967), co-starring alongside Martin Sheen, Beau Bridges, Ed McMahon, and Thelma Ritter. She appeared on Broadway in Woody Allen's comedy, Don't Drink the Water, as the Sultan of Bashir's wife.

In the fall of 1967, she gained a regular role as ex-nun Laura Donnelly on the soap Love is a Many Splendored Thing. She was a cast member for three years, until she left the series in 1970 and moved to California. In 1971, Mills co-starred in the popular thriller Play Misty for Me, with Clint Eastwood and Jessica Walter.

During 1971-72, she starred in the short-lived sitcom The Good Life with Larry Hagman, who later guest-starred on Knots Landing as J. R. Ewing from the show's sister series Dallas.[3] Prior to signing a contract for Universal Studios in 1972, she spent much of the 1970s appearing as a guest on top-rated television shows such as The Six Million Dollar Man, Hawaii Five-O, The Love Boat, CHiPs, The F.B.I., Quincy, M.E., the UK's Thriller series, Police Woman, and Fantasy Island, as well as many made-for-TV movies.

In 1980, Mills landed her most prominent role — that of scheming, manipulative vixen Abby Cunningham on the long-running primetime soap opera Knots Landing.[3] Mills portrayed Abby from 1980-1989.[4] Prior to being cast in Knots Landing, Mills was primarily known for playing the "damsel in distress" archetype in both film and television media. The actress became somewhat famous for playing these roles, often leading to unwanted typecasting.[4][5] In an interview with Jerry Buck for the Toledo Blade, Mills said: "I got tired of playing the victim. It's a more active role. Abby keeps things stirred up, and I like that."[4] According to Jacobs, Abby was not planned when the show began. He knew that he wanted a female J.R. Ewing-esque character.[6] However, he had a different sense of the character and who would wind up in the role. With Mills's reputation of playing the victim, he initially did not choose her for the part.[6]

Josh Mapes of The Biography Channel listed her in the category "10 Primetime Stars We Love to Hate". He said, "Any great soap opera needs a great villain. While viewers may identify more with the protagonist, the villains in a serial drama always spice things up, cause trouble, and make it more fun to watch. From tongue lashings to catfights, underhanded tricks to boldface lies, the characters we love to hate have each brought a fair share of great moments to primetime soaps. While Larry Hagman played the bad guy on Dallas, Donna Mills played bad girl on its spin-off, Knots Landing. Unapologetically going after what she wanted, Mills's character engaged in affairs with two of the husbands on the Knots Landing cul-de-sac, but like most vixens on primetime soaps, she was only out for money, not love."[7]

In 1989, Mills announced her intention to leave the long-running nighttime soap after nine years as Abby.[8][9] According to Mills, she wanted to take a break from acting for a while, and from Abby, as well.[10]

In an interview with The Cedartown Standard, Mills explained: "I'm tired of the show. It's been too long. I'm not particularly happy with the way they've been writing Abby lately. She's too soft. I'd like Abby to get back to her old self."[11] For this role, she won the Soap Opera Digest Award for Outstanding Villainess on three occasions, in 1986, 1988, and 1989.[12]

After Knots Landing, Mills concentrated on television movies, four of which she co-produced: The World's Oldest Living Bridesmaid (1990), Runaway Father (1991), In My Daughter's Name (1992), and My Name Is Kate (1994).[3] She returned to Knots Landing for its final episode in 1993, and again for the reunion miniseries Knots Landing: Back to the Cul-de-Sac in 1997. In between, she had a brief recurring guest role as the mother of Jane Mancini (played by Josie Bissett) on Melrose Place.[3]

Donna Mills with daughter Chloe in 2009

Mills continued to appear on television in movies and guest roles. In 2005, she reunited with the Knots Landing cast for the nonfiction special, Knots Landing Reunion: Together Again, in which the stars reminisced about the show. In more recent years, Mills has appeared in various television movies such as Love Is A Four Letter Word in 2007 and Ladies of the House in 2008, as well as guest appearances in series such as Cold Case (in a provocative role as a woman who seduces her grandson) and Nip/Tuck (guest-starring with fellow Knots Landing star Joan Van Ark). In 2012, she made a guest appearance on GCB as Bitsy Lourd[13][14] and appeared as a guest judge on the reality series RuPaul's Drag U.[15]

In 2014, Mills made her return to daytime soap operas, for the first time since 1970. She was cast in a major recurring guest-starring role in the ABC soap opera General Hospital.[16][17] She debuted in mid-March and stayed to May.[18] Later in that year, she returned for another multiple-episode arc. At the 42nd Daytime Emmy Awards, Mills won Outstanding Special Guest Performer in a Drama Series for her performance in General Hospital, in a three-way tie with Fred Willard and Ray Wise.[19][20] In August 2018, Mills returned for another multiple-episode arc.[21]

On October 7, 2014, it was announced that Mills will star in the POP reality series Queens of Drama about a group of former stars who now produce a new primetime serial drama to star in. The ladies will be required to work together in front of and behind the cameras as they develop, pitch, and produce their steamy series with the hopes of landing a pilot deal by the end of the season.[22][23]

In 2017, Mills was cast in the role of Daisy Werthan in the Colony Theatre's production of Alfred Uhry’s Pulitzer Prize-winning play, Driving Miss Daisy.[27]

Mills has never married. She has one daughter, Chloe, whom she adopted in late 1994 when Chloe was four days old.[28][29]

Outside of acting, Mills released The Eyes Have It in 1986, an instructional video for achieving several different make-up looks. She went on to release her own line of cosmetics of the same name.[citation needed] She appeared in cover-featured (non-nude) pictorials for the October 1987[30] and November 1989 editions of Playboy.[31]

Report a problem
Write to Donna Mills at FanPal • 2023