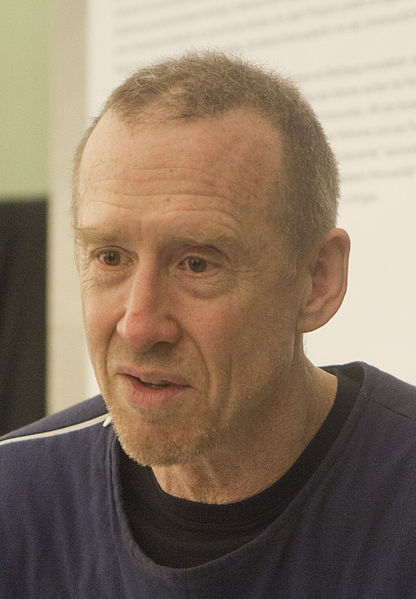 William Forsythe (born December 30, 1949 in New York City) is an American dancer and choreographer resident in Frankfurt am Main in Hessen. He is known internationally for his work with the Ballet Frankfurt (1984-2004) and The Forsythe Company (2005-2015). Recognized for the integration of ballet and visual arts, which displayed both abstraction and forceful theatricality, his vision of choreography as an organizational practice has inspired him to produce numerous installations, films, and web-based knowledge creation, incorporating the spoken word {and} experimental music.

William Forsythe began studying at the Joffrey Ballet School in New York in 1969 and began his professional career as an apprentice with the Joffrey Ballet in 1971rom 1971 to 1973 danced with Joffrey Ballet II, often appearing in the parent company’s productions. After this, he followed his then wife, Eileen Brady, joining the Stuttgart Ballet in 1973. Encouraged by the director, Marcia Haydée, Forsythe began choreographing works for the company and in 1976 he choreographed his first piece, Urlicht. He became the Stuttgart’s resident choreographer in 1978 and that same year created his first piece for the company, Dream of Galilei. During the next seven years he created original works for the Stuttgart Ensemble, and for ballet companies in Munich, The Hague, London, Basel, Berlin, Frankfurt am Main, Paris, New York, and San Francisco. In 1984 he was appointed director of the government-sponsored Ballett Frankfurt. In 2002, however, the Frankfurt government began to withdraw its support in order to cut costs and to favour a more conventional dance company. The public protested, but Forsythe decided to move on, and in 2004 the Frankfurt Ballet gave its last performance. After the closure of Ballet Frankfurt in 2004, he founded the Forsythe Company (2005) with the support of the states of Saxony and Hesse, the cities of Dresden and Frankfurt am Main, and private sponsors.

The Forsythe Company, based in Dresden and Frankfurt am Main, was about half the size of the Frankfurt Ballet, but nearly all of its dancers were from that company. Forsythe continued to present his vision to a wide audience. With bases in Frankfurt and Dresden and supported by both state and private funding, the Forsythe Company made its debut in 2005 with the premiere of Forsythe’s Three Atmospheric Studies. A major retrospective of Forsythe’s work was presented at the Pinakothek der Moderne in Munich in 2006, and in subsequent years, his company toured across Europe, appearing in Paris, Zürich, and London. In 2009 London held a monthlong “Focus on Forsythe” celebration that included events across the city, a traveling multimedia installation, and the performance of Nowhere and Everywhere at the Same Time, an elaborate installation piece at the Tate Modern, in which dancers weaved through hundreds of suspended pendulums.

Throughout his career, Forsythe has experimented with a freer approach to choreography in which the dancers are allowed to make choices about order and timing comparable to those made by musicians playing a cadenza. As a training tool for dancers, he developed a CD-ROM entitled Improvisation Technologies (1995), which in turn resulted in the piece Self Meant to Govern, the first part of the evening-length work, Eidos: Telos (1995) which used monitors to provide dancers with verbal cues that spurred movement responses.

Forsythe has produced and collaborated on numerous installation works, including White Bouncy Castle (1997, in collaboration with Dana Caspersen and Joel Ryan), City of Abstracts (2000), Scattered Crowd (2002), airdrawing|whenever on on on nohow on (2004, collaborating with Peter Welz), and You made me a monster (2005). Installation works by Forsythe have been shown at the Louvre Museum, Venice Biennale, the Renaissance Society in Chicago, and other locations. Forsythe has been commissioned to produce architectural and performance installations by architect-artist Daniel Libeskind, ARTANGEL (London), Creative Time (New York), and the City of Paris.

In 2014, Forsythe announced he would join the University of Southern California's newly created Glorya Kaufman School of Dance as a professor in fall 2015, when its first Bachelor of Fine Arts dance majors would begin attending; he spends six to eight weeks a year at the university in Los Angeles. Moreover, in 2015 The Forsythe Company was taken over by Jacopo Godani, an Italian dancer and choreographer, under a new name The Dresden Frankfurt Ballet Company.

Forsythe believes that classical ballet is a language with rules to follow. However, even though he is aware of these rules he is much more interested in bending and eventually breaking these guidelines. His style is strictly based on classical ballet, using traditional positions, but developing them to the extreme. Great admirer of Balanchine, Forsythe took Mr.B’s work as a starting point, and pushed it forward, experimenting with structure, score and movements. In fact, very fast footwork, and shaped hands (often with broken wrists) are at the base of his vocabulary. Moreover, he is extremely fond to the concept of épaulement, considered “the key of ballet,” since it’s based on the mechanism of torsion of the upper body related to the position of feet and legs. Many of his pieces are danced on pointe, but he has used all kind of footwear (work-boots, socks, slippers…), in order to explore different choreographic results. The extreme positions involved in his ballets require a great deal of flexibility, in fact most of his dancers possess that skill. As a matter of fact, in many of his pas de deux the woman is seen researching daring positions with one leg at 180 degrees or beyond, experimenting with a revolutionary approach to duets as well. In fact, the male dancer is not simply holding the ballerina on her balance, but both dancers are counterbalancing each other so that the axis is shared between the two performers.

On the structure point of view, he likes to play with the typical expectations of the audience when watching a performance. In the second act of Artifact (1984), for example, he raises and lowers the curtains in the middle of the dance, in order to change drastically the environment on stage, and willingly lights the dancers “improperly.”

Most of his pieces use electronic scores composed by Thom Willems. Forsythe and Willems both believe that music and dance are independent from each other, and even though they coincide in dynamics and length, none of the two is there to illustrate the other. Their main concern is the inner structure of their works, so to leave the emotional interpretation to the audience or the listener.