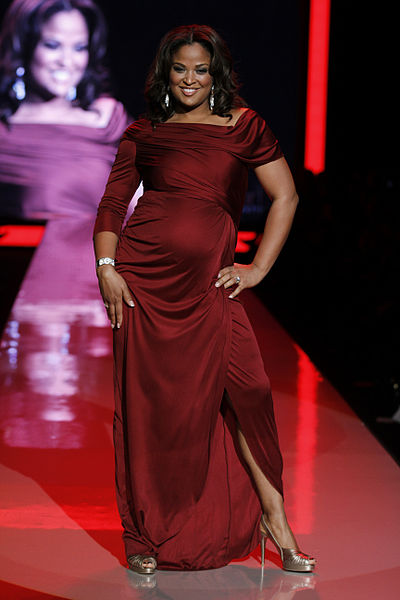 Laila Amaria Ali (born December 30, 1977) is an American former professional boxer who competed from 1999 to 2007. She is the daughter of boxer, and is the eighth of her father's nine children.[2] During her career, from which she retired undefeated, she held the WBC, WIBA, IWBF and IBA female super middleweight titles, and the IWBF light heavyweight title.

Laila Amaria Ali was born December 30, 1977, in Miami Beach, Florida, the daughter of boxer Muhammad Ali and his third wife, Veronica Porché Ali.[3] Ali was a manicurist at age 16. She graduated from California's Santa Monica College with a business degree.[4] She owned her own nail salon before she began boxing.[5][6]
Read more...

Ali began boxing when she was 18 years old, after having first noticed women's boxing when watching a Christy Martin fight.[7][8] She first publicized her decision to become a professional boxer in a Good Morning America interview with Diane Sawyer.[9] When she first told her father, Muhammad Ali, that she was planning to box professionally, he was unhappy about her entering such a dangerous profession.[10]

In her first match, on October 8, 1999, the 5'10", 166 lbs, 21-year-old Ali boxed April Fowler of Michigan City, Indiana. They fought at the Turning Stone Resort & Casino on the Oneida Indian Nation in Verona, New York. Although this was Ali's first match, many journalists and fans attended, largely because she was Muhammad Ali's daughter. Attention to Ali's ring debut was further boosted because it occurred on the eve of what was supposed to be the first male-female professional bout ever to be sanctioned by a US state boxing commission ... later ruled an exhibition. As WomenBoxing.com explains: "The near-alignment of the two events focused more attention on female professional boxing than there had been since Christy Martin's 1996 pay-per-view fight with Deirdre Gogarty." Ali knocked out April Fowler - described by WomenBoxing.com as an "out-of-shape novice" - in the first round.[2]

Ali also won her second match by a TKO with only 3 seconds left on the clock. In that match her opponent was 5'4" Shadina Pennybaker, from Pittsburgh, who was making a pro debut after earning a 2-1 record as an amateur. They fought at the Mountaineer Casino, Racetrack and Resort in Chester, West Virginia.[2]

Ali captured eight wins in a row and many boxing fans expressed a desire to see her square off in a boxing ring with George Foreman's daughter, Freeda Foreman or Joe Frazier's daughter, Jackie Frazier-Lyde. On the evening of June 8, 2001, Ali and Frazier finally met. The fight was nicknamed Ali/Frazier IV in allusion to their fathers' famous fight trilogy. Ali won by a majority judges' decision in eight rounds. This match by Ali and Frazier was the first main-event pay-per-view match between two women.

On November 8, she retained that title and unified the crown by adding the WIBA and IWBF belts with an eight-round TKO win over her division's other world champion, Valerie Mahfood, in Las Vegas. Ali stopped a bloodied Mahfood in eight rounds.[13]

On June 21, 2003, Mahfood and Ali fought a rematch, this time in Los Angeles. Once again bloodied by Ali, Mahfood lost by TKO in six rounds while trying to recover her world title. Nevertheless, for the first time in Ali's boxing career, she suffered a bad cut on her right eyelid and a bloodied nose, inflicted by Mahfood, something no other female boxer has done to Ali to this day.[14]

On July 30, 2004, she stopped Monica Nunez in nine rounds, in her father's native city of Louisville, Kentucky. This fight was part of the undercard for the fight in which Mike Tyson was surprisingly knocked out by fringe contender Danny Williams.[17]

On September 24, 2004, Ali added the IWBF Light Heavyweight title to her resume by beating Gwendolyn O'Neil (whom she had earlier canceled a fight against) by a knockout in three rounds, at Atlanta, Georgia.[18]

On February 1, 2005, in Atlanta, Ali scored a commanding and decisive eighth-round technical knockout over Cassandra Geiggar in a ten-round fight.[19]

On June 11, 2005, on the undercard to the Tyson-Kevin McBride fight, Ali defeated Erin Toughill in round three to remain undefeated and won the World Boxing Council title in addition to defending her WIBA crown.[20] She was the second woman to win a WBC title (Jackie Nava was the first).[21] Toughill and Ali disliked each other, and prior to the fight Toughill joked about Ali. Ali promised she would punish Toughill, much like her father did with Ernie Terrell back in 1967.[20]

On December 17, 2005, in Berlin, Ali fought and defeated Åsa Sandell by TKO in the fifth round. Following Ali's hard right to Sandell's face with 17 seconds remaining in Round 5, Sandell was struck by numerous undefended shots to her head. The referee stopped the bout with 12 seconds remaining. Muhammad Ali was in attendance and kissed his daughter.[22]

While a guest on Quite Frankly with Stephen A. Smith on June 7, 2006, Ali announced that she would be making a world tour, and said that she was looking forward to fighting Ann Wolfe in October 2006.[8] However, the fight with Wolfe never materialized. Instead, on November 11, 2006, Ali fought and defeated Shelley Burton by TKO in the fourth round.[23] Ali was rescheduled to fight O'Neil in Cape Town, on August 5, 2006, but Ali pulled out amid allegations of fraud.[24] The match eventually took place in South Africa on February 2, 2007.[25] Ali defeated O'Neil in the first-round by technical knockout.[26] It was Ali's last professional fight.

Other top women's boxing champions such as Ann Wolfe (24-1) [28] have claimed in interviews that they have challenged Ali unofficially, but Ali found ways of avoiding them. Fringe boxing writers have expressed disappointment in Ali's perceived avoidance of some contenders.[29][30][31][32] However, Ali has contended that other boxers want unrealistic amounts of money and "play themselves right out of the deal" during negotiations intentionally because their names will have no value after they've fought Ali.[33]

In 2000, Ali played herself in an episode of The Jersey called Bat Girl[34]where Morgan Hudson (played by Courtnee Draper) turns to her in order to get a little more of a perspective as she learns the true meaning of girl power.

In early 2002, Ali appeared in a boxing role for the music video "Deny" by Canadian hard rock band Default.[35] The video gained airplay on music channels including MTV2 and MMUSA.

In mid-2007, Ali was a participant in season four of the American version of the television show Dancing with the Stars;[38] she had no previous dancing experience. She and her professional dancing partner, Maksim Chmerkovskiy, were widely praised by the judges, receiving the first "10" from judge Len Goodman for their rumba. They came in third place in the competition, losing to Apolo Anton Ohno (with Julianne Hough) and Joey Fatone (with Kym Johnson).[39]

Ali hosted the revival of American Gladiators alongside Hulk Hogan. The show premiered in January 2008.[40]

Ali and the cast of American Gladiators appeared on the NBC show Celebrity Family Feud (Roker) in an episode that aired on July 8, 2008.[41]

Ali joined the CBS team as a contributing correspondent on The Early Show with her first appearance in early January 2008.[42]

She hosted The N's Student Body, a reality show on The N.[43]

In 2012, Ali was picked to co-host Everyday Health with Ethan Zohn and Jenna Morasca. The show aired on ABC Saturday mornings and profiled everyday people living with health issues, who aspired to not let their issues keep them from helping others or doing extraordinary things.[45]

Ali was a contestant on the NBC celebrity reality competition series called Stars Earn Stripes from August 2012 to September 2012.[47]

On February 4, 2013, Ali appeared on the NBC reality series, The Biggest Loser in the episode "Lead By Example". In the episode, she boxed alongside Dolvett Quince's team, consisting of Jackson Carter, Joe Ostaszewski and Francelina Morillo.

In March 2013, Ali started appearing as a co-host on multiple episodes of the E! talk show series Fashion Police filling in for Giuliana Rancic ,who was on maternity leave. In May 2013, Ali once again filled in for Rancic, who had other commitments and was unable attend the show.

In May 2014, Ali participated in an episode of Celebrity Wife Swap. She swapped places with singer Angie Stone and tried to instill healthier habits on the family.

In April 2013, Ali participated in two episodes of Chopped: All Stars, making it to the final round, competing for a favorite charity.[48]

In September 2013, Ali began hosting All In with Laila Ali, a new show in the CBS Saturday morning lineup "CBS Dream Team". The following year, she began hosting Late Night Chef Fight on the cable network FYI. In 2014, she appeared in the film Falcon Rising.

In 2002, Ali wrote (with co-author David Ritz) the book Reach! Finding Strength, Spirit, and Personal Power,[50] meant to motivate and inspire young people. In this book, she confides that she felt isolated at times because of her parents' fame. Ali has also spent some time in jail, and describes her arrests and the physical abuse she experienced in jail. Critics say that Ali's book has a good foundation but she does not give the readers advice; rather she just talks about her own experiences.[51]

Professional wrestling legend Hulk Hogan credits Laila Ali with saving his life by telephoning him when he was depressed and suicidal.[56]

Although raised as a Muslim, Laila Ali does not follow the Islamic faith.[57]

Ali is the sister-in-law of professional mixed martial artist Kevin Casey, who is married to her sister Hana.[58]