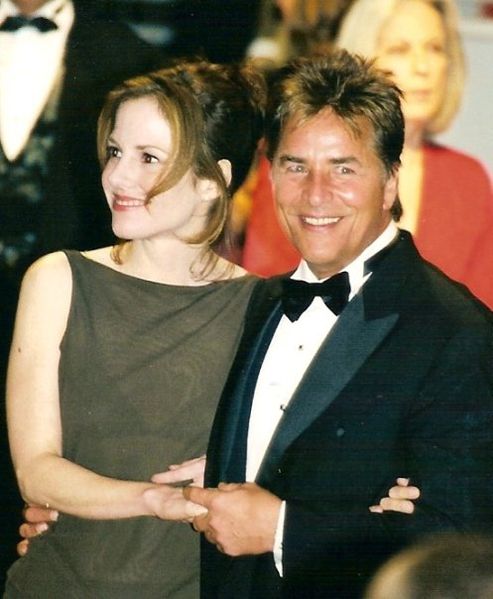 Donnie Wayne "Don" Johnson (born December 15, 1949) is an American actor, producer, director, singer, and songwriter. He is best known for his role as James "Sonny" Crockett in the 1980s television series Miami Vice and as the eponymous lead role in the 1990s cop series Nash Bridges. Johnson is a Golden Globe-winning actor for his role in Miami Vice and a winner of the American Power Boat Association Offshore World Cup, and has received a star on the Hollywood Walk of Fame.

Johnson was born on December 15, 1949 in Flat Creek, Missouri. His mother, Nell (née Wilson), was a beautician, and his father, Wayne Fred Johnson, was a farmer. At the time of his birth, they were 19 and 17, respectively. At age six, he moved from Missouri to Wichita, Kansas. A 1967 graduate of South High School, he was involved in the high school's theatre program. As a senior, he played the lead role of Tony in West Side Story. His biography noted that he had previously appeared in "Burnt Cork and Melody" and "The Hullabaloo." He also attended the University of Kansas in Lawrence, Kansas.

Johnson has spoken about his draft-exempt status and his dislike for war.

Johnson studied drama at the American Conservatory Theater in San Francisco. His first major role was in the 1969 Los Angeles stage production of Fortune and Men's Eyes, in which he played Smitty, the lead role. This exposure led to the quickly forgotten film The Magic Garden of Stanley Sweetheart (1970, based on a novel by Robert Westbrook, son of columnist Sheilah Graham). He continued to work on stage, film and television without breaking out into stardom. His notable films from this period were Zachariah (1971), The Harrad Experiment (1973), Lollipop and Roses (1974), and A Boy and His Dog (1975). In 1976, Johnson was roommates with actor Sal Mineo when Mineo was murdered outside their West Hollywood, California apartment.

From 1984-1989—after years of struggling to establish himself as a TV actor (in such fare as Revenge of the Stepford Wives), and a string of pilots, none of which became a TV series—Johnson landed a starring role as undercover police detective Sonny Crockett in the cop series, Miami Vice. The character typically wore thousand-dollar Versace and Hugo Boss suits over pastel cotton T-shirts, drove a Ferrari 365 GTS/4 Daytona (really a replica kit on a 1981 Corvette chassis), followed by a Ferrari Testarossa and lived on a 40-foot (12 m) (later a 42 -ft) Endeavour yacht with his pet alligator, Elvis. Miami Vice was noted for its revolutionary use of music, cinematography, imagery, and its glitzy take on the police drama genre. In the show, his partner was Ricardo Tubbs, played by Philip Michael Thomas. Between seasons, Johnson gained further renown through several TV miniseries, such as the 1985 TV remake of The Long, Hot Summer.

In the fall of 2005, he briefly starred in The WB courtroom television drama show Just Legal as a jaded lawyer with a very young and idealistic protégé/partner (Jay Baruchel); the show was canceled in October 2005 after just three episodes aired. In January 2007, Johnson began a run in the West End of London production of Guys and Dolls as Nathan Detroit.

Johnson also has a role in the Norwegian comedy Lange Flate Ballær 2 ("Long Flat Balls II"), directed by Johnson's friend Harald Zwart. Johnson did the movie as a favour to Zwart. The movie was launched March 14, 2008 in Norway, with Johnson making an appearance at the premiere. He next appeared in When in Rome with Danny DeVito, Anjelica Huston and Kristen Bell.

In October 2010, he began appearing on the HBO series Eastbound & Down, playing Kenny Powers' long-lost father, going by the alias "Eduardo Sanchez". He also reprised his role as Sonny Crockett for a Nike commercial with LeBron James where the NBA player contemplates acting and appears alongside Johnson on Miami Vice.

Johnson released two albums of pop music in the 1980s, one in 1986 and the other in 1989. His single, "Heartbeat", reached #5 on the Billboard Hot 100 singles chart. It was the title track from his first album, and was a collaboration with Robert Tepper. Johnson is also a good friend of Willie Nelson and Robert Tepper, and was briefly a part of the "Thailand Pack", alongside Tommy Morrison, and British TV funny man Les Dennis. Previously, Johnson worked with Gregg Allman and Dickey Betts of the Allman Brothers, co-writing the songs "Blind Love" and "Can't Take It with You" with Dickie Betts, which appeared on their 1979 album, Enlightened Rogues. B.B. King and Jules Taub co-wrote the song "Blind Love", the Allman's covered it. There is no writer's credit to confirm he co-wrote "Can't Take It with You". "Till I Loved You" was the title track (a Top 40 hit in the Billboard Hot 100) of a studio album released on October 25, 1988 on Columbia Records. The song was a duet with then girl-friend, Barbra Streisand. The song was re-released on the Streisand album "Duets" in 2002.

Johnson has had four wives in five marriages, three of which were brief. His first two marriages were annulled within a matter of days. The names of Johnson's first two wives have not been made public knowledge, though they were said to have been a dancer and a "rich bimbo." In the early 1970s, Johnson lived with groupie Pamela Des Barres. During the first half of 1972, he met Melanie Griffith, the 14-year-old daughter of his Harrad Experiment co-star Tippi Hedren. When Griffith was 15, she and Johnson began living together in a rented house in Laurel Canyon. On her 18th birthday they became engaged, and were married in January 1976; they filed for divorce that July. They reunited and conceived a daughter close to the start of 1989, Dakota Johnson (born October 4, 1989) and were married again from that year until 1996.

In 1980, he dated Sally Adams (then using the aka Sally Savalas), mother of actress Nicollette Sheridan. Cybill Shepherd has written of a liaison with Johnson in her autobiography.

...n Jan. 17, 1981, ... D'Arbanville ... met Johnson at an L.A. restaurant. "I saw this gorgeous guy," she says, "and I ran after him. saying, 'Hey you.' It turned out to be Donny. I said, 'So, Donny, how many times have you been married?' He said, 'Three.' I said, 'Say hello to No. 4.'...." Johnson ditched his date, Tanya Tucker, and spent the night with Patti. "One month later," she says, "I was pregnant." The couple planned to marry that fall, but D'Arbanville changed her mind. "I didn't see the point," she says. "Besides, there were areas in which we didn't get along." Drinking was one of them. Shortly after becoming pregnant, Patti sobered up. "Donny didn't," she says " we grew further apart." ... Johnson eventually stopped drinking with D'Arbanville's help.... Miami Vice took Johnson to Florida in 1984, and the couple split a year later....

Johnson next had a relationship with Barbra Streisand, lasting into at least September 1988. In 1995-1996 Johnson was briefly engaged to Jodi Lyn O'Keefe who played his daughter on Nash Bridges.

In November 2002, German customs officers at the Swiss-German border performed a routine search of Johnson's car. Bank statements evidencing US$8 billion in transactions were found in the trunk of his car. He was accompanied in his black Mercedes-Benz by three men: an investment adviser, a personal assistant, and a third of unknown identity. Initially it was thought Johnson was involved in money laundering, but he was cleared of wrongdoing.

In May 2008, Johnson came within hours of losing his Woody Creek, Colorado home to foreclosure; he paid off his $14.5 million debts less than 24 hours before a scheduled auction of the property.

In July 2010, a Los Angeles jury awarded Johnson $23.2 million in a lawsuit against production company Rysher Entertainment, from whom Johnson sought a share of profits commensurate with his ownership of half the copyright of Nash Bridges. Rysher announced it would appeal the verdict. In January 2013, after recalculating interest and avoiding an additional appeal, Rysher paid Johnson $19 million to end the lawsuit.