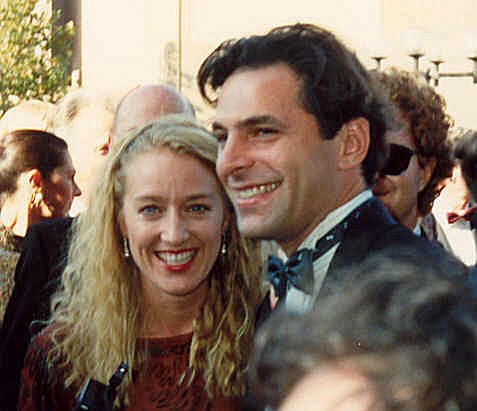 Patricia Wettig (born December 4, 1951) is an American actress and playwright.[1] She is best known for her role as Nancy Weston in the television series Thirtysomething (1987-1991), for which she received a Golden Globe Award and three Primetime Emmy Awards.

Wettig was born in Milford, Ohio, to Florence (née Morlock) and Clifford Neal Wettig, a high school basketball coach. She has three sisters: Pam, Phyllis, and Peggy. She was raised in Grove City, Pennsylvania and graduated in 1970.[2] She attended Ohio Wesleyan University and graduated from Temple University in 1975. She returned to her studies later in life and received a Master of Fine Arts in playwriting from Smith College in 2001.[3] F2M, a play she authored, was performed in 2011 as part of the New York Stage and Film and Vassar College's 2011 Powerhouse Theater season.[4][5]
Read more...

Although Wettig has acted in a number of films (including City Slickers, Guilty by Suspicion, and The Langoliers), she is best known for her work on television. She received critical acclaim (and a number of awards) for her role as Nancy Weston on ABC's thirtysomething. Her portrayal of Nancy's cancer struggle attracted considerable acclaim and attention.[6][7] She also portrayed Joanne McFadden on the television program St. Elsewhere. In addition, Wettig appeared in a number of popular television programs during the 1980s and 1990s including L.A. Law, Frasier, Hill Street Blues, and Remington Steele.[3]

Wettig starred in the ABC comedy-drama series Brothers & Sisters, which debuted in September 2006, where she portrays the Walker family patriarch's mistress, Holly Harper. Her character was the co-CEO at Ojai Foods with Sarah Walker, the daughter of William Walker. She left the show mid-season during Season 5 after her character Holly Harper followed her daughter to New York along with her fiance David played by real life husband Ken Olin.[8] This season sees the whole Harper family absent from the show. Wettig also had the recurring role of CIA psychotherapist Dr. Judy Barnett on Alias (husband Olin was a producer and director on the series). Before joining Brothers & Sisters, she played the fictional Vice President Caroline Reynolds on the 2005 Fox television drama, Prison Break. She turned down Fox's offer of becoming a series regular on Prison Break in order to pursue Brothers & Sisters. In 2007 ABC and FOX agreed that Wettig could briefly reprise her role as Caroline Reynolds, providing off-camera voice-overs and appearing in a scene with Wentworth Miller.[9]

In 2012, Wettig joined the national tour for Larry Kramer's production, The Normal Heart.[10]