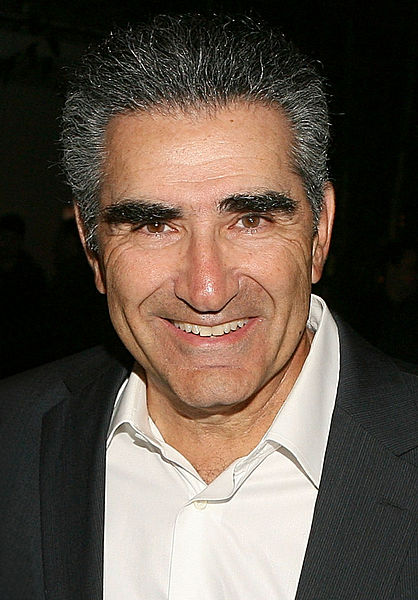 Eugene Levy, CM (born December 17, 1946) is a Canadian actor, comedian, producer, director, and writer. He is the only actor to have appeared in all eight of the American Pie films, in his role as Noah Levenstein. He often plays nerdy, unconventional figures, with his humour often deriving from his excessive explanations of matters and the way in which he deals with sticky situations. Levy is a regular collaborator of actor-director Christopher Guest, appearing in and co-writing four of his films, commencing with Waiting for Guffman (1997).

Levy received the Governor General's Performing Arts Award, Canada's highest honour in the performing arts, in 2008.[1] He was appointed to the Order of Canada on June 30, 2011.[2]

Levy was born to a Jewish family[3] in Hamilton, Ontario. His mother was a housewife and his father was a foreman at an automobile plant.[4] He went to Westdale Secondary School, and attended McMaster University. He was vice-president of the McMaster Film Board, a student film group, where he met moviemaker Ivan Reitman.[citation needed]
Read more...

Though he has been the "above the title" star in only two films, Armed and Dangerous (1986) and The Man (2005), he has featured prominently in many films. He is the co-writer and frequent cast member of Christopher Guest’s mockumentary features, particularly A Mighty Wind, where his sympathetic performance as emotionally unstable folksinger Mitch Cohen won kudos; his accolades included a Satellite Award for Best Supporting Actor - Musical or Comedy and the prestigious New York Film Critics Circle Award for Best Supporting Actor. In the 1980s and 1990s, he appeared in Splash, National Lampoon’s Vacation, Club Paradise, Stay Tuned, Multiplicity and other comedies. Levy was the creator of Maniac Mansion, a television sitcom based on the LucasArts video game of the same name. He was also seriously considered for the role of Toby Ziegler on The West Wing, a role that went to actor Richard Schiff.

Levy, along with his son Dan Levy, is co-creator of the CBC/PopTV sitcom, Schitt's Creek. He also stars in the show alongside his son as head of the Rose family, Johnny Rose. His daughter, Sarah Levy, portrays Twyla Sands, the waitress at the Schitt‘s Creek diner.[5]

Levy's career received a tremendous boost in 1999, when he was cast as the clueless but loving dad in the blockbuster American Pie. Reprising the role in three film sequels and starring in four straight-to-video sequels made him something of a cult hero. Levy has been quoted as saying the American Pie series was a particular turning point in his career, affording him "a new perspective on his career at the time". Since working on the first two American Pie movies, Levy has worked with Steve Martin and Queen Latifah in Bringing Down the House, and most recently appeared with Martin in Cheaper by the Dozen 2. Levy again appeared as his famous character, Noah Levenstein, in the fourth theatrical film in the American Pie series, American Reunion. He is the only actor to appear in all eight American Pie films.

Levy, along with Christopher Guest and Michael McKean, was awarded the 2003 Grammy Award for Best Song Written for a Motion Picture, Television, or Other Visual Media for the title song from A Mighty Wind. Levy appeared in the corner of a poster hanging outside the movie theatre in Springfield in the "See Homer Run" episode of The Simpsons. (The poster was advertising for Princess Rock Star and featured a girl with an electric guitar, with Levy in the corner wearing a royal crown. A liner note under him read "Eugene Levy as the King").

In March 2006, it was announced that he would receive a star on Canada's Walk of Fame. In 2002, the entire cast of SCTV was given a group star, and although Levy is not mentioned on the actual star, he was still inducted as a part of the group. This makes him one of only four two-time honourees, alongside fellow SCTV alumni John Candy, Martin Short and Catherine O'Hara.

In 2008, the Governor General of Canada presented Levy with the Governor General's Performing Arts Awards (GGPAA), a lifetime achievement award considered "for their outstanding body of work and enduring contribution to the performing arts in Canada.".[6] In 2010, Levy was awarded the ACTRA Award by the union representing Canada's actors.[7]

In 2011, Levy was made a Member of the Order of Canada "for his contributions as a comic actor and writer, and for his dedication to charitable causes."[8]

On May 22, 2012, Levy delivered a commencement address at Dalhousie University, in Halifax, Nova Scotia, and was awarded the degree Doctor of Laws (honoris causa).

On June 11, 2012, Levy was presented with the Queen Elizabeth II Diamond Jubilee Medal by the Lieutenant Governor of Ontario.[9]

On March 13, 2016, Levy took home the award for "Best Performance by an Actor in a Continuing Leading Comedic Role" at the 4th Annual Canadian Screen Awards, for his performance as Johnny Rose in the CBC/PopTV sitcom, Schitt's Creek.[10]

Levy married Deborah Divine in 1977 and together have two children: Dan and Sarah.

Levy is an advocate for autism awareness and treatment.[11] He was a close friend of John Candy, who died of a heart attack in 1994.

Levy is a member of the Canadian charity Artists Against Racism.[12]