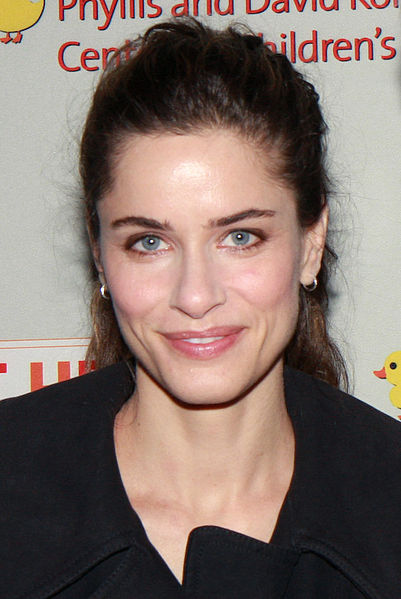 Amanda Peet (born January 11, 1972) is an American actress. After studying at Columbia University, Peet began her career in television commercials, and progressed to small roles on television, before making her film debut in 1995. A featured role in the 2000 comedy film The Whole Nine Yards brought her wider recognition.[1]

She has appeared in a variety of films, including the 2001 comedy Saving Silverman, the 2003 romantic comedy Something's Gotta Give, the 2003 psychological thriller film Identity, the 2005 action-thriller Syriana, the 2006 comedy-drama remake Griffin & Phoenix, the 2007 romantic comedy The Ex, the 2008 science fiction film The X-Files: I Want to Believe and the 2009 disaster adventure drama 2012. She has also appeared in the 1999 drama series Jack & Jill, the 2006 drama series Studio 60 on the Sunset Strip, and the comedy-drama series Togetherness (2015-2016).

Peet was born in New York City, the daughter of Penny (née Levy), a social worker, and Charles Peet Jr., a corporate lawyer,[2][3] who later divorced. Her father is a Quaker and her mother is Jewish.[4][5] Peet's maternal great-grandfathers were Samuel Levy, a lawyer, businessman, and public official, who served as Manhattan Borough President, and Samuel Roxy Rothafel, a theatrical impresario and entrepreneur.[3]

At age seven, Peet relocated with her family to London, returning to New York four years later.[6] Peet was raised in the Quaker tradition, and attended Friends Seminary, a Quaker school.[7] She attended and graduated from Columbia University with a degree in American history. In college, she auditioned for acting with teacher Uta Hagen and decided to become an actress after taking Hagen's class.[8] During her four-year period of study with Hagen, Peet appeared in the off-Broadway revival of Clifford Odets's Awake and Sing with Stephen Lang.[8]

Peet's first screen performances were in a television commercial for Skittles and an uncredited appearance as the girlfriend of the titular character in the second episode of The Larry Sanders Show in 1992. She made her film debut in the drama film Animal Room (1995), which also starred Neil Patrick Harris and Matthew Lillard. She appeared in the November 1995 episode "Hot Pursuit" of Law and Order. For much of the late 1990s, Peet maintained a steady acting career in relatively obscure independent films. Her next feature film was One Fine Day. The film was released in late 1996, and she co-appeared with George Clooney and Michelle Pfeiffer. Also that year, she had a supporting role in the romantic comedy film She's the One, opposite Jennifer Aniston and Cameron Diaz.

After several small and supporting roles in the 1998 Origin of the Species, Southie and Playing by Heart, Peet had her first major role as Jacqueline Barrett in the 1999 WB network series Jack & Jill (which aired for two seasons). She also appeared in the eighth-season finale of Seinfeld ("The Summer of George")[9] as a waitress whom Jerry Seinfeld meets. In 1999, Peet was cast opposite Sarah Michelle Gellar in the fantasy romantic comedy Simply Irresistible. Her character in the film was Chris, the former girlfriend of Sean Patrick Flanery's character, Tom.

Peet had a supporting role in the biographical film Isn't She Great, in which she appeared with Bette Midler and Nathan Lane. The film was released in January 2000. Peet's first role in a widely released feature film came in 2000, with the mafia comedy film The Whole Nine Yards, starring Bruce Willis and Matthew Perry, playing Jill St. Claire. The film received several favorable reviews from critics[10] and was a big hit at the worldwide box office, with a $106,371,651 gross.[11] Critic Roger Ebert called Peet's performance "Perfect" because "it exactly matches what is required, and then adds a level of heedless glee."[12] She received a nomination for the "Favorite Supporting Actress: Comedy" award at the 2001 Blockbuster Entertainment Awards and for the "Choice Film Liar" award at the 2000 Teen Choice Awards. That same year, landed the starring role, Mia, in the independent film Whipped, won the Young Hollywood Award at the category of "Best New Style Maker", and was voted one of the 50 Most Beautiful People in the World by People magazine.

Peet appeared, playing a psychologist and romantic interest of Jason Biggs's character in the American comedy Saving Silverman (2001). The film was largely panned by critics,[13] but had a minor box office success grossing over $26 million worldwide.[14] Jack Black and Steve Zahn also co-starred in the film. Later, she appeared as Rachel in the 2002 American comedy-drama film Igby Goes Down. In an interview, she explained her character in the film: "She's not very successful at it and she certainly doesn't seduce the right things" and "She seduces all the wrong things and is seduced by all the wrong things, as well."[15]

Peet portrayed a supporting role in the thriller film Changing Lanes (2002) as Ben Affleck's character's wife. In 2003, Peet co-starred with Diane Keaton, Jack Nicholson and Keanu Reeves in the romantic comedy Something's Gotta Give, directed by Nancy Meyers. Her role was Marin Klein, the daughter of Keaton's character, who is a 29-year-old auctioneer, working for Christie's. The film was a commercial and critical success and was nominated for and won several awards. Peet appeared in the 2003 horror and psychological thriller film Identity. She played the role of Paris Nevada, a Las Vegas prostitute. Identity afforded her the chance to work with such actors as John Cusack, Ray Liotta and John Hawkes.[16] The film was a modest box office success worldwide however received much critical acclaim.[16] The following year, she starred in The Whole Ten Yards, the sequel to The Whole Nine Yards. The film was not well received by critics and audience.[17]

In 2005, Peet appeared in the play This Is How It Goes,[18] filling in for Marisa Tomei at the last minute after six days of rehearsal.[8] Peet also co-starred in Woody Allen's tragicomedy Melinda and Melinda, which was given a limited release in the United States on March 18, 2005. The same year, Peet had the lead role with Ashton Kutcher in the romantic comedy film A Lot Like Love. The film is about two people whose relationship slowly evolves from lust to friendship to romance over the course of seven years. A Lot Like Love received mixed reviews and was a box office success. Los Angeles Times stated that Peet "is charming and charismatic without being cloying or artificial." Her on screen chemistry with Kutcher was either criticized or praised by a number of critics. Peet was nominated for the "Choice Movie Actress: Comedy" at the 2005 Teen Choice Awards.

She co-starred alongside George Clooney in the thriller film Syriana, which was based loosely on former Central Intelligence Agency agent Robert Baer and his memoirs of being an agent in the Middle East. In Syriana her character was Julie Woodman, the wife of Brian (played by Matt Damon). The film was released theatrically in November 2005.

In February 2006, she performed in Neil Simon's Broadway production of Barefoot in the Park. Later in 2006, she starred in the romantic drama film Griffin & Phoenix, a remake of the 1976 ABC TV movie, where she played the role of Sarah Phoenix, a terminally ill woman living life to the fullest. Peet was a member of the cast of the television series Studio 60 on the Sunset Strip, which premiered on NBC on September 18, 2006. She starred with Matthew Perry, with whom she had worked in The Whole Nine Yards and The Whole Ten Yards, and Sarah Paulson, with whom she previously co-starred in Jack & Jill and in "Griffin & Phoenix". In Studio 60, Peet's character Jordan McDeere was the newly appointed president of the National Broadcasting System (NBS). In 2007, she received a Satellite Award nomination for Best Actress - Television Series Drama for her performance in the show.

In 2007's The Ex, a romantic comedy, Peet played an attorney who stays home to raise a new baby. The film was released on May 11, 2007 and also starred Zach Braff, Charles Grodin and Jason Bateman. The film generally received negative reviews from critics[19] and had an international gross of $5,142,074.[20]

Peet next appeared as an FBI agent in The X-Files: I Want to Believe in 2008.[21][22][23] She was cast in Nigel Cole's Five Dollars a Day (2008), in which she starred as a beautiful young woman named Maggie, who is the girlfriend of Alessandro Nivola's character. The film opened at the 2008 Toronto International Film Festival. Actors Christopher Walken and Sharon Stone also co-starred in the film. Also that year, Peet released the crime drama film What Doesn't Kill You, in a limited release. Her character was Stacy Reilly. The film received generally favorable reviews[24] and Peet's performance was praised by Lisa Schwarzbaum of Entertainment Weekly, who wrote that she "is terrific as Brian's worn-down wife, sick of seeing her man disappear before her eyes."[25]

Peet starred in 2012, a 2009 disaster film directed by Roland Emmerich, alongside John Cusack and Danny Glover. In the film, she portrayed the character of Kate Curtis, a medical student and Jackson's ex-wife.[26][27][28] The film received mixed or average reviews from critics,[29] but had a $769,679,473 worldwide gross,[30] becoming Peet's biggest success at the box office.[31] In an interview with Femail, she said about the film: "this movie is like going on a roller coaster. Though I can't anymore myself, I get sick! But it's a controlled way of scaring yourself. So in a safe, controlled environment, you can really enjoy being scared. In a masochistic way."[32]

In the 2010 independent comedy-drama film Please Give, Peet co-starred with Catherine Keener and Rebecca Hall; she played a self-centered cosmetologist named Mary. Please Give received a limited release in March 2010 after it was screened out of competition at the 60th Berlin International Film Festival. The film received critical acclaim; Ethan Alter of Film Journal International wrote that Peet "does career-best work here ."[33] Peet and the other Please Give cast members received a Gotham Award nomination for Best Ensemble Cast.[34] She guest appeared in the television series How I Met Your Mother episode "Jenkins", playing the title character.[35]

Peet next provided the voice for Rayna, one of the main characters of the 2010 animated educational sci-fi adventure film Quantum Quest: A Cassini Space Odyssey, which was opened on January 13, 2010 in the United States. Peet joined the cast of the live-action family adventure film Gulliver's Travels. She appears with Jack Black, Jason Segel and Emily Blunt.[36] The film was released on December 25, 2010 in 3D.[37] Her character is Darcy Silverman, Jack's editor, and potential love interest.[38] Peet was cast as a lead in NBC's Bent.[39] The series was cancelled after six episodes on May 11, 2012.[40]

In 2012 and 2013, Peet had a recurring role as Capt. Laura Hellinger in seven episodes of the fourth season of the critically acclaimed CBS legal drama The Good Wife. Peet made her playwriting debut with the new play The Commons of Pensacola starring Blythe Danner and Sarah Jessica Parker.[41] Its final performance occurred February 9, 2014.[42][43] She co-starred in the film Trust Me, written and directed by Clark Gregg, which debuted at the Tribeca Film Festival in April 2013 and had a limited U.S. release in June 2014.

Peet joined Brockmire in May 2016, playing the owner of a Minor League Baseball team.[44]

Peet has co-written a children's book Dear Santa, Love, Rachel Rosenstein about a Jewish girl during the Christmas season. The book was launched in 2015.[45]

In 2008, Peet volunteered to be a spokeswoman for Every Child By Two (ECBT), a non-profit organization that advocates childhood vaccination. Peet began working with the group after becoming concerned by the "amount of misinformation floating around, particularly in Hollywood."[56] In an interview with Cookie, Peet stated: "Frankly, I feel that parents who don't vaccinate their children are parasites," referring to the benefit unvaccinated children derive from herd immunity and the concern that dropping vaccination rates may put all children at increased risk of preventable disease.[56] Peet's comments stirred controversy; in response, she apologized for using the term "parasites", but affirmed her position on the importance and safety of vaccinations.[57][58]

The 3rd Annual Independent Investigative Group IIG Awards recognizing the promotion of science in popular media was held on May 18, 2009. The IIG presented an award to Peet for her work campaigning for vaccines.[59]