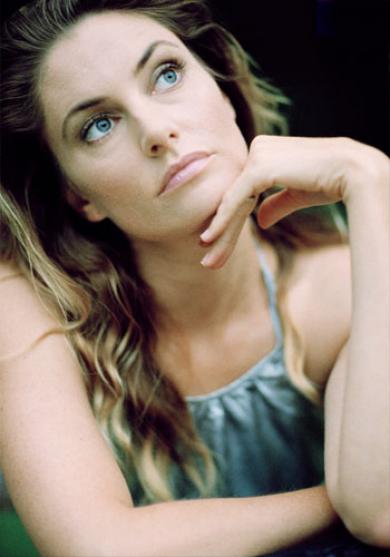 Amick was born in Sparks, Nevada,[1] a few miles east of Reno, the daughter of Judy (née Ross), a medical office manager, and Bill Amick, a musician.[2] Amick's parents are partly German;[3] the name Mädchen, which means "girl" in German, was chosen by her parents, because they wanted an unusual name.[4] She is also of Norwegian, Swedish, English and Irish descent.[5] As a young girl, Amick was encouraged by her parents to follow her creative instincts. She learned to play the piano, bass, violin and guitar and took lessons in tap, ballet, jazz and modern dance. In 1987, at the age of 16, she moved to Los Angeles to pursue a career in acting.
Read more...

After moving to Los Angeles, Amick began her career with guest roles on Star Trek: The Next Generation (1989) and Baywatch (1989). Amick got her first break when director David Lynch chose her to play waitress Shelly Johnson on the television series Twin Peaks (1990-1991). Amick's character endured physical abuse at the hands of her criminal husband, Leo, and was one of the most popular characters. Amick went on to work twice more with Lynch—reprising her role as Shelly in the prequel film Twin Peaks: Fire Walk with Me (1992) and in 7 episodes of the 2017 Twin Peaks revival series.

In 1990, Amick was cast as Mandy in Don't Tell Her It's Me and portrayed Amy in Tobe Hooper's horror film I'm Dangerous Tonight. In 1991, Amick was cast in The Borrower. In 1992, Amick portrayed the heroine Tanya Robertson in the Stephen King horror movie Sleepwalkers. The following year, she starred in the thriller film Love, Cheat & Steal (1993).

Amick at the 2017 WonderCon

In 1993, Amick was cast as Lena Mathers in the feature film Dream Lover, a thriller in which she co-starred with James Spader. In 1995, she and Spader were reunited in the TV movie The Courtyard. That same year, Amick appeared in the romantic comedy French Exit. In 1996, Amick was cast in the science fiction thriller Bombshell. Amick's return to network television came in the fall of 1995 with the much-publicized CBS primetime soap opera Central Park West. In 1997, Amick starred in the film Wounded. In 1998, Amick starred in the updated edition of Fantasy Island.[6]

After a decade of roles that failed to ignite the publicity Twin Peaks had, Amick gradually became a noticeable face in television with recurring roles on Gilmore Girls, ER, Jake in Progress, and Joey. In 2006, Amick was a regular in the sitcom Freddie which was subsequently cancelled.

Amick guest-starred in a number of episodes of the serial thriller Kidnapped on NBC, playing a strange and deadly assassin. She also had a recurring role in the second season of Dawson's Creek as the lead character's substitute film studies teacher. In 2007, she had a lead role in the short-lived CBS musical series Viva Laughlin.

Amick had a recurring role in season 2 of Gossip Girl as Nate Archibald's "cougar" love interest,[7] and she also appears in the second season of the Showtime series Californication. In 2008, Amick starred as Christian Slater's wife on the NBC series My Own Worst Enemy. In 2010, Amick played Danielle Marchetti on the FX series Damages.

In 2011 she appeared in the post-apocalyptic film Priest.[8] In 2013, Amick began starring in the Lifetime supernatural drama Witches of East End opposite Julia Ormond, Rachel Boston and Jenna Dewan-Tatum.[9][10] Amick's character Wendy Beauchamp was originally a guest star, but she later became a permanent character after shooting the pilot episode.[11] On August 6, 2015 Amick joined the cast of American Horror Story: Hotel as a mother whose son is ailing.[12] Since 2017, Mädchen has starred as Alice Cooper, Betty Cooper's mother, on the CW television series Riverdale.

David Alexis and Mädchen Amick have been married since December 16, 1992. Together they have two kids, a son Sylvester (born July 5, 1992) and a daughter Mina (born September 2, 1993). Amick's daughter, Mina Tobias, is a musician. In 2015, Tobias released her single "Freedom"[13] and filmed a music video paying homage to Twin Peaks.[13]