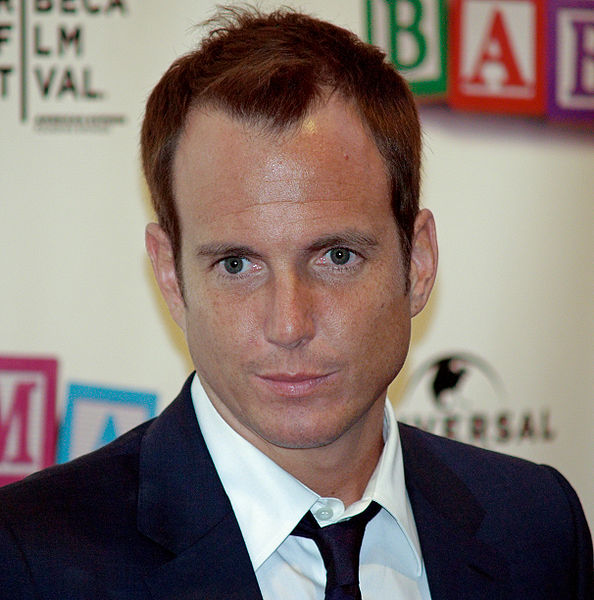 Arnett was born in Toronto, Ontario,[2] the son of Edith Alexandra "Alix" (née Palk) and Emerson James "Jim" Arnett, who was a corporate lawyer and brewer, among other occupations.[3][4][5] His parents were originally from Winnipeg, Manitoba, and he has roots on both sides of his family in Manitoba going back many generations.[6] Arnett has two older sisters and a younger brother.[7] His father, a graduate of Harvard University and corporate lawyer, served as the president and CEO of Molson Breweries from 1997 to 2000.[8]

Arnett briefly attended Lakefield College School in Lakefield, Ontario, but was asked not to return after a semester for being a troublemaker.[9][10] The Subway Academy II allowed him to take theatre classes at the Tarragon Theatre. He eventually graduated from Leaside High School and attended Concordia University, Montreal for a semester, but dropped out.[10] As a teenager, he was encouraged by his mother to pursue an acting career. He auditioned for commercials in Toronto and enjoyed acting. In 1990, he moved to New York City to study acting at the Lee Strasberg Theatre and Film Institute.[11] He appeared in plays in New York and his first acting role was in Felicity Huffman's independent film Erie, which was filmed on the Erie Canal.[12]

In February 1996, Arnett made his first television pilot with Kevin Pollak and his wife, Lucy Webb, for CBS, that was not picked up.[12] In 1999, Arnett starred in another pilot for The Mike O'Malley Show on NBC as the protagonist's friend Jimmy. The show was picked up, but was canceled after only two episodes. Arnett has referred to 2000, the year after that show was cancelled, as "the darkest year of life" and he admits that he "didn't get a lot of work" and "drank those years away."[12] In summer 2000, a friend helped pull Arnett out of his battle with alcoholism, and he began to get his career back on track.[13] In 2001, Arnett was cast in the CBS television pilot, Loomis as the slacker brother of a local news reporter (Cheri Oteri), that was not picked up. In 2002, Arnett was cast in a fourth television pilot which was for the CBS sitcom Still Standing, which was picked up and ran for several seasons, but his character was cut from the series after the pilot.[2] Arnett became so frustrated, after his fourth failed pilot, that he "swore off pilots"[2] altogether, until his agent persuaded him to audition for the pilot for Arrested Development.

In 2003, Arnett found mainstream success in television when he played George Oscar "Gob" Bluth II in the Fox comedy series, Arrested Development and in 2006 he was nominated for his first Emmy[14] The show was cancelled after three seasons due to low ratings, despite its critical acclaim and cult following.[15] He also played Max the Magician in Sesame Street, in a nod to Gob Bluth's penchant for using Europe's "The Final Countdown" during his magic shows. According to a 2006 interview with the Los Angeles Times, Arnett's two favorite episodes of the show were "Pier Pressure" and "Afternoon Delight".[16] His exposure on Arrested Development led to a number of larger roles in feature films. Though having worked in drama, his role for Arrested Development is still comedy, and he often portrays smug antagonists. He "never considered himself a comic" and considers himself an "actor first".[17] In 2002, prior to Arrested Development, Arnett guest-starred in The Sopranos and Law & Order: Special Victims Unit[18] In 2006, Arnett starred in his first leading role in Let's Go to Prison, directed by Bob Odenkirk, made on a budget of US$4 million.[19] It earned more than US$4 million at the box office and more than US$13 million in rentals.[20] In Blades of Glory, Arnett and his wife, Amy Poehler played brother/sister ice-skating pair with an incestuous relationship. The film was No. 1 at the U.S. box office during its first two weeks,[21] and grossed approximately US$118 million domestically during its theatrical run.[22] and US$36 million on home video.[23] He guest-starred in King of the Hill and 30 Rock, in which he was nominated for four Emmy Awards for Outstanding Guest Actor in a Comedy Series. Arnett also played supporting roles in the films Spring Breakdown, Hot Rod, The Comebacks, and On Broadway, where he once again worked with his close friend and director Dave McLaughlin. In The Brothers Solomon, he again teamed with Odenkirk and starred with Saturday Night Live member, Will Forte. He appeared in a major supporting role in the basketball comedy Semi-Pro, his second film with Ferrell.[24] He plays Lou Redwood, the commentator of the team, who is "a former player, a bit of a womanizer, and a boozer".[25] On November 17, 2009, it was announced that Arnett would try to win over real-life wife Amy Poehler in a guest spot on Parks and Recreation. Arnett played Chris, an MRI technician and possible love interest for Poehler's Leslie Knope. Justin Theroux appeared in the same episode as yet another suitor. Arnett signed on for one episode, and the episode entitled "The Set Up" aired January 14, 2010.[26] In 2010, Arnett and former Arrested Development co-star Jason Bateman created DumbDumb Productions, a production company focusing on digital content. Their first video was "Prom Date," the first in a series of "Dirty shorts" for Orbit (gum).[27]

He also starred in Running Wilde which was cancelled in January 2011, due to poor ratings[28] as well as The Increasingly Poor Decisions of Todd Margaret with David Cross. On March 23, 2011, Arnett appeared in the 2nd to last episode, The Office season 7.[29] Arnett co-starred in the NBC television comedy series Up All Night, about a couple who struggle to balance their home lives (especially with their newborn child) and their work ones. He is currently the spokesman of a series of Hulu advertisements and his role in television spots deliberately recalls Devon Banks as a power-hungry manipulator. In March 2012, Mansome, Arnett's first executive-producer credit with Jason Bateman, was announced as a Spotlight selection for the Tribeca Film Festival.[30] The documentary, directed by Morgan Spurlock, is a comedic look at male identity as it is defined through men's grooming habits featuring celebrity and expert commentary. He had been attached to play the lead role of David Miller in the 2013 comedy We're the Millers, but had to pass due to "scheduling reasons"; the part went to Jason Sudeikis. He co-starred as Vern Fenwick in the 2014 film Teenage Mutant Ninja Turtles and its 2016 sequel, Teenage Mutant Ninja Turtles: Out of the Shadows.[31] Arnett starred in the CBS sitcom The Millers, which lasted for two seasons. In 2016, he co-created, co-wrote and starred in the Netflix original series Flaked, which received praise from viewers and negative reviews from critics.[32]

In 2017, Arnett was cast in the recurring role of Mr. Quagmire on the Netflix comedy drama series A Series of Unfortunate Events.[33]

Arnett's distinctive gravelly voice has earned him voice-over work for CBS television promos, film trailers and numerous advertisements, including Lamisil medication. Perhaps most recognizable is Arnett's voice saying, "It's not more than you need, just more than you're used to" in ads for GMC trucks.[34] He has also lent his voice to a number of television shows, such as Ghostwriter in the 2005 Nickelodeon's hit series Danny Phantom, Duncan Schiesst for the Comedy Central animated program Freak Show, which was created by and also stars the voice of his Arrested Development co-star, David Cross. Arnett was the announcer for the faux trailer "Don't" in the 2007 film Grindhouse. He has also voiced characters in animated films, including Vlad in Horton Hears a Who!,[35] The Missing Link in Monsters vs. Aliens, Horst the German sous-chef in Ratatouille and Mr. Perkins in Despicable Me. He planned to be the voice of the K.I.T.T. in Universal's Knight Rider, a sequel to the popular 1980s television series. The production featured a Ford Mustang as K.I.T.T. Since Arnett had a previous long standing relationship with competitor automaker General Motors as the voice for GMC Trucks commercials, GM asked Arnett to pull out of the project. Arnett opted to withdraw from the project and he was replaced by Val Kilmer.[36] Arnett made a commercial cameo for the video game Call of Duty: Modern Warfare 2.[37]

In 2009, he voiced the title character in Eat Lead: The Return of Matt Hazard, a video game developed by Vicious Cycle Games and starred as an out of work former video game protagonist hoping to make a comeback, versus a greedy game executive played by Neil Patrick Harris. In the Fox animated comedy series Sit Down, Shut Up, he voiced Ennis Hofftard, a bodybuilder who teaches English and always attempts to chase women.[38] The show premiered on April 19, 2009 but was eventually cancelled after several months due to poor ratings. It aired its last episode on free-to-air television on November 21, 2009.[38] Arnett lent his voice to Batman in the film The Lego Movie, making him the second Canadian actor to portray Batman in a film, after Bruce Greenwood first did so in the animated film Batman: Under the Red Hood; Arnett reprised the role in The Lego Batman Movie, a spin-off of The Lego Movie released in 2017.[39]

Arnett lists Steve Martin and Chevy Chase as his two biggest comic influences.[16] He grew up watching sports in Canada, and is an avid follower of the Toronto Maple Leafs and Toronto Blue Jays.[41]

Arnett is a dual citizen of Canada and the United States.[49]

In 2005, New York magazine named Arnett and then-wife Poehler "New Yorkers of the Year" during its annual New York Magazine Culture Awards.[51] In April 2007, during a panel hosted by The Paley Center for Media, talk show host Conan O'Brien and his writing staff named Will Arnett as one of their three all-time favorite guests, sharing the honor with Norm Macdonald and Harland Williams.[52] Also in April 2007, Entertainment Weekly named Will Arnett a "Future King of Comedy."[53] In May 2007, Best Week Ever ranked Arnett No. 9 on its "Top 15 Sexiest Nerd Boys" poll.[54] In July 2007, Premiere magazine named Arnett one of "The 20 Hottest New Faces in Comedy."[55]

Report a problem
Write to Will Arnett at FanPal • 2022