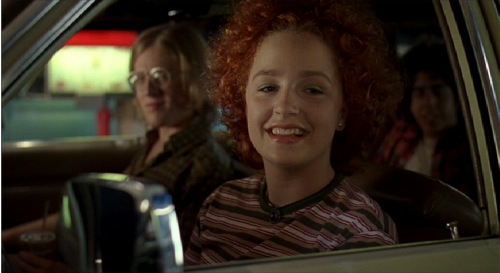 Marissa Ribisi (born December 17, 1974) is an American actress who performed in the films Dazed and Confused, True Crime, The Brady Bunch Movie, Pleasantville, and Don's Plum and television shows such as Felicity, Friends, Grace Under Fire, Watching Ellie, and Tales of the City. She is the twin sister of actor Giovanni Ribisi.

Ribisi was born Santina Marissa Ribisi in Los Angeles, California. Her mother, Gay (née Landrum), is a manager of actors and writers, and her father, Al Ribisi, is a musician.[1] Ribisi began acting when she was nine years old.[2] Her twin brother, Giovanni, is also an actor.[3] Like her husband and her brother, she is a Scientologist.[4]
Read more...

Ribisi first appeared on television in 1988, playing a minor red-haired character named Ginger in She'll Get Over It, an episode of My Two Dads. This was followed by similar brief appearances in Baywatch ("Old Friends" 1990), DEA (1991), and the miniseries Tales of the City (1993), playing a receptionist.[citation needed]

Ribisi's first role in a feature film was in the 1993 film Dazed and Confused. She starred alongside Matthew McConaughey and Adam Goldberg, who were then, like Ribisi, unknowns.[5] The actress played Cynthia, a socially marginalized girl who runs with two verbose outsiders (Goldberg and Anthony Rapp).

In 1998, Ribisi cowrote the film Some Girl and starred in it alongside Juliette Lewis, Michael Rapaport, and Giovanni Ribisi. The film, directed by Rory Kelly, relates the story of insecure young women searching for long-term relationships in 1990s Los Angeles. She has had roles in the films True Crime, The Brady Bunch Movie, Pleasantville, and Don's Plum. She has also appeared in television shows such as Felicity, Friends, Grace Under Fire, and Watching Ellie, as well as the TV miniseries Tales of the City.[5]