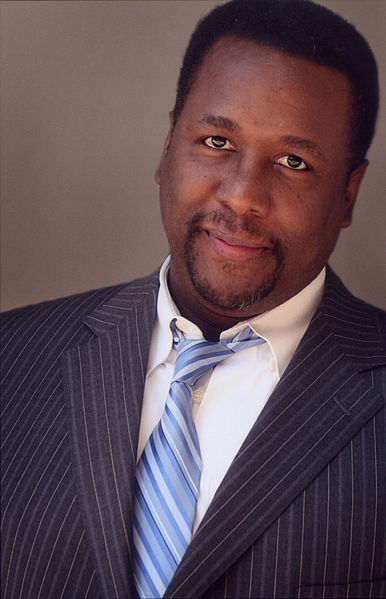 Wendell Edward Pierce (born December 8, 1963) is an American actor. He is known for his roles in Suits as high-powered attorney Robert Zane, in HBO dramas such as Detective Bunk Moreland in The Wire and trombonist Antoine Batiste in Treme, and as Michael Davenport in Waiting to Exhale. Pierce also had a starring role as Teddy on the CBS sitcom The Odd Couple.

Pierce was born in New Orleans, Louisiana, one of three sons of a teacher and a decorated World War II veteran who worked as a maintenance engineer.[1] His father's segregated Army unit helped Marines win the Battle of Saipan in 1944. Pierce has said of his father's experience: "When the country wasn't loving my father, my father was loving his country. It's the ultimate act of patriotism."[2]

Pierce was raised in the black middle-class community of Pontchartrain Park, the first African-American post-war suburb. His father, along with many black veterans, moved into the neighborhood after returning home from the war. The neighborhood was wiped out during Hurricane Katrina in 2005, including Pierce's family home, which was flooded by 14 feet of water.[3][4]

Pierce graduated in 1981[5] from both Benjamin Franklin High School[6] and the New Orleans Center for Creative Arts (most NOCCA students attend traditional secondary school in the mornings and the arts school in the afternoons). In 1981, Pierce was named a Presidential Scholar of the Arts.[7] As a young actor, he appeared in The Winter's Tale at the Tulane Shakespeare Festival. He produced and hosted Think About It, a youth-themed talk show, for the local NBC affiliate station, and also hosted a weekly jazz show on WYLD-FM Radio called Extensions from Congo Square.[8]

He then attended the Juilliard School's Drama Division from 1981 to 1985, where he graduated as a member of Group 14 with a Bachelor of Fine Arts.[9]

Pierce has been in over 30 films, appeared in nearly 50 television shows and has performed in dozens of stage productions. He worked on the HBO dramas The Wire and Treme. He appeared in The Twilight Saga: Breaking Dawn - Part 2 as "J. Jenks".[10]

For his role in Treme, Pierce learned to play the trombone, though he relied on "sound double" Stafford Agee of the Rebirth Brass Band.[3] Agee played off-camera for Pierce, syncing his trombone with Wendell's motions for authenticity.[11]

Pierce was nominated for an Independent Spirit Award for Best Male Lead for his portrayal of "Joe" in Four, playing a married, closeted gay man who steps out on his family with a young white man he met online. The film was released on September 13, 2013, around the same time that The Michael J. Fox Show debuted on NBC, in which Pierce played Michael J. Fox's character's boss until the show's cancellation some five months later.[12][13]

Pierce has been in numerous stage productions. He was lauded for his performance as Holt Fay in Queenie at the John F. Kennedy Center. He has performed on Broadway in staged productions of The Piano Lesson, Serious Money and The Boys of Winter. He has performed off-Broadway in The Cherry Orchard (for which he was nominated for a VIV Award for Lead Actor), Waiting for Godot (which was set on a New Orleans rooftop post-Hurricane Katrina), and Broke-ology, performed at Lincoln Center for the Performing Arts.[14]

Other performances include Cymbeline (at The Public Theater), The Good Times Are Killing Me, Two Gentlemen of Verona, Tis Pity She's a Whore, and Ms. Ever's Boys performed at the ACT Theatre.

Pierce is also a theater producer, having produced the Broadway show, Clybourne Park. The show was nominated for four Tony Awards. It went on to win the Tony Award for Best Play in 2012. [15]

In 2015, Pierce returned to the stage to star in the Billie Holiday Theatre production of Jackie Alexander's Brothers from the Bottom in New York. [16]

Pierce considers himself a "true capitalist" and a "classic entrepreneur."[3][4]

Inspired in part by Michelle Obama's initiative to bring more supermarkets to "food deserts" - where residents lack easy access to fresh produce - Pierce, along with two partners (Troy Henry and James Hatchett), started a chain of grocery stores, Sterling Farms, in the Ninth Ward of New Orleans in 2012.[19] Sterling Farms also has a convenience store division called "Sterling Express." The stores are named after Sterling Henry, his business partner's father who ran a pharmacy for about 40 years in the Lower Ninth Ward.[20]

Pierce describes himself as "tri-coastal", splitting his time among Los Angeles, New York City, and New Orleans.[21] He is a supporter of the New Orleans Saints, and locals have nicknamed him "Saints Wendell".[19] He is also an avid supporter of St. Patrick's Athletic FC.[22]

Pierce attended the 2012 Democratic National Convention, was one of President Barack Obama's top campaign fundraisers in 2012, and once escorted Gwen Ifill to a White House State Dinner.[4][23][24]

When first cast in The Wire, Pierce and his castmates doubted the show would be a hit: "I remember the first time we all sat around and watched the pilot. We all turned to each other and said, 'Man, I don't think this shit is going anywhere.'"[19]

On Sunday, May 15, 2016, Pierce was arrested and charged with simple battery for an alleged attack against a female Bernie Sanders supporter outside Atlanta Lowes Hotel. He was booked and released on $1,000 bond from Fulton County Jail.[25][26] Pierce has been a vocal supporter of Hillary Clinton and is on the board for Alliance for a Healthier Generation, a campaign created by the Clinton Foundation.[27][28]