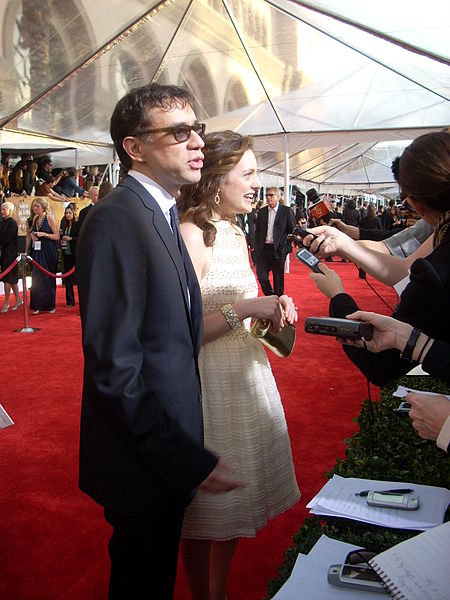 Fereydun Robert "Fred" Armisen[1] (born December 4, 1966)[2] is an American actor, comedian, writer, producer, and musician. He is best known as a cast member on Saturday Night Live from 2002 until 2013.[3] Armisen has portrayed characters in comedy films, including EuroTrip, Anchorman, and Cop Out. With his comedy partner Carrie Brownstein, Armisen is the co-creator and co-star of the IFC sketch comedy series Portlandia. Armisen founded ThunderAnt.com, a website that features the comedy sketches created with Brownstein, and is the bandleader for the Late Night with Seth Meyers house band, The 8G Band.

Armisen was born on December 4, 1966, in Hattiesburg, Mississippi. He moved with his family to New York as a baby[7] and briefly lived in Brazil in his youth. He was raised in Valley Stream, New York,[7] where he was a high school classmate of fellow SNL alumnus Jim Breuer.[8]

His mother, schoolteacher Hildegardt (Mirabal Level), is Venezuelan, with family from San Rafael de Atamaica, Apure.[9][10] His father, Fereydun Herbert "Fred" Armisen, who worked for IBM, was born in Soltau, Lower Saxony, Germany, to a German mother and a Korean-born father, Pak Yeong-In.[10][11][12] For much of his life, Fred had incorrectly thought his paternal grandfather to have been Japanese; his grandfather was actually born in Ulsan, Korea, and had adopted a Japanese name and persona after the Massacre of Koreans in 1923 when he was a high school student.[13][14] Pak was a prominent dancer and choreographer known as Masami Ehara (Japanese: 江原正美, Hepburn: Ehara Masami), pen name Masami Kuni (Japanese: 邦正美, Hepburn: Kuni Masami, or marked as Hangul: 방정미; RR: Bang Jeongmi; MR: Pang Chŏngmi), or birth name Bak Yeong-in (Hangul: 박영인; Hanja: 朴永仁; RR: Bak Yeongin; MR: Pak Yŏngin).[10] Masami studied esthetics in Tokyo Imperial University and became a professional dancer before moving to Germany.[15] He worked for Joseph Goebbels' Propaganda Ministry in Nazi Germany.[16][17] Pak Yeong-In's family were members of the Korean aristocracy, who could verifiably trace their lineage back to the 1600s.[10]

Armisen attended the School of Visual Arts in Manhattan[18] before dropping out to begin a career as a rock drummer.[7] He has mentioned watching the bands The Clash and Devo perform on television and wanting to be a performer since he was a child.[19]

In 1984, Armisen played drums in a local band along with his high school friends in Valley Stream, New York, but the group soon ended. In 1988, he moved to Chicago to play drums for the punk rock band Trenchmouth,[20] and in the 1990s, he played background drums with Blue Man Group.

While not playing with the band Trenchmouth, Armisen's interests switched to acting. In a January 2006 interview, he said, "I wanted to be on TV somehow. For some reason, I always thought it would be an indirect route; I didn't know that it would be comedy and Saturday Night Live. I just wanted to do something with performing that would lead me there."[24]

Armisen's subsequent television work, such as some "memorable Andy Kaufman-esque appearances"[25] on Late Night with Conan O'Brien, as well as work for Crank Yankers and Adult Swim, led to a role in 2002 as a featured player in the cast of Saturday Night Live.[25] In the 2004 season, he was promoted to repertory cast member status.

Fred participated in Sister City,[26] the fifth episode of the second season of "Parks and Recreation", broadcast on NBC in the United States in 2009.

Armisen has landed several minor yet memorable roles that were defined by an interviewer as "feral foreigners"[27] in comedy films such as Eurotrip, Deuce Bigalow: European Gigolo, Anchorman: The Legend of Ron Burgundy, Deck the Halls, The Ex, The Promotion, The Rocker, Tenacious D in The Pick of Destiny and Confessions of a Shopaholic.

In the Cartoon Network series The Looney Tunes Show, Armisen voices Speedy Gonzales. Armisen, along with Carrie Brownstein, appeared on the Simpsons episode "The Day the Earth Stood Cool", in which they play The Simpsons' new neighbors, who encourage everyone to be cool like them.[30][31]

Armisen's recent work as bandleader on Late Night with Seth Meyers has won him praise for his deadpan comedy, especially in his interplay with the host.[32]

Armisen joined the cast of Saturday Night Live in 2002, and is the second Latino cast member.[33] He was promoted to a repertory player in 2004. After 11 years as a cast member, he decided to leave the show. At the time of his 2013 departure from the show,[3] Armisen was tied with Al Franken (who was also in the cast for 11 seasons) as the third-longest tenured cast member (behind Seth Meyers and Darrell Hammond).[34] Armisen hosted the season 41 finale on May 21, 2016, with musical guest Courtney Barnett.

The following is a partial list of notable roles Armisen has played in Saturday Night Live sketches.

In 1998 he posed as a music journalist for the short film Fred Armisen's Guide to Music and South by Southwest. It was filmed by then-girlfriend Sally Timms and featured Armisen's "pranking musicians and industry types" during the South by Southwest Festival in Austin, Texas.[37] A year later, Armisen starred with alternative rock legend Steve Albini in Chevelle's Point #1 EPK.

Armisen is part of ThunderAnt, a comedy duo with Sleater-Kinney guitarist Carrie Brownstein. The duo specializes in creating comedic short skits often about independent vocations such as one man shows, feminist bookstores, and bicycle rights activists.

Armisen has directed music videos for bands like The Helio Sequence. Armisen also had a role in the Wilco documentary I Am Trying to Break Your Heart, which featured footage from his stint opening for front man Jeff Tweedy's 2001 solo tour. He also appeared in video segments on Blue Man Group's How to be a Megastar Tour 2.0. Armisen occasionally writes for Pitchfork Media and interviewed Cat Power for that company.[38] Fred appeared as Jens Hannemann on Jimmy Kimmel Live! on October 19, 2007, promoting a 28-minute DVD called Fred Armisen presents Jens Hannemann: "COMPLICATED DRUMMING TECHNIQUE".[39] In 2010, Armisen briefly joined Joanna Newsom's tour for her album Have One on Me as his character Jens Hannemann.[40] On SNL, Armisen often plays musical instruments in sketches, has two recurring characters who are musicians (Mackey the drummer from the Rialto Grande and Ferecito from Showbiz Grande Explosion), or impersonates famous figures in the music world such as Liberace, Phil Spector, Lou Reed, and Prince.

Armisen appeared in the official music video for Man Man's song "Rabbit Habits", playing a man who charms his blind date (Charlyne Yi) but runs away after she turns into a werewolf.[41]

Armisen performed as a singer/drummer/comedic actor in the Blue Man Group's "How to be a Megastar Live!". He played the part as a salesman on TV who advertises for the Megastar Rock Manual. He also drummed in the performance and was a backup singer.

In late 2014, Armisen was featured on the popular comedy web series Comedians in Cars Getting Coffee with host Jerry Seinfeld.

Armisen is a longtime fan of punk rock music and can be seen in the documentaries Salad Days and The Damned: Don't You Wish That We Were Dead.

In 2015, Armisen was the recipient of Smithsonian Magazine's American Ingenuity Award for Performing Arts.[42]

Armisen, as of March 2018, resides in the Silver Lake neighborhood of Los Angeles.[46] Prior to his move he was a resident of Portland, Oregon's Pearl District.[47] He has stated that he is an atheist.[48]

As a member of Trenchmouth: